We begin with a confrontation in which the Sailor Guardians ask reasonable questions, make reasonable deductions, and are met by some violent violin skills. It’s Sailor Moon Crystal! 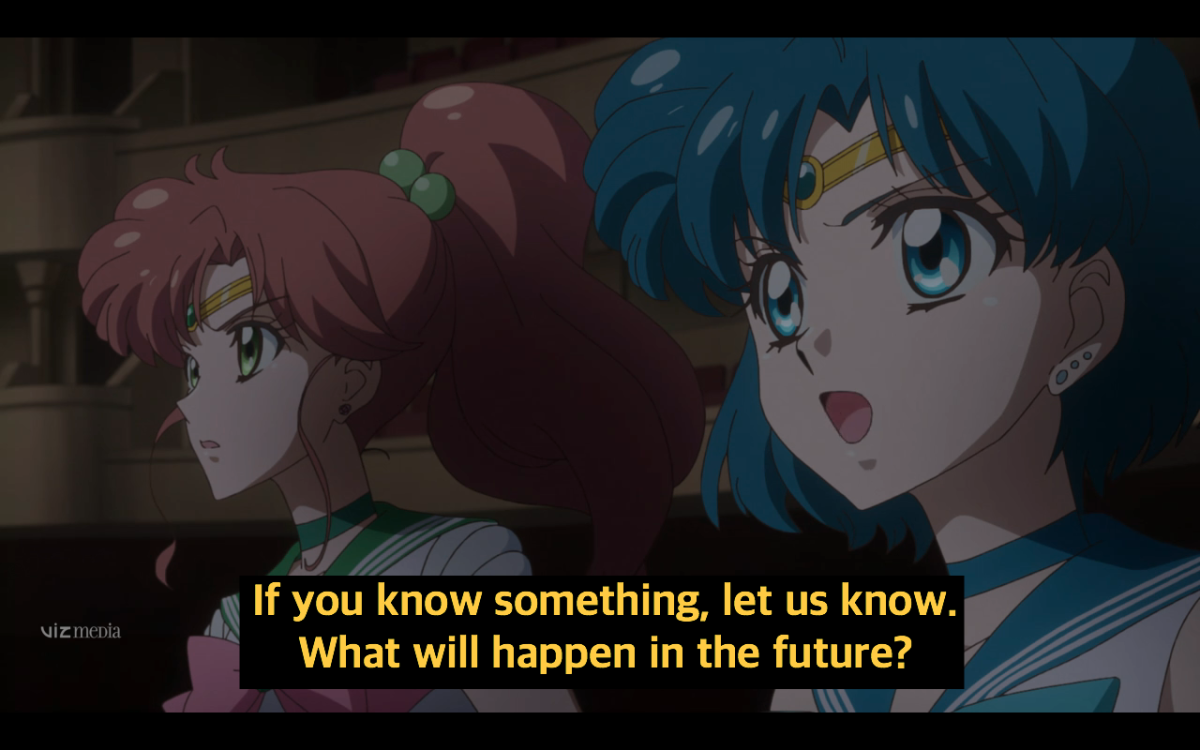 In keeping with the tradition of Michiru and Haruka being aloof and mysterious, all questions—who are you, what are you doing here, are you going to hurt us?—go unanswered except for the most obvious: yes, these are the Sailors Neptune and Uranus. The Senshi guess on their own that they’re here for the Death Busters and that the mirror is one of the talismans. But, growing bored or concerned or who-the-hell-knows, Michiru takes out her violin and screeches them into paralysis. Then, Uranus world-shakes them into oblivion. Hey, these guys are jerks! 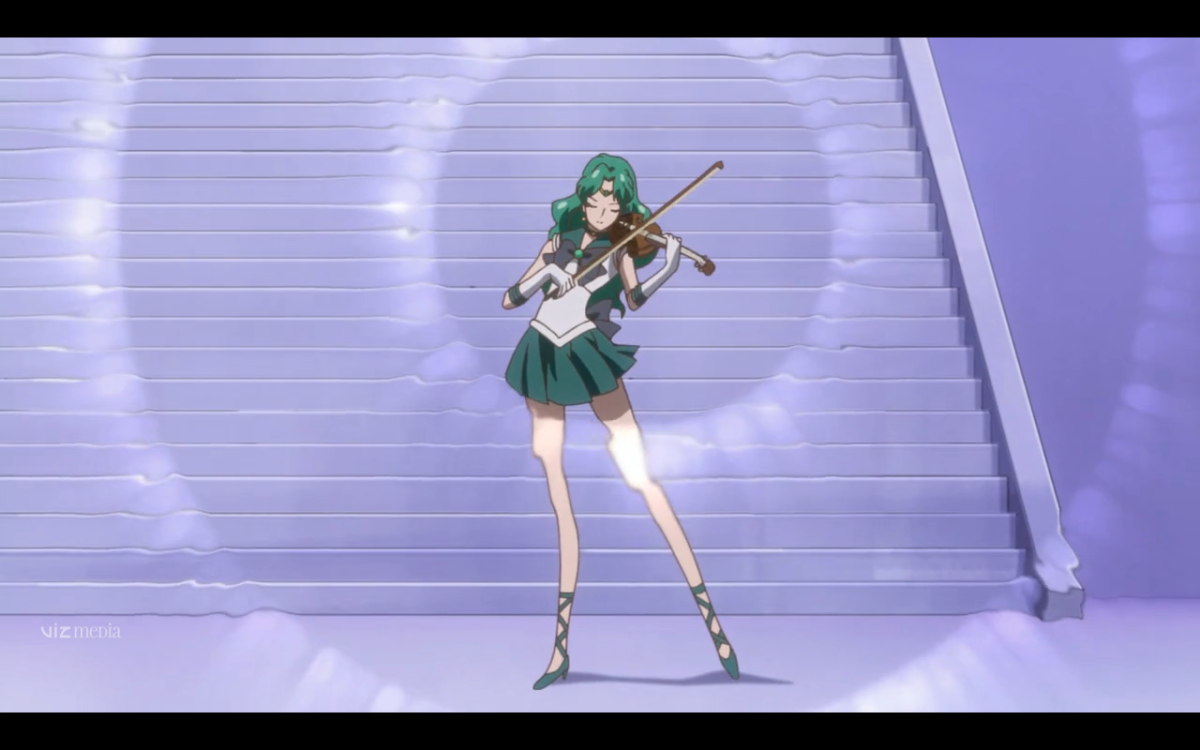 So sayeth the Inner Senshi, anyway, who decide that if they come across the Outers again, there’s gonna be a rumble. That’s quite reasonable. Usagi being Usagi, thinks that’s a terrible plan and that everyone should get along. Because this is Sailor Moon, that point of view is: (a) appealing and (b) going to be possible. Good job to the production team for making this somewhat believable, although I think my nostalgia/affection is really doing most of the hard work here. If I had never seen Sailor Moon before, this stance would seem laughably naive.

Yada yada yada more ominous dreams about destruction and the talismans. The atmosphere surrounding these dreams isn’t terribly ominous, but maybe I just feel indifferent because I know roughly what’s going to happen. 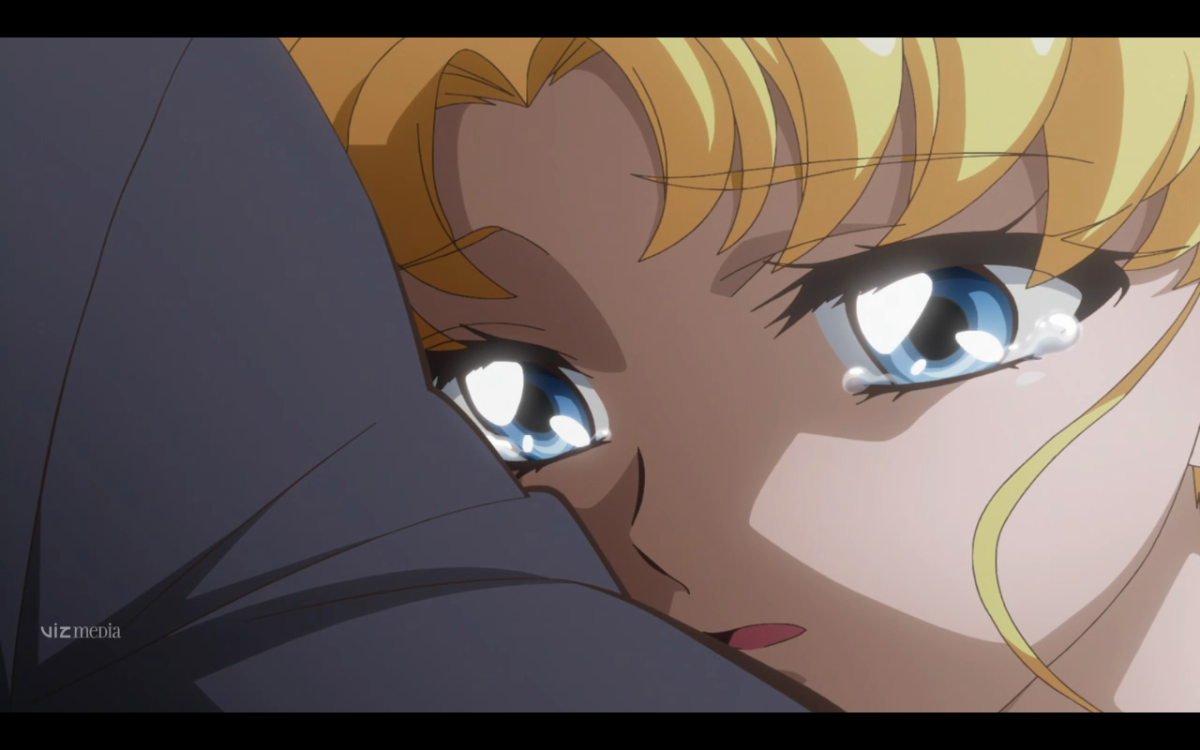 Usagi definitely recognizes that Haruka is Uranus now, and begs her for more information. Uranus responds by…coming on to Usagi. Strong. Jesus, it’s unsettling. And, while I’m pretty pleased to hear Haruka ask “does it matter if I’m a man or a woman?”, it’s complicated by the fact that Haruka is supposed to be extremely devoted to Michiru. Oh, sure, she flirted with plenty of people in the original, but never so intensely. Never like she meant it. She means it here and she’s not shy about it. It’s really uncomfortable watching her invade Usagi’s personal space, get right up in her face, even though she knows Usagi has a boyfriend/eternal soulmate. And when she leaves, Usagi starts crying into Mamo’s shoulder, out of fear or anxiety or just being overwhelmed. That’s really creepy. I don’t like this version of Haruka, not one bit. 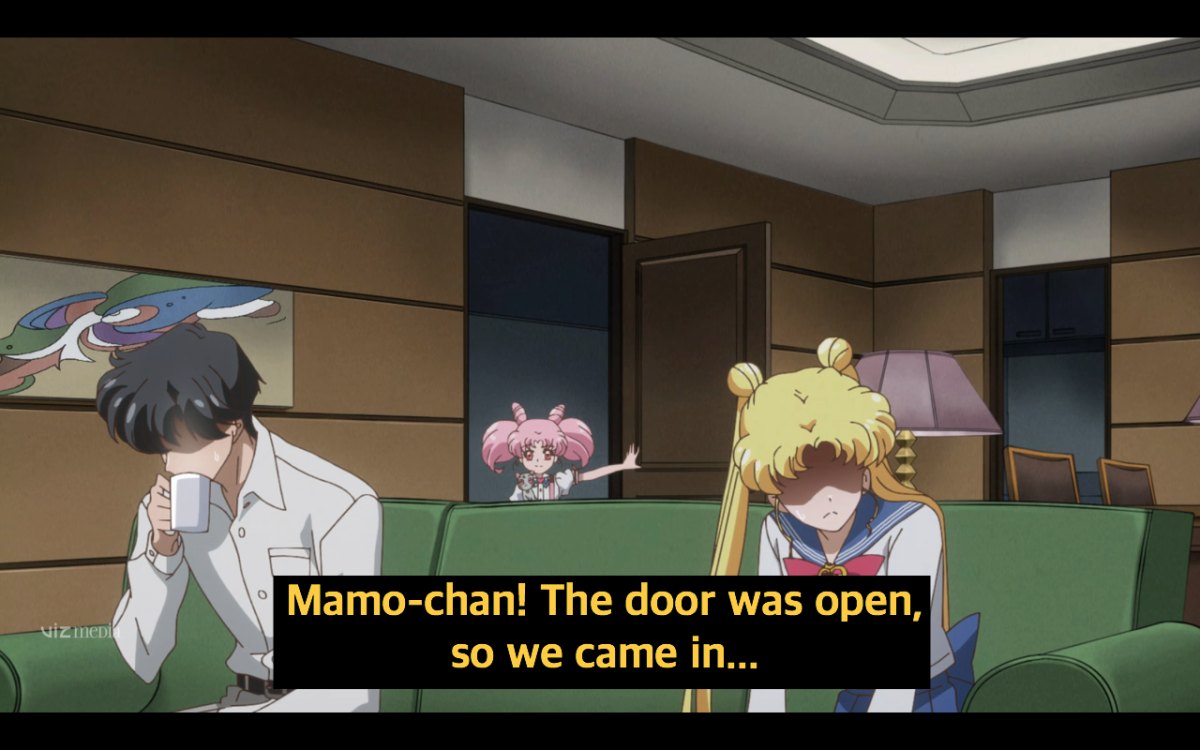 Chibi-Usa is making a clay pot for her art class, only she’s modeling it after the Legendary Holy Grail, which was apparently Neo Queen Serenity’s sippy cup or something. No, wait, it helped her in crises. Anyway, Chibi-Usa skips off to see Mamo, and finds her parents sitting in tense silence. Usagi is worried that Mamo is angry with her. So that’s awful, given that she didn’t do anything and Haruka all but forced another kiss on her. She apologizes for something that’s not her fault, but fortunately, Mamoru just says, “I trust you.” Then they both apologize for being jealous. Well, it could have been worse.

Fortunately, the creation of Chibi-Usa’s cup brings them back into synch and Mamo offers to let her stay the night. Er, isn’t she in middle school? Doesn’t her mom need to know where she is? Or, if not that, doesn’t she at least need to know where Chibi-Usa is?

Whatever, we live in the magical land where parents ain’t give a damn and we should be grateful that it’s not Disney, where they’d just be dead. 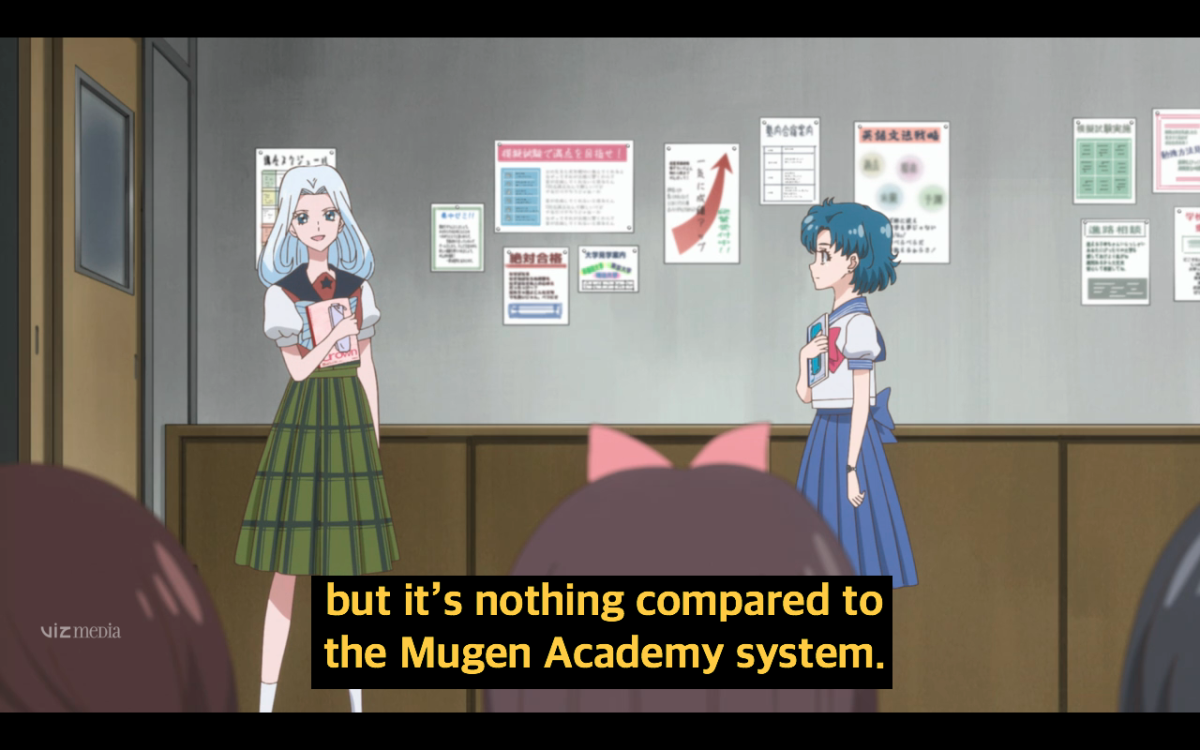 Finally, finally, we get to the meat of this week’s plot, with Ami-chan complaining about someone who beats her on exams. This mysterious Yui Bido introduces herself and suggests that Ami enroll in Mugen Prep as a potential student. Ami decides to go in to learn more about Mugen and everyone agrees that yes, they’ll stay at the base and just watch. Cool plan guys, no backup necessary.

Along their tour, they come across a miniature universe that apparently the science class created as an experiment? This is on par with Wesley Crusher randomly creating sentient nanites in an episode of Star Trek TNG. Just…yeah, it’s a universe in a box! Whoops! Welp, time for our next class, where we’ll be psychically reaching across time to channel one of Shakespeare’s lost plays! No big! 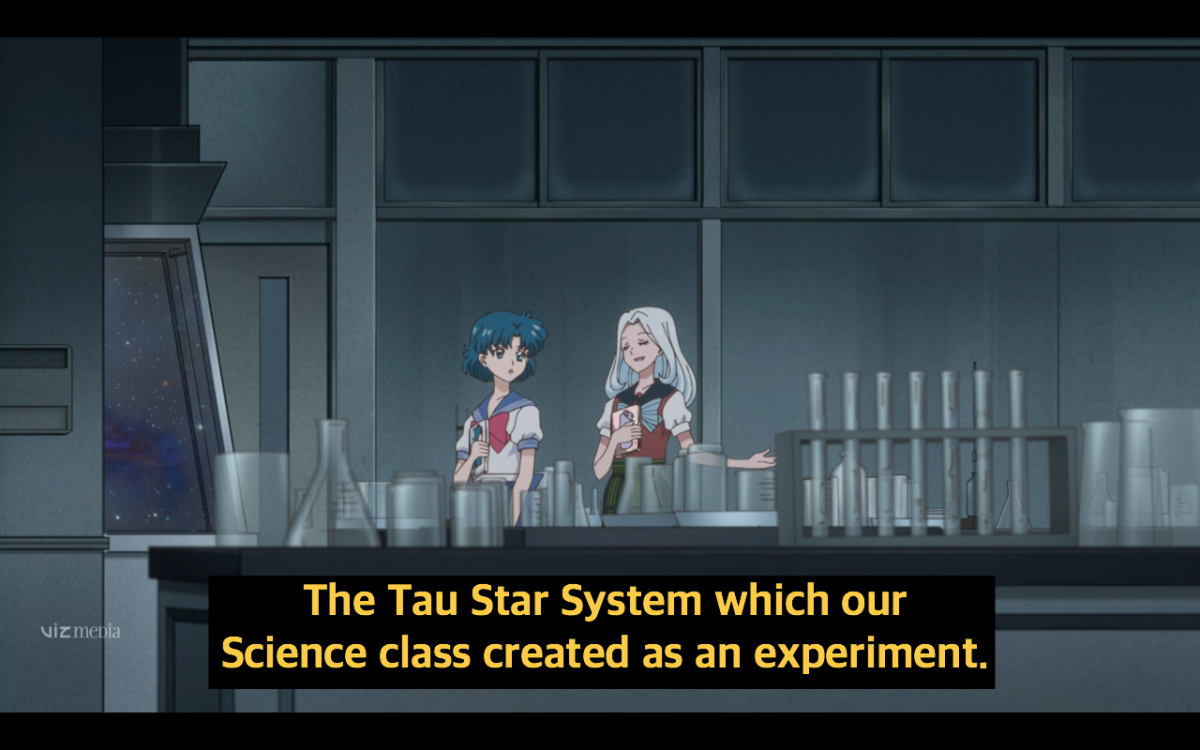 Viluy in disguise immediately susses out that Ami is a guardian. But not before she has to go report to Eudial, giving Ami a chance to do a little investigating. Ami, in a totally badass move, flings her pen at the security camera and disables it, even as Eudial is watching. Ami, you’re my forever girl.

This doesn’t prevent her from being captured, though. Viluy drags her into a computer room where she demonstrates the plan that probably took as long to think up as it did actually appearing on the screen—which is to say, about five seconds. They’re using a cram school to enchant Japanese children. That is literally what everyone would do. Japanese kids=cram school=zombies. There doesn’t even need to be magic involved.

Haruka and Michiru arrive just in time to save the day, distracting all these cram schoolers and freeing Ami. 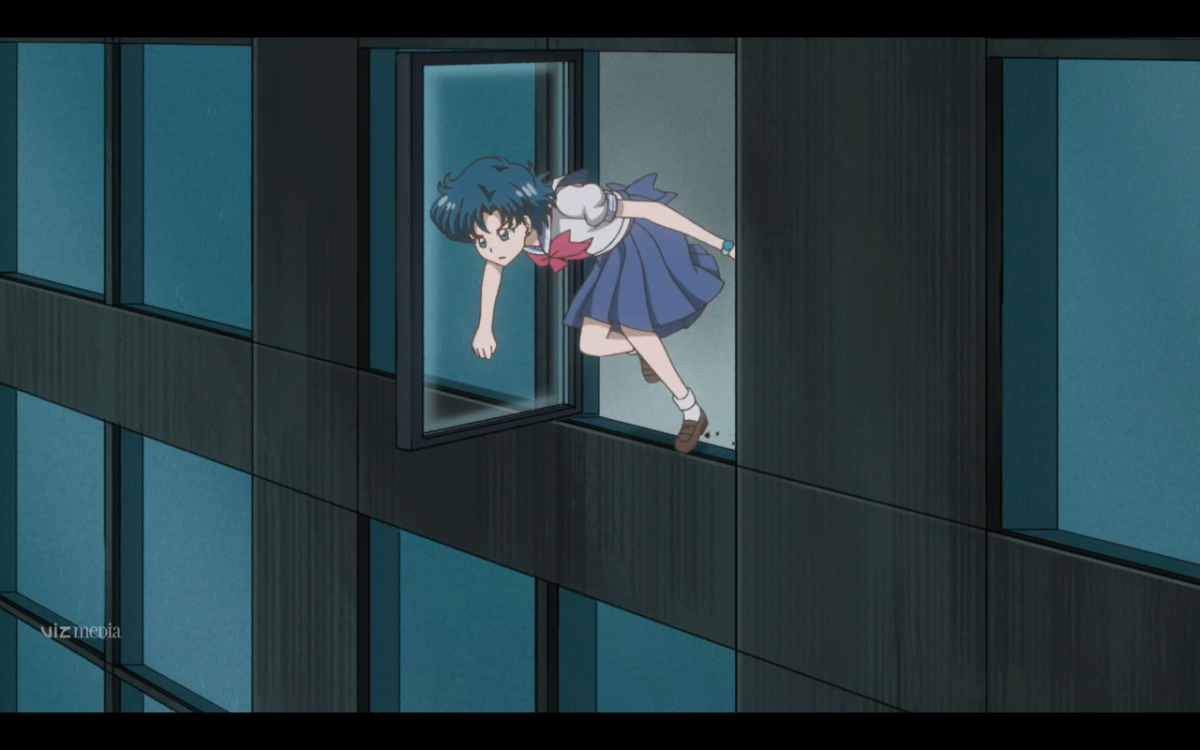 And oh my god, Ami jumps out a window without hesitation, calls on her power, lands in a pool, immediately transforms, and starts a battle. This is the greatest action I’ve seen in Sailor Moon, especially since Viluy is a match for her, anticipating her attacks with her own equivalent genius. She catches Mercury in a trap, but fortunately, the rest of the guardians arrive. They then have what would have been an equally cool battle, but they wasted so much time on all the dream crap that instead, Haruka just blasts them with her sword. Oh, and it’s also a talisman. Obvi. And they flee without giving any explanation. Typical! 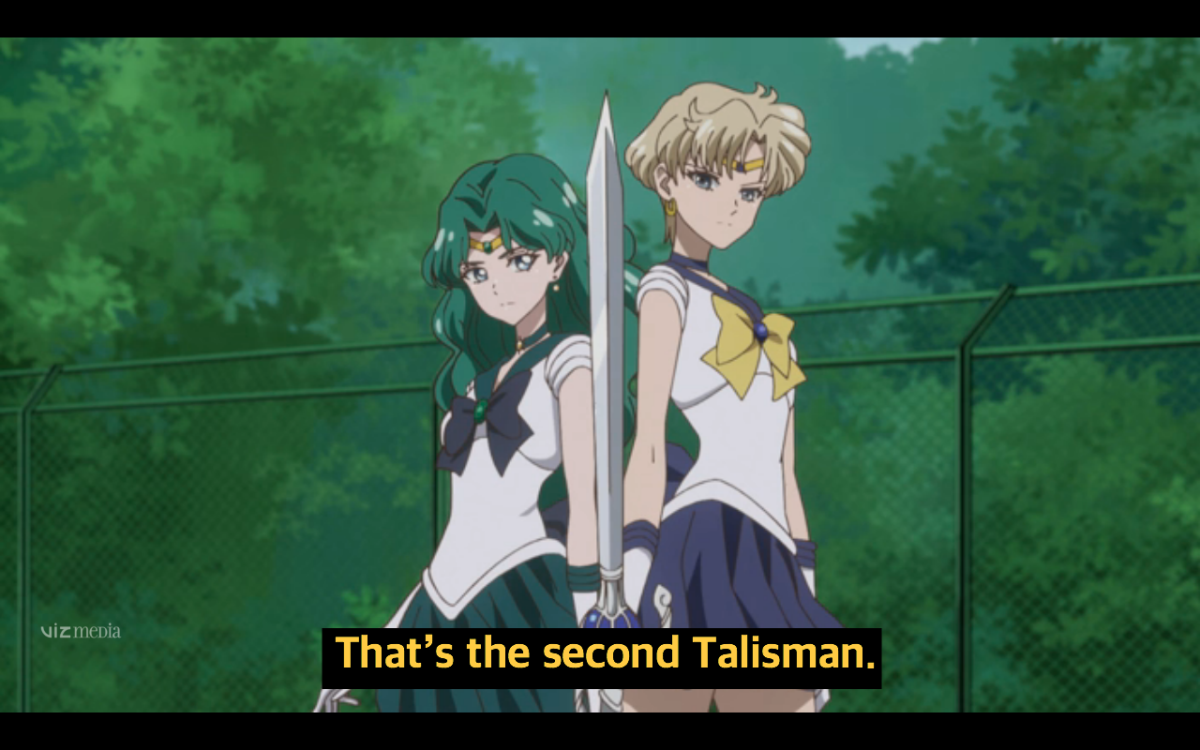 Michiru’s and Haruka’s cover is apparently blown (I don’t know why, they killed Viluy, who was the only one who would have known/remembered what happened), but fortunately, we have the penultimate Outer Senshi ready to step in and take over. It’s Setsuna, our dear Pluto! 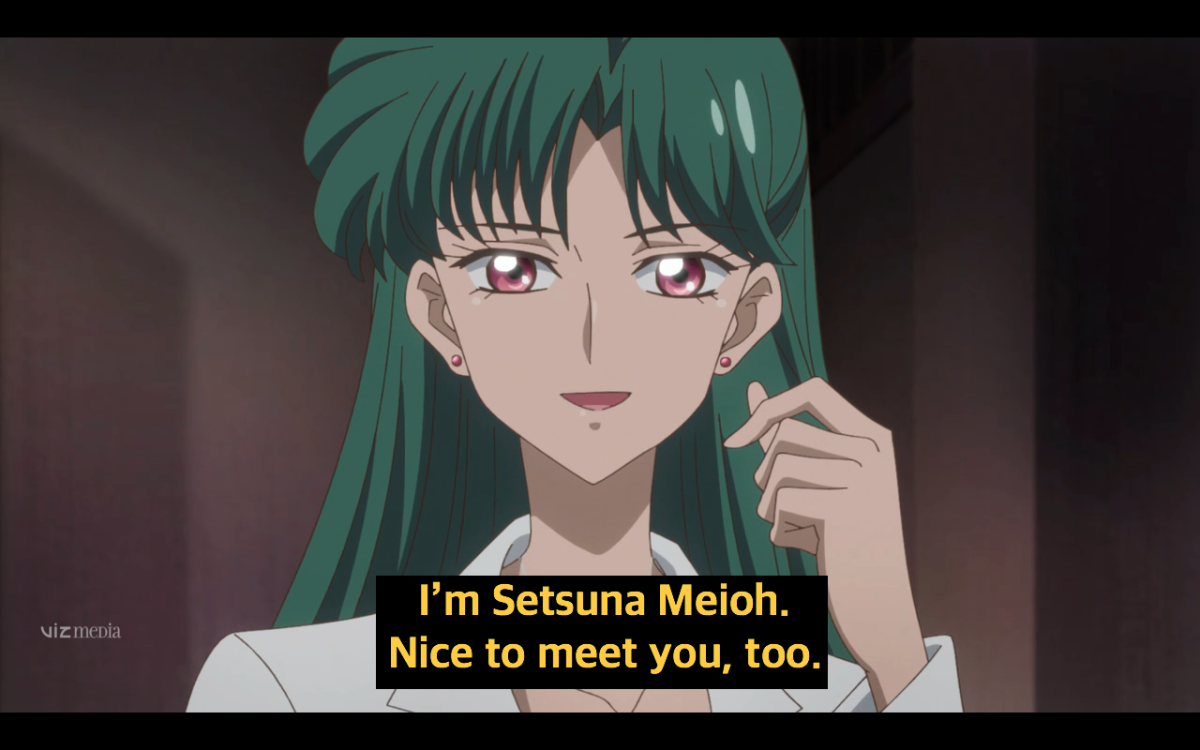 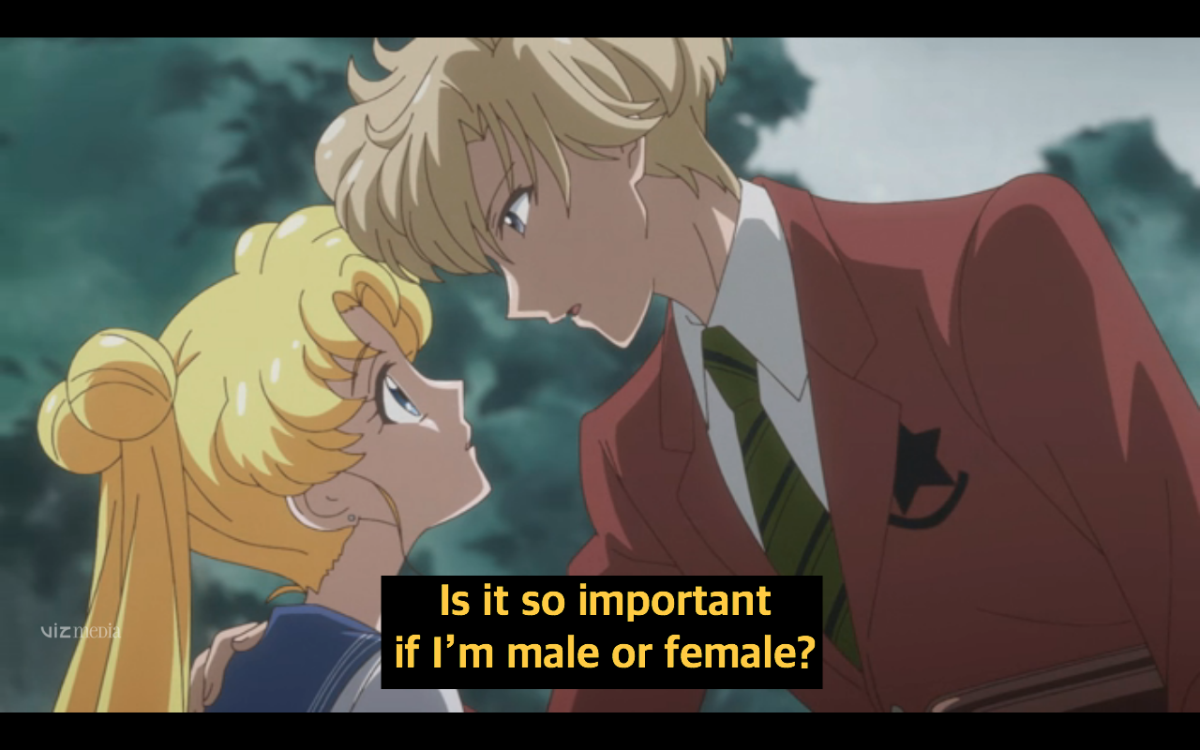 No, it only matters if you’re a creeper