A deity of Destruction, terrible dreams, and a couple of concerts—it’s episode four of Season Crystal!

Rei, our favorite resident psychic, has been having apocalypse-y dreams and thinks they shouldn’t collect the talismans, but Haruka’s voice keeps saying to do so. No one is sure what’s going on, especially not Usagi and Mamoru. Mamoru has also been a focus for these dreams (although everyone’s been having them somewhat), but he doesn’t know what to make of them, and he gets distracted by the mysterious Michiru—not genuinely, romantically distracted, just…caught off guard, I suppose. She is a super hot famous violinist who they all knew in their previous lives, after all. 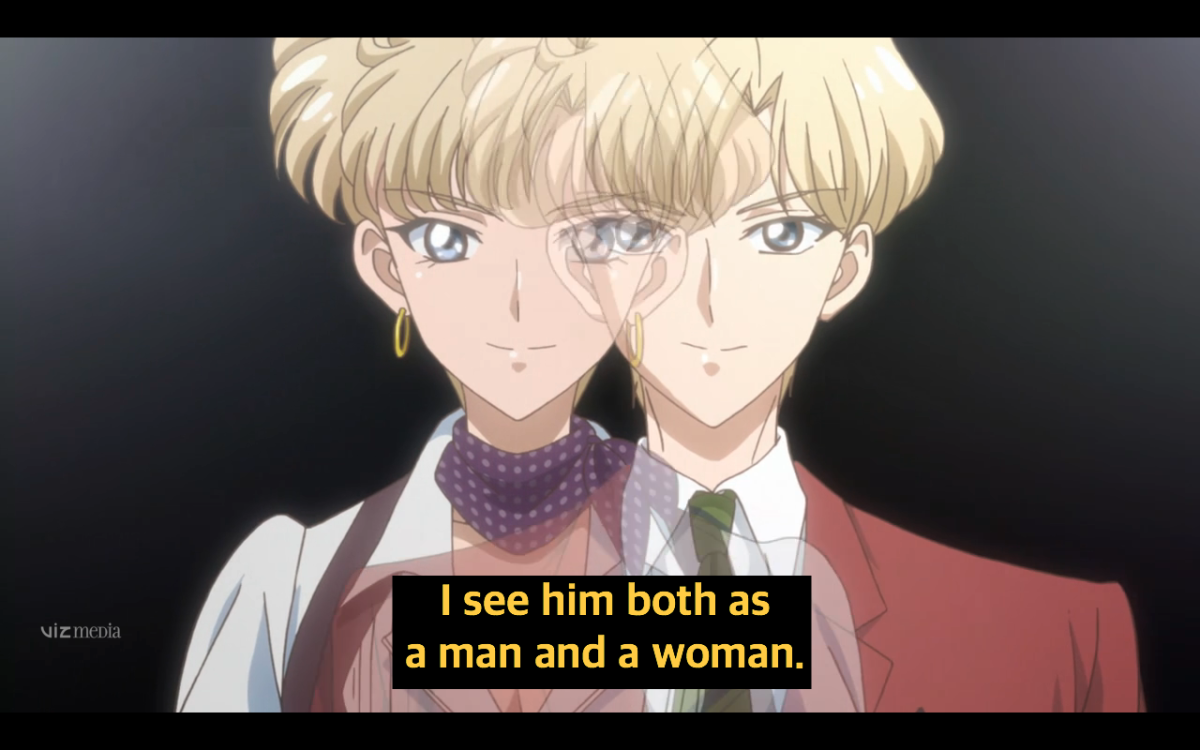 Usagi has a similar reaction but with more confusion, since she sees Haruka as a man and a woman, and everyone else sees her as a threat. But no matter, because Haruka invites everyone to Michiru’s recital. Y…ay?

This Haruka/Usagi and Mamoru/Michiru thing is kinda obnoxious and I hope it doesn’t go on too long. I liked it better when Usagi crushed on everyone—on the guy from the arcade, on Tuxedo Mask, on anyone remotely cute. This feels all grim and serious. The original had a much better sense that Usagi was 14 and prone to daydreams and infatuations. 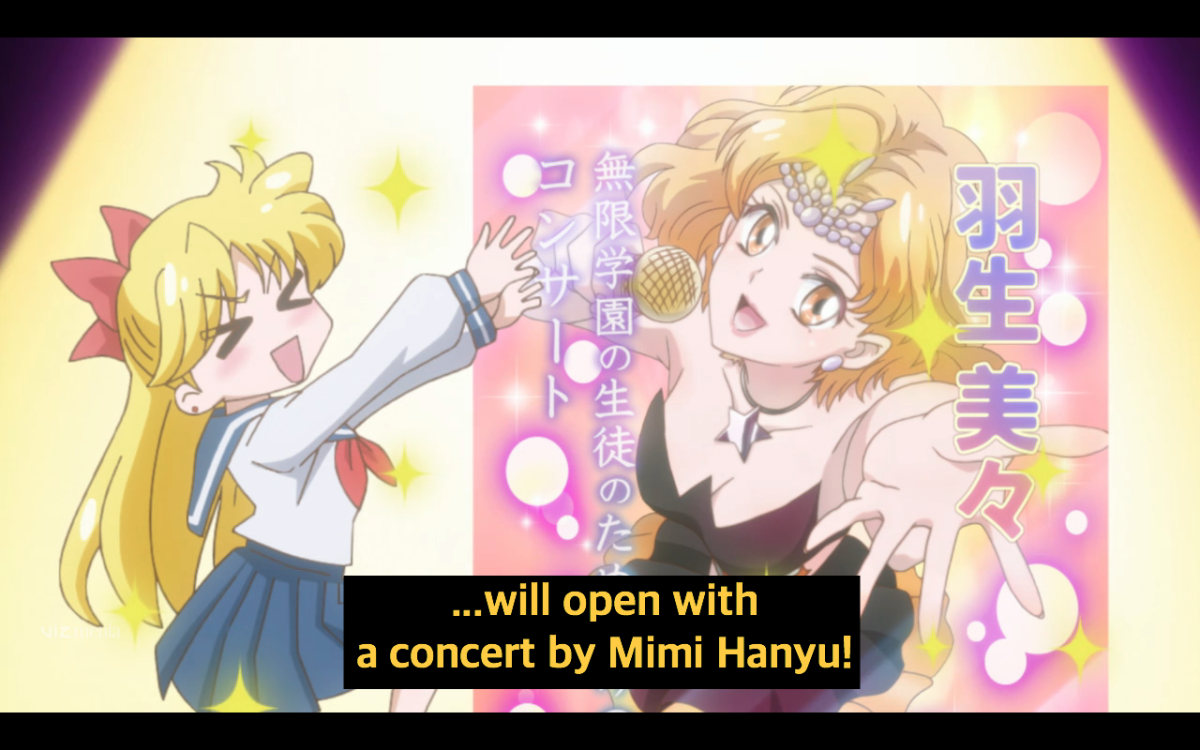 The girls, after deciding that it was weird and ominous that they all had the same talisman dream, decide they want to see Mimi Hanyu (Mimette) at Mugen Hall. But Usagi has tickets to Michiru and gives them out instead.

Mamoru is disappointed that he can’t share his ticket with Usagi – oh god the classic comedy of errors, almost as bad as an O. Henry story. He wasn’t flirting with Michiru, he was getting tickets for Usagi! Usagi wasn’t flirting with Haruka, she was…well, I’m not sure exactly what she was doing. Or what Haruka was doing. Their interactions are charged, but still ambiguous. 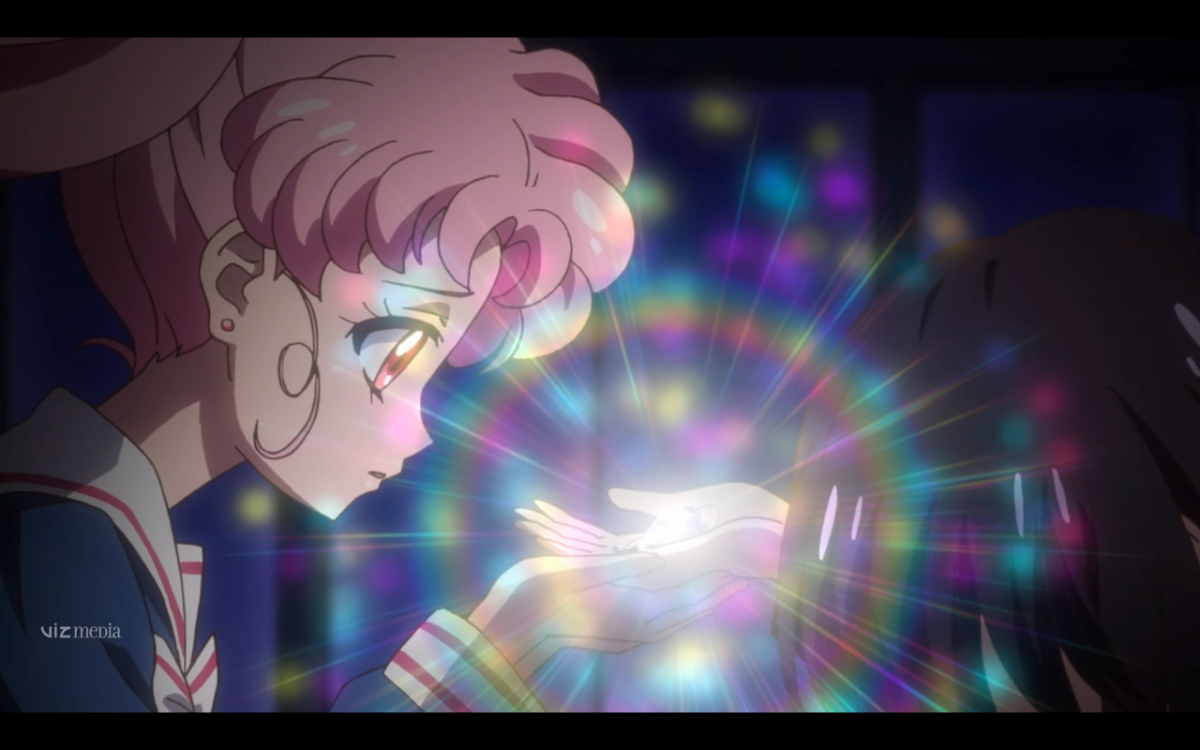 Chibi-Usa treks over to Mugen to see Hotaru and return the handkerchief she used as a bandage. Hotaru invites her in for some tea. She has an attack and asks for the Tairion crystal. She then says something vague about becoming what she’s not. Chibi-Usa shrugs at being urged to go away, and instead gives Hotaru her crystal, the Silver Crystal. The Silver Crystal heals her and makes her feel better, so score one for love and friendship. The girls, united by secrets and empathy, seem to become friends here. Plus, pinky touching! They pinky promise each other to keep secrets! It’s so cute, and given that it’s a pinky thing, it might even be romantic. 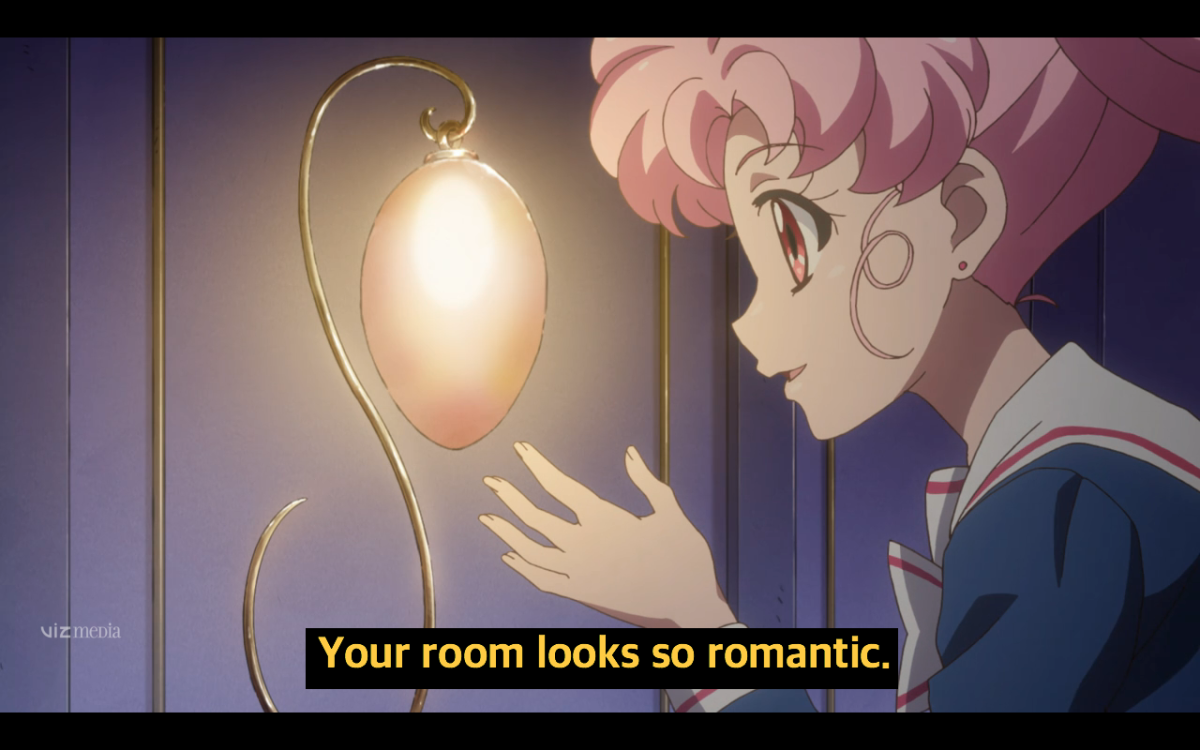 Chibi-Usa heads out a little later, only to be confronted by…a helicopter. Wha—? Of course it’s Haruka (in a dress!) and Michiru, but why exactly are they landing in the middle of the street? This is very illegal, friends! Chibi-Usa don’t care, though. Since she can somehow hear Hotaru over the helicopter, she decides to trust her from the sentence “Usagi maybe doesn’t know us, but we know her very well,” because that’s definitely the kind of thing normal people say, and not serial killer stalker nutjobs. And she gets in the helicopter. What the hell? Does this child have no sense? 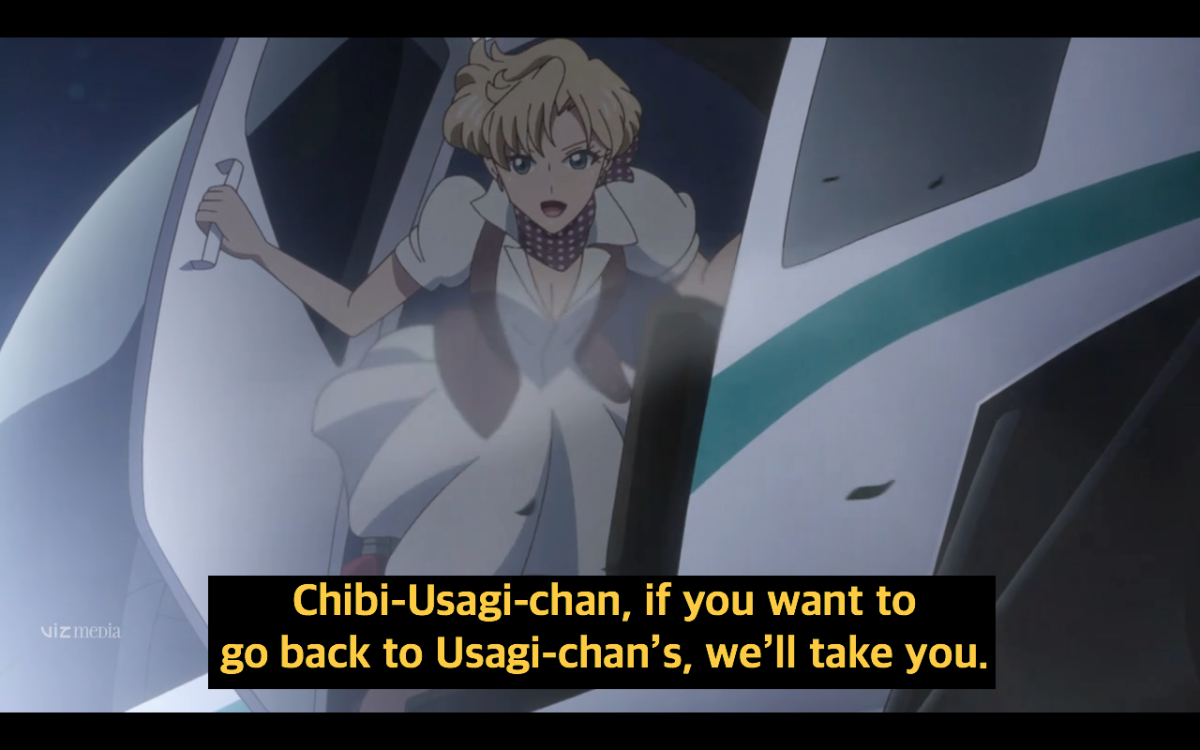 They talk about amulets and talismans, and Michiru says that her mirror is a talisman. Dun dun dunnnn. Chibi-Usa can’t and doesn’t do more than take that statement in, and then skips off to join Mamoru at the concert. Since Mamoru can’t take Usagi as his date, he brings his daughter. Aww. They’re doing a good job with the familial relationship, anyway. Mamoru and Usagi meet at the theater. For boyfriend and girlfriend—and eternal soulmates—they sure don’t communicate much or well. But they all get seated and all is well enough.

Except for Minako, who doesn’t give a fart about a violinist (which, fair) and sneaks off to go see Mimette across the way. (What kind of concert hall schedules a classical concert and what appears to be a wildly popular idol on the same night? Oh, never mind.) Minako has a crescent moon compact from her Sailor V days (SO. AWESOME.), which she uses to transform herself into a male Mugen student. Wow, the gender portrayals are even wilder in Crystal than they are in the original! I love it, and I love so, so much that Venus is getting a chance to shine. 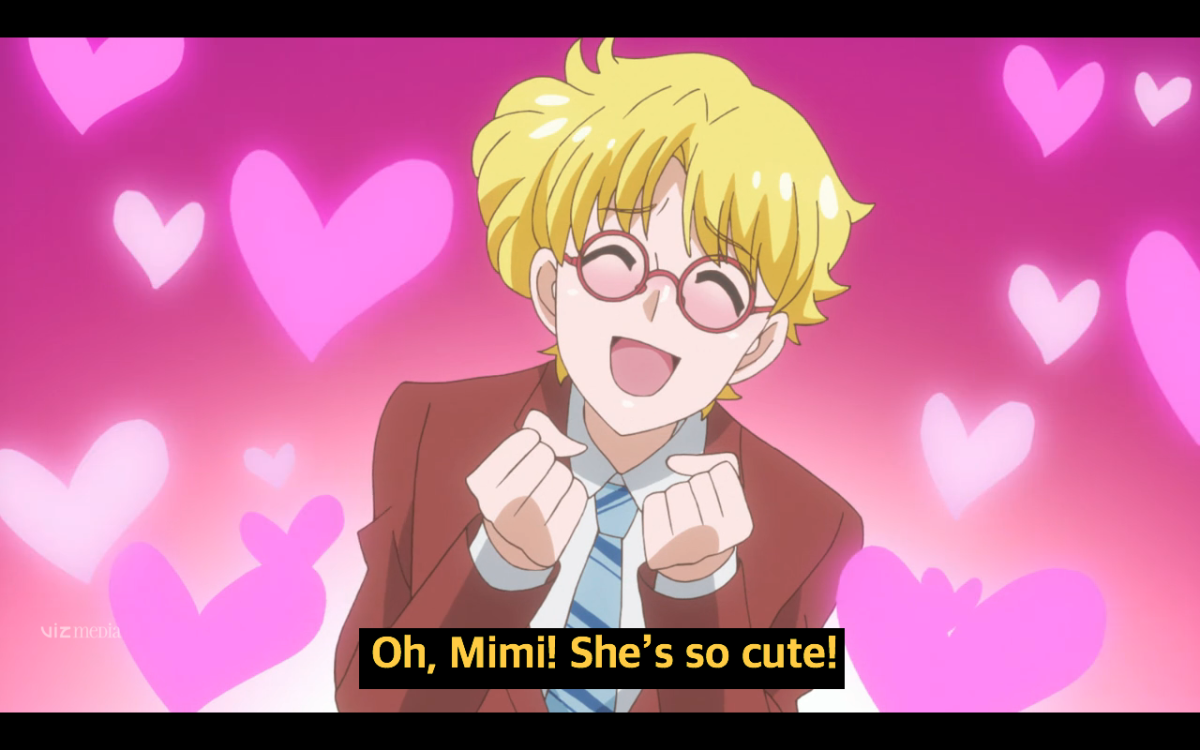 Mimette, however, does not. She was so cute and funny in the original, but now she barely gets five minutes of stage time (pun sort of intended). They’re making the Witches 5 unbearably homogenous, letting costume design stand in for character. She does her enchant-the-students thing, and Venus pops up to stop her after calling in the cavalry. (Hey, they actually use the communicators!) 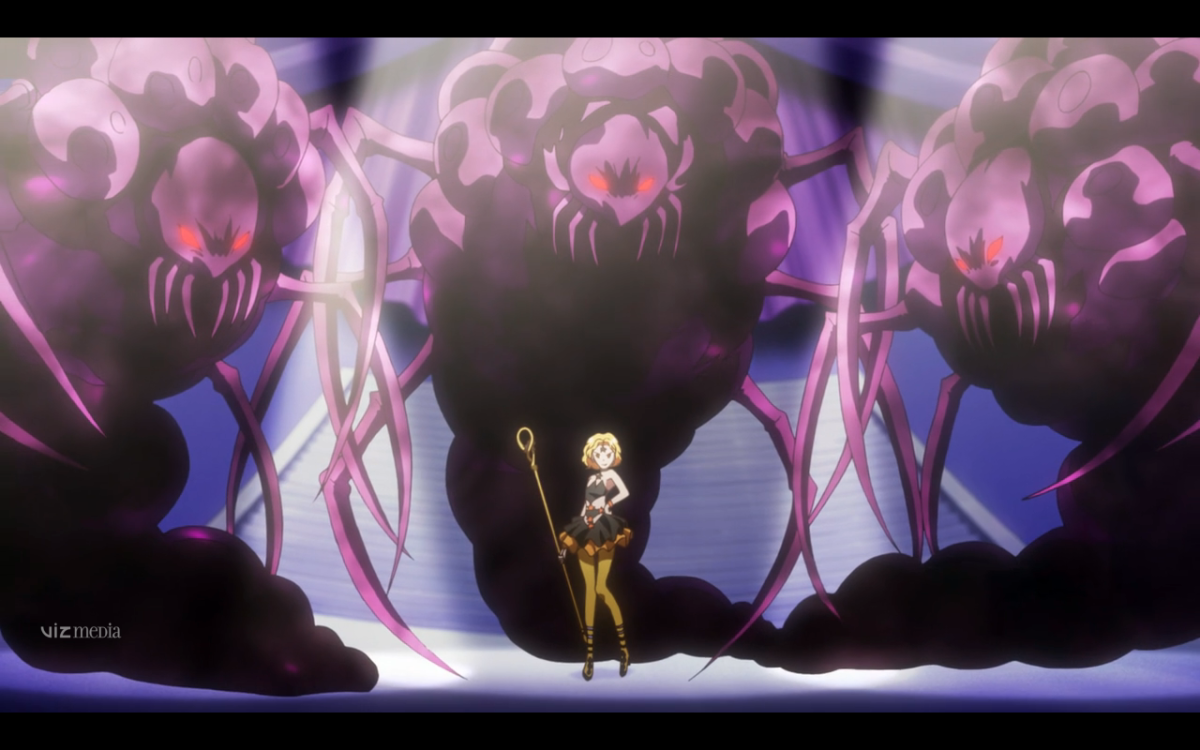 I love they they pit Mimette and Minako against one another as idols, since Minako’s ultimate goal was/is to become an idol when she grows up. I wish we could have had more of that, and more of the fight, and more Mimette…sigh. But she dies in record time, thanks to the Inner Senshi and thanks also to Neptune and Uranus.

When the pair show up (despite…doing a concert around the bend? How did Michiru leave the stage, I wonder?), it’s pretty amazing. The pacing of the fight isn’t perfect, but it’s still dramatic and exciting, so all credit to the writers and animators for this. It’s been a pretty good episode on its own merits, I suppose, so until next time, 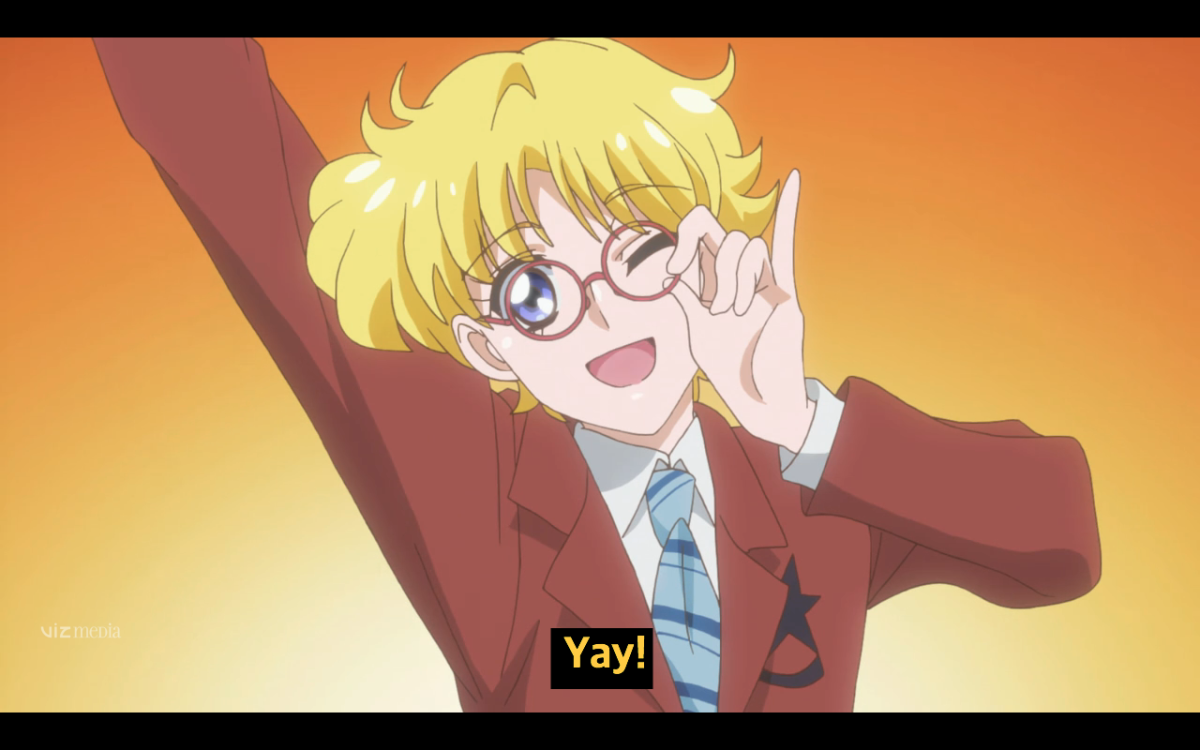