I’ve been a fan of Django Wexler since his first book, Memories of Empire, came out in 2005. He impressed me then with his atypical characters and understated wit, and that has remained a reassuring constant in this cruel, chaotic world. Isoka, our heroine for Ship of Smoke and Steel, is another great leading lady for another great, innovative world. She’s streetwise and suspicious, but unlike most Strong Female Characters, she doesn’t have a heart of gold. Isoka is ruthless, and I like her all the better for it. She kills quickly and without remorse—so much so that even I, a seasoned SFF reader in the post-GoT era, raised an eyebrow. But how else could she be, growing up on the streets and earning every scrap?

Well, she could be like Tori. Sweet, earnest, and altruistic, Tori is Isoka’s younger sister, although one could be forgiven for missing the family resemblance. After all, Isoka works hard to make sure her sister’s hands are clean, her tread is light, and her smile undarkened by slum cruelties. For that, Isoka will kick down any door and kill anyone, friend or foe, who gives off a whiff of suspicion. Because when you’re an adept who draws magic power from the Well of War, it’s not just your money you’re protecting. It’s your freedom. 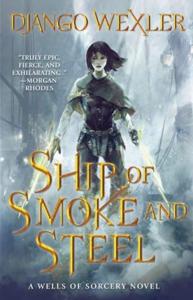 The Empire wants all the adepts it can find, and has no scruples of taking them when it does. Isoka has been lucky so far, hiding out in the slums where the Emperor’s influence is weak, but with notoriety comes attention. And with attention comes the Emperor’s command: go as this year’s sacrifice to the ghost ship Soliton, rise through the ranks, and take over the ship before the year is through. If the Soliton is not in the Emperor’s control at the end of that year, Tori will pay for the failure.

Isoka’s a mid-tier boss in a crime syndicate, not a pirate. And she mostly kills humans, not crabs the size of houses or other aberrations with as many teeth as legs. How is she supposed to survive if the closest she’s been to a boat is the dock? Fortunately or unfortunately, her lack of experience is no detriment, since Soliton is no ordinary ship. There are no planks or masts, no sails—it is, as the title says, a Ship of Smoke and Steel.

Side note: The title gets my usual contempt for being yet another overuse of the “X of Y and Z” formula. Publishers, please stop.

Moving on: I have exactly zero interest in ships. I don’t care about pirates, couldn’t give less of a damn about anybody’s navy, and I don’t want to be able to tell the difference between a jib and a fo’c’sle. I read this book in spite of the fact that it was about a ship, not because of it. And I’m so very glad I did, because it’s not really about the ship. Nobody even says the word “sail” or “mast” except maybe once to remark on how the ship, Soliton, doesn’t have any. It’s not really a ship the way you might expect. It’s a generation ship.

“Generation ships” are huge spacecraft that hold enough people and resources to make a journey that takes multiple generations. Entire generations are born, reproduce, and die not on the home planet or the destination, but on the ship itself. The titular Ship of Smoke and Steel is a generation ship…but it’s actually a ship, too, as in an ocean-going vehicle. It’s ironic, or hilarious, or just plain smart, take your pick. Taking the SF ideal and inserting it into a mostly swords-and-sorcery Fantasy world is brilliant just as a concept, but the execution is pretty close to flawless.

The action is ceaseless and seamless, moving from high-stakes political maneuvering to battles with giant monsters. It was never rushed, but it certainly was some efficient plotting. There was no scene that didn’t move forward at least two threads of the plot, whether solving a mystery or defeating an enemy or evolving the romantic relationships, which is an impressive feat. Wexler knows what he’s about.

Through it all, Isoka really develops and changes as a person. I loved seeing her exploring and pushing her limitations just like she pushed at the boundaries of Soliton society. And as she grew, the world Wexler created grew around her: for all that the plot is centered on a single city and a single ship, there’s a sense of a huge, wild world just waiting to be explored. I’m so glad we’ll get more of this world in future books, since Ship of Smoke and Steel gives me total confidence that Wexler will make it even more exciting and strange than I could imagine.