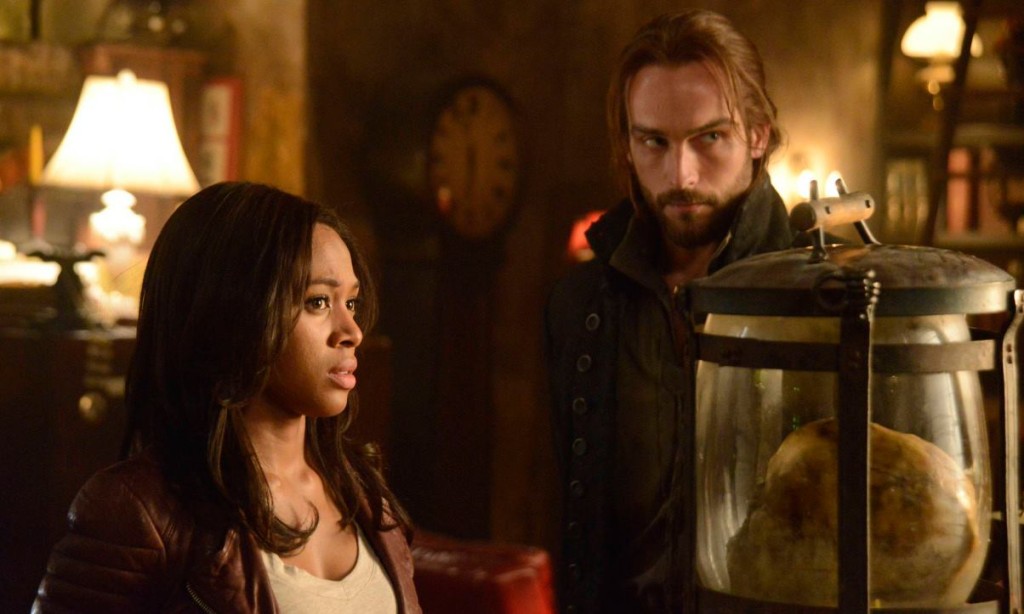 This week’s tale from the town of Sleepy Hollow begins and ends with a desperate horse chase – Paul Revere’s Ride and the less canonical Ichabod Crane’s Hessian Mousetrap of Electromagnetic Doom.

Following a flashback of Paul Revere on his Midnight Ride – that included our favorite Hessian sans assault rifle – Abbie and Ichabod prepare for battle in the Cabin. On the other side of town, Luke is visited by the Not Dead Yet Andy Brooks.

After crashing the second worst dinner party of all time, our Witnesses realize that the Horsemen is once again after his head, which proves indestructible despite sledgehammers, acid and dynamite. Ichabod, who, it turns out, was the soldier tasked with surveilling Revere’s lanterns in Christ Church tower back in 1775, recalls seeing a manuscript on that legendary evening. Originally assuming it contained secrets meant to destroy the Crown, he discovers it instead holds the secrets to conquering evil (so pretty much the same thing).

A cat and mouse game through the sewers beneath Sleepy Hollow, orchestrated by the Dream Team, ends in the dramatic capture – but not killing – of the Horseman.

Continuing to toe that magnificent line between all-out chaos and campy fun (YOU GUYS, THERE WERE PEOPLE LANTERNS. LANTERNS. MADE FROM PEOPLE.), this week the writers showed us what we think we know – Revere and his comrades at arms warning of “The Regulars” – and absurdly subverted it with the predictable, but no less exhilarating presence of the Horseman. 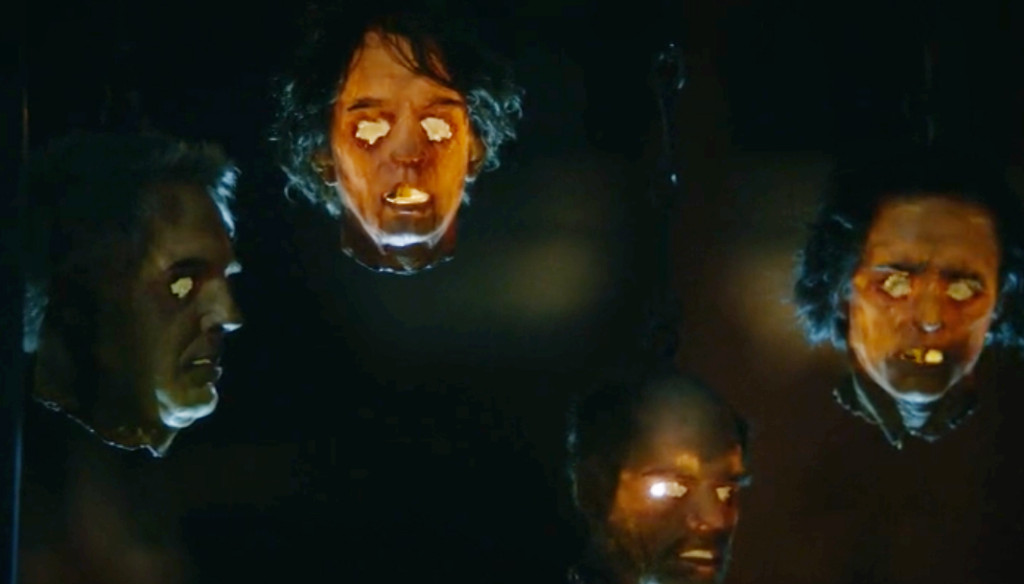 While that’s certainly not something that is new to the worlds of fantasy or sci-fi (see any episode of Doctor Who, Star Trek or Insert Your Favorite Show Here), the idea that we as a people don’t have a true grasp on history is constant, thrilling – and somewhat unsettling. Unsettling in that, though most Americans know Paul’s famous ride and his iconic cry, few of us know of the other riders, few of us consider the apocryphal nature of much of our American folklore turned fact. Or we live in avid denial: I’m looking at you, Thanksgiving.

But where there is take, there is also give, and Ichabod (heartbreakingly) learns the full extent of idol and friend Thomas Jefferson’s relationship with Sally Hemmings, and by extension slavery. Not to mention, that rum beggar totally snagged Icky’s witticisms. 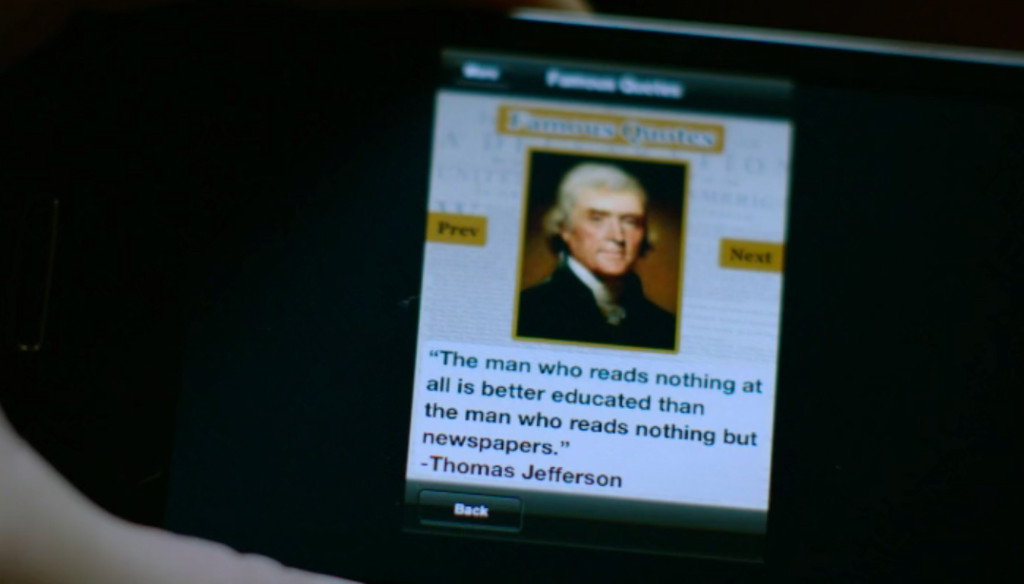 This episode we were also gifted with more Badass Abbie – She installs deadbolts! She tolerates no Masonic chauvinistic crap! She dissolves things in acid! – and Flummoxed Ichabod. Although Crane’s Foe du Jour was undoubtedly Bottled Water, we saw a rather pyrrhic battle with a MacBook, confusion with – but reluctant acceptance of – voice mail, and outright aggression toward the “ninanet” (that’s “internet,” for all you non-eighteenth century readers).

We also saw Irving lose his innocence, so to speak, experiencing his own Bullet Time run-in with Mr. Horseman. Although he has been willing to grant an amazing (i.e. unbelievable) amount of lenience to our Dream Team prior to his own Moment of Truth, I’m interested to see where his loyalties will land with his newfound knowledge. Is he all he seems? His shifty, side eyes tell me otherwise.

I think what delighted me the most, however, was not any – intentional or unintentional – commentary being made about revisionist history, but the giant nerd tool kit the SH writers gave me to explore. More than any other episode before, Midnight Ride made me reach for my metaphoric encyclopedia on several occasions: Was Revere really a dentist? (Yes, probably.) Did he line his lanterns with silver? (Sadly, no.) Wait, so how does a Vigenère Cipher work? (Pretty clever, really.) Why Cicero? (Reasons. Good ones. And Jefferson? Never write your password down on the skull you keep right next to your ancient demonic manuscripts.) 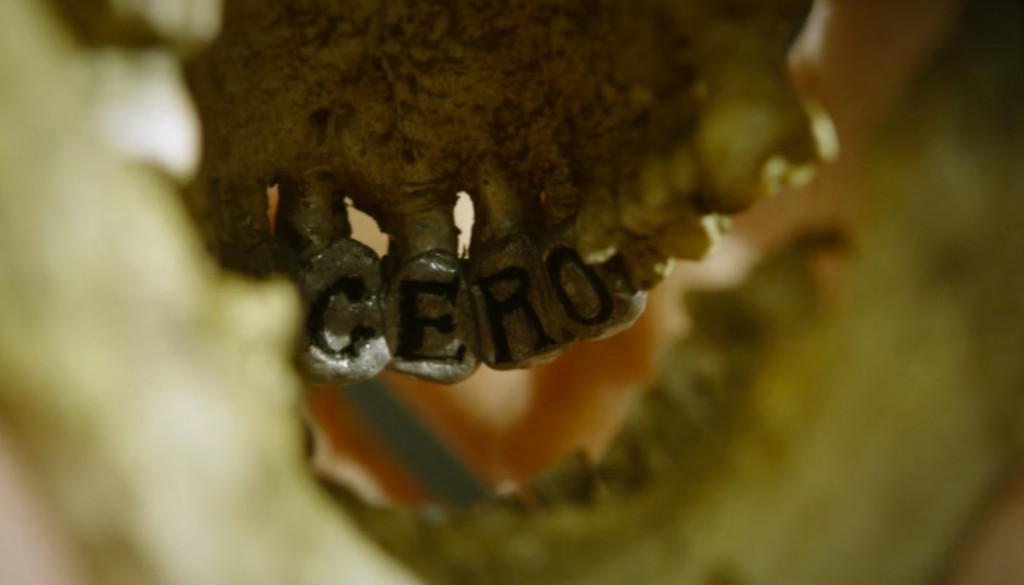 Of course, the real action came shortly after our second montage, when Ichabod, Abbie, and Irving (known henceforth as The OT3) played an impressive Italian Game, using all of A.C. Moore’s Halloween surplus to ensnare Death Himself in an underground tanning bed.

Once my heart rate returned to a normal level after that spectacular cliffhanger – what do they do with the Hessian now that he is tenuously under their control? – my appreciation for the show’s modern day updates to classic folk tale tropes delighted me. Ultraviolet replacing the sun, a chiming phone serving as the telltale baying of creatures at dusk, signaling the coming of night. 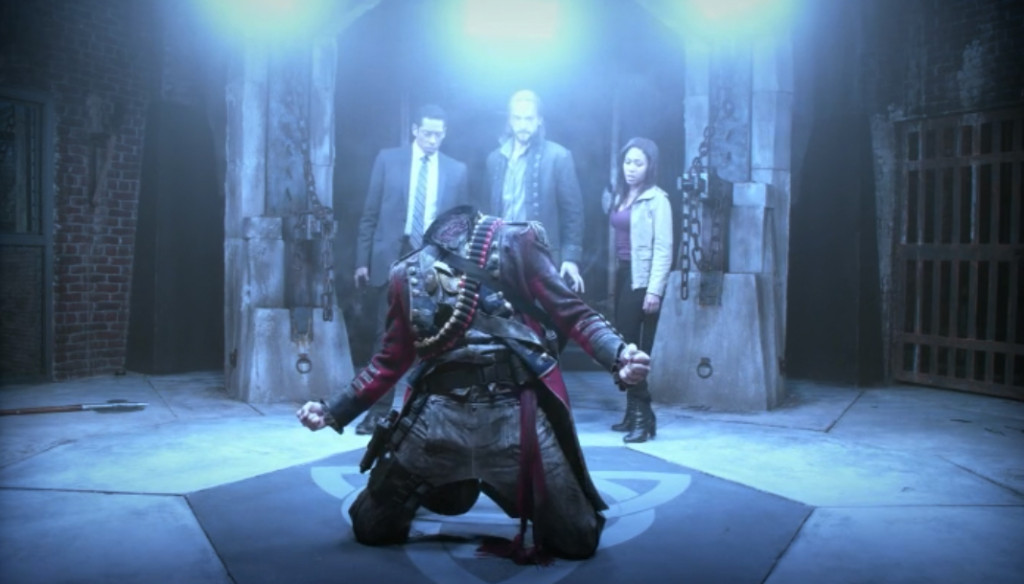 Oh show, I love you so much. You’re like a gothic novel wearing skinny jeans and an ironic t-shirt.

– “All we really get is one another.” I am trying so hard to sail my ships firmly in neutral waters for the purpose of these reviews. But these two make it so damn hard. If Katrina hadn’t loved Ichabod, he never would have met Abbie? *Casually closes #ichabbie Tumblr window*

– I want to know more about Paul Revere’s Lantern System. One if by land, two if by sea, three if by dirigible, four if by evil demon horse, five if by hoverboard?

– What was with that dude dusting for prints? If he’s not an evil witch or a demon, then he’s in dire need of either covert ops lessons or interpersonal competence.

– RIP Andy Brook’s career as a hand model. (Which ended as tragically as his V-neck obsession.)

– It was super inconsiderate of the Horseman to rip out the (conveniently indexed) pages of Undead Hessians for Dummies. NOT TO MENTION THE SAVAGE DEFILED A PORTRAIT OF GENERAL GEORGE WASHINGTON THE GREATEST MAN TO EVER SNEEZE EAGLES AND CRY LIQUID FREEDOM.

– What are our feelings on Mjölnir’s potential to destroy the skull?

– Luke “Stinkeye” Morales: Crazy to the point of joining a coven? Will he add this to his fringe theory scrapbook?