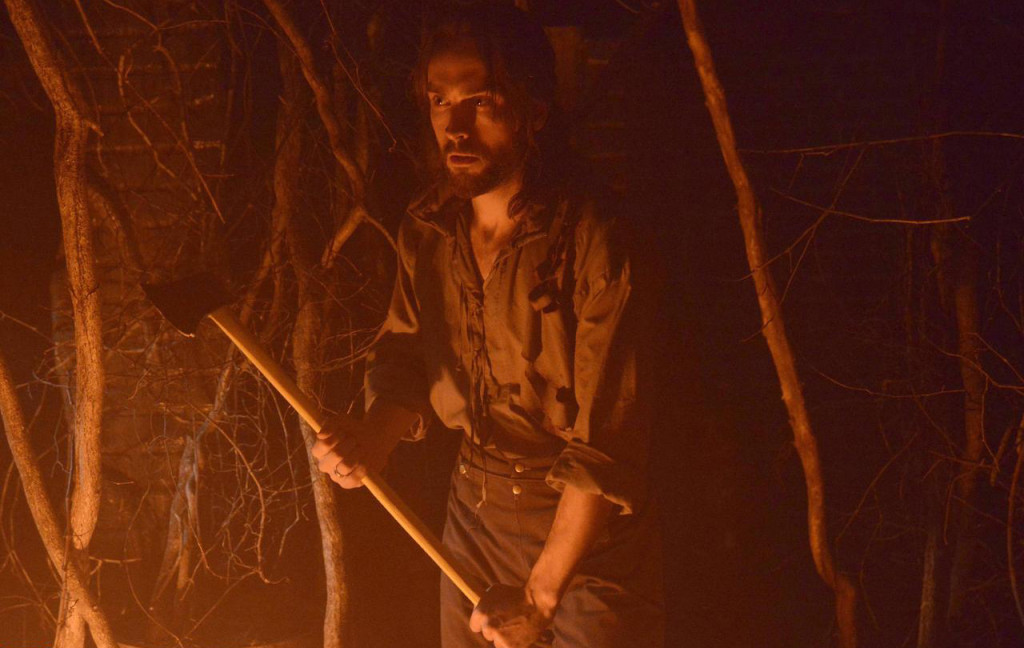 This episode we saw lots of blood ties – both in the figurative, familial sense, and in the literal, demontree with an arterial system sense. So, I guess what the writers are telling us is that the ties that bind us are sometimes actual, scarecrow creature tentacles, ensnaring us – whether we want them to or not.

A rich lady and her architecturally knowledgeable bodyguard enter a creepy house. They do not exit.

At the police station, Thanksgiving talk has everyone grumpy, but it’s no matter – Irving has another case for the Dream Team, and it’s at a place Ichabod knows well: Frederick’s Manor, a former sanctuary for freed slaves and, apparently, The Hippest Place for members of the local witch coven.

Let’s take this one family at a time, shall we? Let’s start with Captain Frank Irving, his daughter, Macy, and his estranged wife, Cynthia. Here we see the now common dynamic of the divorced parents struggling with balancing the life of a single parent with caring for their shared child. Where we expect to see vitriol on the part of one party, we see instead a tentative respect that is only marred by Irving’s apparent inability to make time for his daughter.

Of course, being in on that dramatic irony, we know that Sleepy Hollow is far from sleepy, and Irving’s work is literally life or death (or apocalypse). Nonetheless, we’re shown a more human side of the police captain, and we’re exposed to a commonplace struggle of many parents amidst this crazy landscape of Hessians and supernatural Founding Fathers. Here we see a man, trying to do his best – and finding it might not be enough.

We also get a small glimpse into the continuing rebuilding happening between Jenny and Abbie. The two sisters, it seems, are now living together, and while Jenny isn’t quick to forgive and forget, she’s willing to cook a nice turkey in appreciation of her sister’s generosity.

In the quick interaction between Macy and Jenny, we also learn that, despite Jenny’s initial oath never to forgive Abbie, perhaps she’s reconsidering her stance. Sometimes big sisters aren’t so bad. 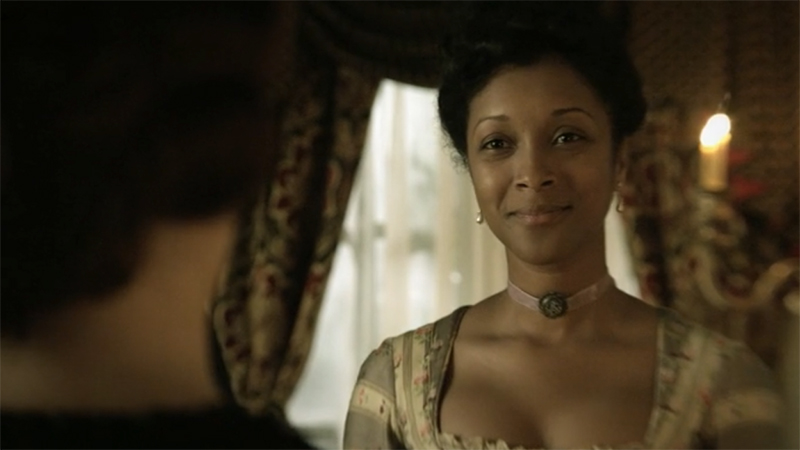 Not to mention, the Mills gained another, less corporeal family member this episode. Grace Dixon, the matron of Frederick’s sanctuary, was both terrifying and helpful. Another twine binding Abbie to Ichabod, cementing their fated connection as Witnesses – which is reflected in the final scene between the two: It may not be “pheasants” and “turkeys,” it may not be a wife or a blood relation, but to “find” a family is to learn that one is not alone, to find community in another being. 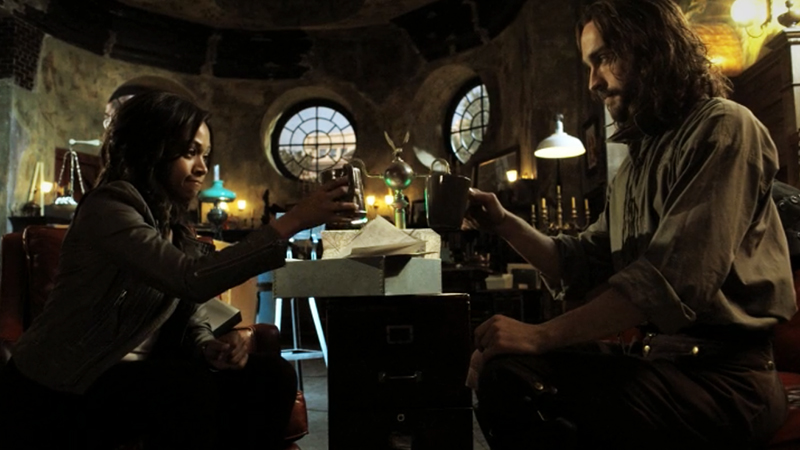 Now to tackle (or hack away violently at) the ties that bind Dear Ichabod and Katrina. As ever, Ichabod remains steadfast in his devotion to his sort-of-late-wife (the rules of purgatory are a bit bendy), while each week it seems that we uncover another truth Katrina has either concealed or outright lied about. And this week it was a doozy: or rather, a baby. 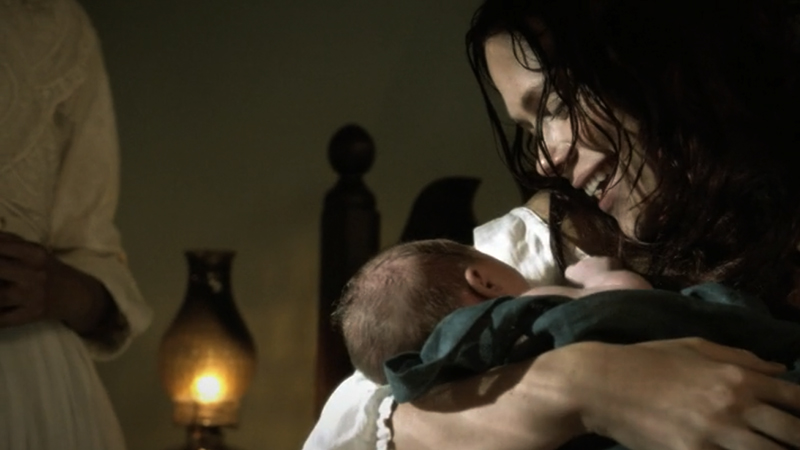 Disregarding Katrina’s past indiscretions, Ichabod continues to find disbelief in revelations about his wife. Though, honestly, Ichy, the evidence is starting to look pretty damning. It was rather easy to brush off the pretenses under which Katrina had Ichabod secure an invitation to Frederick’s Manor in revolutionary days – a small lie to again shield her witchcraft from her husband’s eye – but when a child comes into the picture…well, ask Irving. Children change things.

Even before this (lower case) revelation, Ichabod has felt the absence of family. No pheasants, friends long dead, a world completely foreign. However, a child, a product of his and Katrina’s marriage – and the void it now leaves behind – brings Ichabod’s loss to a level he did not conceive as possible before. One can only hope that, in his anger (you’d think that in one of those Purgatory Spirit Quests Katrina takes him on, she could have blurted out a quick: OH HI. FYI: WE HAD A KID), he’ll start demanding answers from his Ghost Wife.

– This was the first episode of the series directed by a women! Woot!

– Another familial relation: Lena and her ancestors who owned the demonic home. (Why was that place such a hotbed for evil anyway? Hellmouth?) I have a feeling we have not seen the last of Miss Billionaire (A BILLION DOLLARS?!)

– “Treasure from the Amazon” is absolutely what I am calling my next online purchase.

– What was with the birds going all Hitchcock on at that baby? Unintentional or not, I got mega demonchild vibes from Katrina’s offspring. Maybe a Moloch baby?

– At first, I thought that Macy’s disabilities were just an awesome attempt at this show to expand their diversity to a really inclusive cast – but then there was a brief mention from Cynthia of an “incident” in New York that Macy is recovering from. I wonder what that will be…and of course how it will inevitably connect to the End of Days narrative.

– I hope that Grace Dixon comes back, and this time not as a plot device to further Ichabod’s story. It’d be nice to see a bit more of Abbie’s lineage, and how that plays a part in her status as Witness. I still cling to the theory that Abbie and Arthur Bernard are related. Because everyone is related on this show. Pretty sure Ichabod’s son will be a relation to Corbin.

– We got a quick glimpse into Ichabod’s childhood – and it wasn’t super horrible! Now let’s learn more about Abbie, pleasethanks.

– We either need to have Katrina become a more substantial character, or we need to stop using her only as a plot device. It’s becoming harder and harder to see a genuine, affectionate relationship between she and Ichabod. Reaaallly starting to wonder where her motives lie.

– I didn’t mean to, but I totally started to ship Irving/Jenny, aka Mr. and Mrs. BAMF.

– No actual Frederick’s Manor in Sleepy Hollow/Tarrytown, but there is Philipsburg Manor…