Star Trek: The Animated Adventure (or how I learned to stop worrying and love the cartoon)

On my tombstone, it will read: “Here lies a Trekkie, he lived long and prospered.” I live, breath, and bleed Trek; it is deep in my DNA and integral to who I am. I will never forget watching the The Next Generation finale on television when it happened or how wonderful it was when I wore a homemade uniform as a young kid to Las Vegas’ Star Trek the Experience and the cast of the ride treated me like a member of the Enterprise crew. 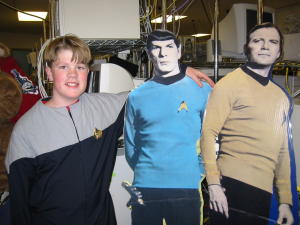 But despite Trek being one of the great loves of my life, I had never seen an episode of Star Trek the Animated Series. I never even knew that much about it and, after reading a bit about people’s relationship with the strange cartoon, our lost Trek, that’s not that unusual.

Star Trek: The Animated Series has some issues..

It looks funny. Although I couldn’t remember having watched it, many Trekkies and I have a strong mental image of this show. It came out during a rather dark time in cartooning and is infamously and intensely cheap. Without ever being told and maybe through osmosis of the collective unconsciousness of Trek, I somehow knew that this show struggled with production. You need look no further than the opening credits to see that the animation can be rushed, cheap, and ridiculous. The reusing of assets was among its more egregious issues: you’ll sometimes see someone on the bridge who is actually on the away mission, which obviously also created continuity issues. 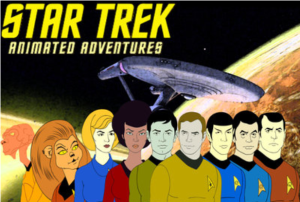 It lived and languished outside of canon. Next Gen started defining who it was by more or less denouncing the animated series. Gene Roddenberry was the first to admit that it was not really canon, and went to great lengths to make sure that nobody believed the life support belts or proud lioness bridge officers had a home in Star Trek. In our little cartoon Trek, the Enterprise goes to the heart of the galaxy and beyond the edge of the galaxy, none of which makes sense in the new world of Star Trek, where the Borg exists hundreds of years away from Earth at maximum warp.

It was really hard find. While it had this reputation of being cheap and not really a part of Trek, it was also a pain to find if you wanted to watch it. You would have been very hard pressed to find it on television and you’d never find it placed next to all our more well-known Treks on the shelf. You have to go out of your way and spend money to get it.

So despite having voraciously consumed almost every piece of Star Trek Television from ‘The Man Trap’ to ‘These Are the Voyages…’, the cartoon Trek remained a final frontier to me and so many Trekkies. Which is a real shame because it’s awesome.

…but it also has some real genius.

It lacks any limitation. Gene Roddenberry had two great skills. He was a beautifully conceptual writer with aspirations, who could see the future not as the logical extension of the present or of history but as it could be. But his second greatest, and sometimes under-appreciated skill, was making miracles happen on a dime. Roddenberry sold Stark Trek to the dreams as a grand vision of a more perfect humanity, while at the same time selling Star Trek to his network as being a versatile, low budget production that could reuse sets and have the show’s miracle tech paper over the cracks of a perpetually starved-for-cash show.

The animated show is cheaply done as well–hence the reused assets creating problems–but it was the only time the writers were totally free to unleash their full imaginations on the screen. Instead of aliens being slightly tan humans, there is a proud Lioness who has a tail and never wears shoes on the bridge. A stand out baddie for me is a nefarious shape-changing horror in S1E6: The Survivor. If this were done as live-action, this character’s true form would have been a dude in a smock; in the magic world of Star Trek animation, it’s a Lovecraftian tentacled horror, which is so much fun! 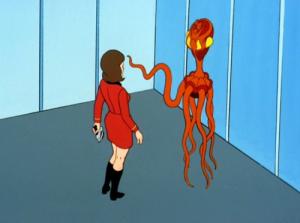 The original cast gives a compelling performance. I was so absorbed in the action when Spock plays a very cerebral high stakes game of chess with a Klingon battlecruiser in the Tribble sequel. Kirk, Spock, and Bones read a lot differently in this show compared to live action. Kirk is less melodramatic, and more deliberate and tactical. With the exception of Chekhov, the entire original cast is back and better than ever. Plus, Walter Koenig himself is still a part of the team as a writer.

M’Ress. M’ress is everything missing from your life that you didn’t know you needed. She is played by Majel Barrett herself and is the show really embracing its cartoony side. Plus, she has a tail and never wears shoes, which like almost everything about this show, is just a ton of fun. 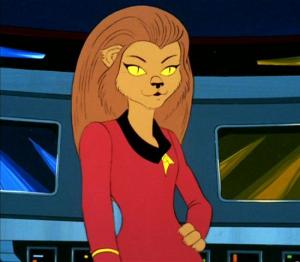 It’s kind of sort of canon. Again. After Trek moved away from this cartoon, slowly over the decade’s great Star Trek writers have come back to the well of the rich lore of this cartoon. The city of Spock’s childhood is not only canon again but is often depicted in remastering of live action episodes that take place on Vulcan. And speaking of Spock, his origin story will really feel organic to anyone who liked J.J. Abrams’ Star Trek – he borrowed heavily from this cartoon. Even the Lion people are canon again—but still no life support belts (fingers crossed). But that deeply strained and really not new-viewer friendly idea of canon is a bit beyond the point. A part of the joy of this show is that it’s so different than and free from the long chronology and legacy of Star Trek but is so special in a lot of the same way Trek is special. This cartoon is making a real come back for the people who make and love Star Trek but only because it’s a ton of fun and stands up so well on its own legs.

It really is a Star Trek. One of the most important things people are worried about with any new Trek is if it has the spirit of Star Trek. It’s hard to define, but this show has the soul of Trek in spades. I watch it with my girlfriend’s 8-year-old and, at one point in the “Our Planet is Missing” episode, he looked at me and said: “Wow. They really try hard to make sure they are doing the right thing.” That’s significant. It was very clear to him that there was a lot the crew could have done and it was also clear to him that they were trying very hard to get it right with what they should do. If you make a quicker, more action packed Trek like this show ( or like the new movies…), one of the first things to go is the philosophical, idealized future where people set a tremendous examples for people of all ages to be the best they can be.

But this show doesn’t do it like that. It’s capital S high-concept Sci Fi,  with an extra dose of fun. This is a 30-minute show, so it’s leaner and meaner. Phasers get fired a lot faster and much more often. But every ounce of that smaller show lives and breathes Star Trek. If you’re new to Trek, it’s a great place to start, and if you’ve somehow missed it like me, then it is our final frontier.

Set phasers to fun everyone. It’s now on Netflix so it’s no longer a challenge to find it and it is worth your time. 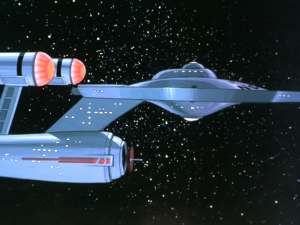