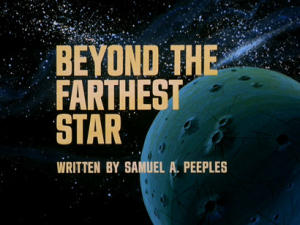 Star Trek The Animated Adventure starts whether you’re ready for it or not and it begins by hurtling you towards a mysterious Dark Star. Seconds after the opening credits, the rich sounds of the Enterprise totally engulf you: computers hum and beep along, until a loud klaxon of Red Alert signals immediate danger. The proximity beep from Mr. Sulu’s navigational computer gets louder and louder as we crash towards this terrible dark star.

We are in medias res on a bold new adventure. We are surrounded by danger and we are risking our lives just to be where no one has gone before. Bring it on.

Sulu struggles with the controls. Stress is ebbing in Kirk’s voice. Spock’s voice is getting faster and faster as he is describes readings he has never seen before. Finally, we are able to achieve orbit, but impossibly…we are not alone. 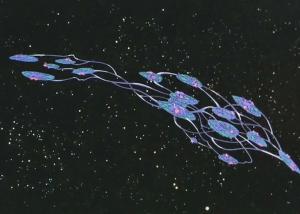 There is something here with us. Spock reads all sorts of inexplicable readings on this ancient, strange, long dead thing – something that has been trapped in this gravity well before life even began on Earth. I keep tricking myself into thinking I’ve found emotion or excitement in his voice but it is just an implacable reading of what his eyes and instruments see. Whether or not he is excited about how the new and unknown, I sure am.

Kirk flies the ship to a safe orbit. Spock is seeing things nobody has ever seen before. Bones is thinking about how the Hell are they going to get out of the grasp of this nega star, considering how hard it was to achieve a stable orbit.

This introduction is a powerful statement for what the cartoon is: it’s Star Trek abridged. More action but very much Star Trek. We are going in balls out, guns blazing, and with all the drive of an old world explorer risking life and ship for our mission which is science and the betterment of all. We have a strong Id in McCoy, Ego in Kirk, and Superego in Spock – all pushing and pulling our adventurers in different directions.

Let me just pause here to say that the music and sound so far are masterful. For how hokey and silly this show and episode looks, it sounds tremendous.

But we didn’t nearly lose our ship and our lives to just sit here and listen to the ship! We are going to go where no one has gone before. Spock, Kirk, McCoy, and Bones board the alien ship that has no heat, no life, and no light. 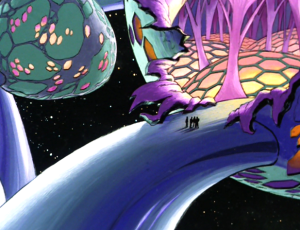 We’re not on a low budget reused sci-fi lot anymore. We’re in space, motherfucker! This alien ship, in particular, is a perfect choice for their first alien ship encounter. It’s pretty and pretty wacky. It doesn’t look at all like it was manned by near humans. It could never have been depicted like this except in animation, and it’s set pieces like these that are a real strength of this show.
Also life support belts! A very controversial choice which I happen to like, we can now have our heros freely move around in space like conditions shielded by life support belts that have limited battery life. It’s basically the shield from Halo. It can absorb energy discharge, even repel physical things like a room collapsing on you whilst helping you maintain livable conditions. Trek fans either like this choice or hate this choice but one thing is clear, we are in a new show that is not as limited as the old one.

“Jim! The door!” Bones our Id is the first to see danger. Something is ripping through the ship and trying to burst through the door. It’s clear it’s something with great energy. There is also this strange ambient noise. Spock, our Superego investigates the noise while Kirk stands between them.

After some real tension, Spock interprets the noise. Its an ancient warning telling people to stay away: the dark star has pulled them in and because of the horrible malevolent life form, they have no choice but to destroy their ship. This message is from 300 million years ago.

Time’s up. The door and much of the alien ship is exploding. Kirk beams the crew back, and holy shit balls, this guy’s mustache saves the day! 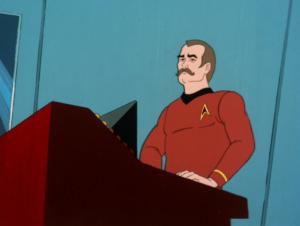 “Captain… something has beamed aboard with you,” Mr. Mustache says in horror while looking at this green energy beam with them.

Now, little ‘ol Sam here, whose favorite horror movie is The Thing, is enraptured by this.

The little green energy alien does an evil laugh and escapes into the computers because of course it does. Didn’t you see the sign on the wall? This is Star Trek and that is what happens here. 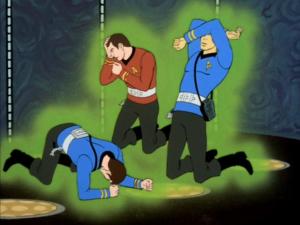 Also, people pound the ground in agony for some reason.

Trying to heed the warnings of the dead alien ship, Kirk orders Scotty to arm the self destruct. Suddenly the alien starts to try to shut down the life support! No time for self destruct, Scotty, you’ve gotta get us some air! 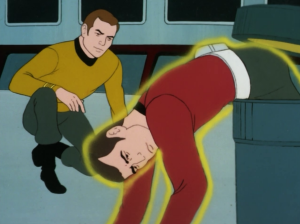 In fact, Scotty would be mega dead if it weren’t for his handy dandy life support belts. I don’t get the haterade – I’m all about these belts.

No time to waste back on the bridge, as the crew wonders why the alien is with them and what it wants. They conclude the dead star’s gravity must have it trapped here and it must be waiting for a starship with which to escape.

What happens next is that this alien shouts: “Obey me!” a lot while him and Kirk have some sexually charged semi-BDSM play as he endures the punishment from its obedience beam. If you’re new to Star Trek, well, welcome. This is not exactly unusual here. 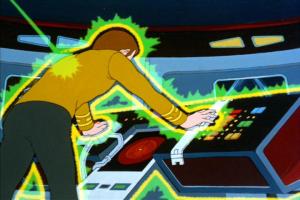 The answer of how to get out of here is simple. Slingshot off the star’s gravity. But now, they have to escape without this alien. Spock learns that this alien can reproduce itself through mitosis and symbiotically sync with and control any computer. If it leaves here on the Enterprise, it will consume everything.

Did I mention I love the movie The Thing?

Kirk’s solution is a high stakes game of poker and/or chicken, depending on your opinion of Kirk. He pushes the ship closer and closer to the star until finally pulling out at the last second and the Enterprise warps away!

This episode is action packed. Really quick and very well done. Its sound design and music are really incredible. Its lore and ambition are just delicious and it’s such a fun episode to show what you can do in an animated show that you couldn’t do in live action. No matter what your relationship with trek, you must watch this episode! Obey me!