Something very special happened to me while watching this episode of Star Trek: The Animated Series. I was watching with my stepson and, while they were contemplating their dilemma in this episode, he turned to me and said: “wow they try VERY hard to do the right thing”. It was incredibly touching. Star Trek has always been that to me: a shining beacon of what trying very hard to do the right thing looks like. The fact that it shined through as one of the main take away points of watching this show is a real testament to this iteration of Star Trek. Yes it’s the HOKIEST cartoon ever but the essence of Trek is here in spades.

Our action begins with a captain’s log. Turns out something is happening and…wait for it…the Enterprise is the ONLY ship in range?!? Can you believe that? What are the odds? Well, turns out pretty damn good so we better get used to this. The ‘we’re the only ship around’ thing happens so much, I’m beginning to suspect it’s done on purpose as a running Star Trek writer’s room joke. 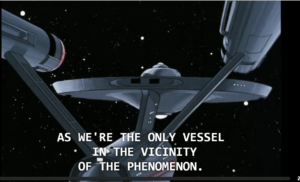 Turns out we are in frontier space; the furthest from Earth that humans dare live near a symbolically and humanitarian important colony which is being plagued by a cloud.

You’ve come with me on this journey this far so it’s time I level with you…there are a few things that Star Trek inexplicably loves to do and one of them is throw villainous clouds at us. Yes, I know you’re picturing the least threatening collection of atoms possible in your mental image of a cloud and…you’re not wrong. But it’s just a thing. Villainous clouds, which do all sorts of cloud villainy things including, in this case, munching on some sweet sweet colonists. 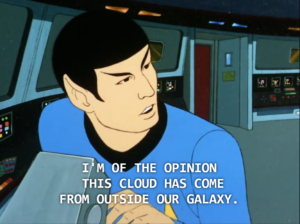 Spock immediately sees a long game where he believes that if the cloud is eating planets like an amoeba eats food, there is no reason to believe these things can’t and won’t continue to eat indiscriminately. What a world!

We also are treated to one of my guilty nerdy Trek pleasures which is planetary politics and municipal governments. Wait. Please stay. I know I’ve told you this is a cheesy cartoon, that our only villain is a cloud, and that I am interested in the municipal government of this colony but there is beauty to be found in all this mess. Trust in me.

Oh and while we were talking the cloud straight up ate the Enterprise. Out of nowhere right? Surprised Kirk too. 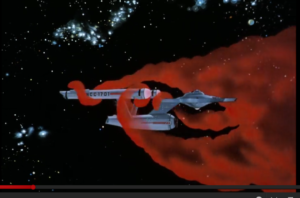 Kirk ain’t gonna be no cloud food so he hits the guns. The Enterprise unloads its phasers on the cloud but it absorbs the energy. But throughout this excitement, Spock really knows what the people want and that’s more delicious cloud science. Turns out, this one sort of functions like a cell so the enterprise is actually suspended in this plasma liquid. Neat! Also, it is being digested with anti-matter that the cloud uses to break things down. Oh and apparently the Enterprise has this pulse super weapon thingy. Who knew? 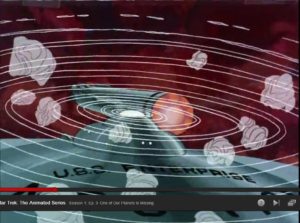 Spock takes us full Magic School Bus and shares his theory that this is cloud is a living thing. The only thing keeping the Enterprise from being lunch is its quickly draining shields.

We have 3 hours and 20 minutes until the Cloud reaches the colony. The colony governor chooses to use that time to evacuate the children on the few ships the colony has. 😢

Sulu maps out the cloud and did I mention we were going full Magic School Bus? Because with this map, we have reached peak Magic Bus. 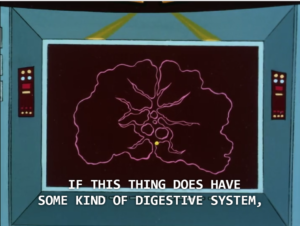 Kirk’s honest to Q plan is to give the cloud a tummy ache, which I kind of love. Kirk slams the ship right into the heart of the cloud, its shields pushing everything aside in what must be an uncomfortable process. McCoy decides to teach us about the human stomach.

Turns out, it’s a lot of work tromping through a giant tummy. The Enterprise is pooped and is dangerously low on anti-matter. Fortunately, this cloud uses anti-matter like digestive enzymes! So the Enterprise takes and eats some cloud guts to use as its new power source and is now part cloud.

Honestly you just had to be there. Oh and the set design for engineering is FANTASTIC in this episode. 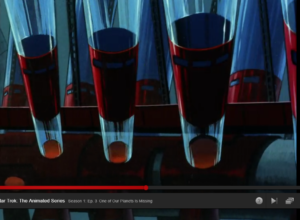 While the Enterprise was eating cloud to feel better (!), Spock has found out that the cloud has a brain. I suppose we should now call it the Cloud. Kirk realizes that if it has a brain, it can be killed. And a moral dilemma ensues.

The Enterprise can now kill this cloud but it is becoming more and more obvious that this is a living thing. It is clear that killing the cloud will mean the destruction of the Enterprise.

As a last ditch effort, Spock decides to try to reach out with his Vulcan telepathic powers to the cloud. 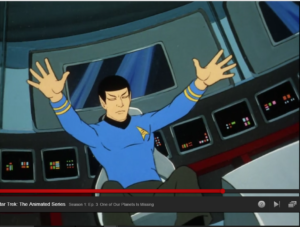 Cloud:  “Oh. There are other things besides me that think and live and have the expectation of the dignity of life that I have experienced. It never occurred to me that my actions would inflict harm on another and the universe seems infinitely more alive and diverse with this paradigm altering knowledge. You know what?! I think with this new knowledge I am and will forever now be a vegetarian.”

That’s basically how it went down. Hey guess what reader? You are IN IT NOW. You just heard a Star Trek tale where the only bad guy was a cloud and where just briefly talking to a baddie and saying: “yo how about like no tho” fixed it all. You may be thinking this show sounds cheesy as heck (and you aren’t wrong about that) but trust me, it’s still a ton of fun. And having your kid look at you and say: “They try really hard to do the right thing in Star Trek” is something powerful to experience. Star Trek is about being the best that you can be and sometimes when there are killer clouds being the best, it means tickling its tummy and telling the cloud that the universe isn’t such a bad place after all.

If you are interested in experiencing more Trek with me I have begun a Star Trek Fate RP podcast. We are called Highly Illogical. Check us out sometime! Thanks for reading. Live long and prosper.