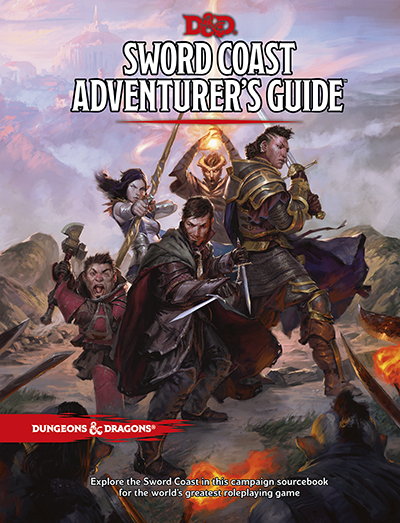 Does your skin tingle when you hear the words “Neverwinter” or “Purple Dragon Knight”? Well, congratulations – Wizards of the Coast is launching the Sword Coast Adventurer’s Guide on November third! Explore your favorite locations located all along the Sword Coast with your D&D 5e party. Now, it isn’t just the new maps or the locations that have been scared by the Spellplague, no, you also get more character choices!

More subclass options are being released with the Sword Coast Adventurer’s Guide including, but hopefully not limited to, the Purple Dragon Knight and the Swashbuckler. Now, the Swashbuckler was already “released” in the Unearthed Arcana: Waterborne Adventures, but maybe this version is better? And, if Swashbuckler (I have almost typed Squashbuckler about every time because you know I am all about that squash life) then maybe, just maybe, an enhanced version of everyone’s favorite Storm Sorcerer will also be included. I don’t even know if anything additional will be added that wasn’t included with the Unearthed Arcana, and I doubly don’t know that the Mariner and the Storm Sorcerer will be included alongside the Swashbuckler but I am selfishly hoping for more lightning based magics.

Stay tuned for more information about Sword Coast Adventurer’s Guide and all the goodies it has in store, all of which are compatible with the Rage of the Demons storyline, closer to its November third release!