“‘We measure the freedom of human beings by their ability to change with their environment. The only truly alien influence is the dead grasping fingers of our own past.'” (296)

Charlie Jane Anders wrote the cypher for her own The City in the Middle of the Night, an inventive work of science fiction interested in the collective and personal traumas that keep trying to drag the future back into the past. It’s a useful thing to remember when trying to parse this complex, fascinating tale: the trauma and the division (of the planet, of humanity) is not the message. Nor is healing, not exactly. It’s more about moving forward, ready or not, for a future that will arrive regardless. 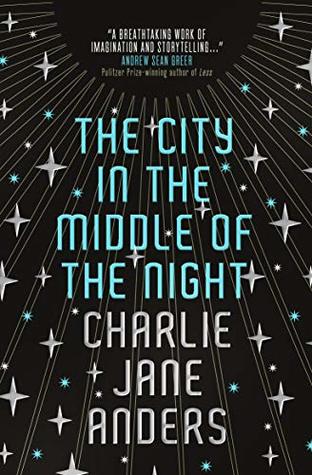 Writ large, humans have escaped the most obvious part of their past—the planet that produced them. Having wrecked Earth beyond repair, the wealthiest and most capable governments and cultures banded together to create a generation ship that would take them to January. But the planet does not orbit on its axis or around its star, leaving one half a furnace and the other half an icy wasteland. The sliver of “dusk” is the only inhabitable area, barely hospitable to human life, and the grand toll of space travel and terraforming left humanity poorly equipped to cope with even that strip of land.

We are introduced as much to methods of coping as we are to two characters, Mouth and Sophie. Mouth is a smuggler who lives purposely away from civilization as much as possible, and Sophie is a student who has never known anything but Xiosphant. According to Mouth, “Everyone in Xiosphant was weirdly polite, just as long as you pretended all their made-up stuff was real.” (71) Xiosphant deals with the perpetual twilight by imposing obsessively strict regulations for everything from human relationships to sleep. All of the requirements are aimed at erasing the past (and present) differences by reducing everyone to automata. The painstaking regulation only highlights the absurdity of the endeavor: time—like taxonomy, like sexuality, like gender—is mostly a made-up imposition of lots of little rules and expectations, some of it useful and most of it vestigial. It can’t destroy the past, only suppress it.

The accretion of culture, locked into place by the illusion of permanence and logic, is just as extreme in the other major city on January, Argelo. A city-state founded in conscious opposition to Xiosphant, Argelo is a chaotic place where time is most often defined as “when I feel like it.” Argelo is run by nine vying mafia families who may embrace personal freedoms, but who are just as exploitative. When Sophie and Mouth eventually experience Argelo, they find people who may know of their cultural heritages from back on earth, but who are also engrossed in the inter-familial grudges and unable to work toward a meaningful future. The “dead fingers” of the past grasp just as tightly.

Mouth wants to be left alone with her past. Sophie wants to escape her trauma. Neither city will let them leave the past behind, though. Living outside the cities is equally impossible not only because of the temperatures but also because of the wildlife.

The “translator’s note” at the beginning of the novel notes that the animals names are merely an attempt to provide a familiar name to an essentially alien species. Unfortunately, the translator is far removed from both Earth and the spoken English language, and the chosen designations are profoundly wrong. “Horseflies” may fly, but they devour “chunks” out of people’s skin (130), and may not even be insects. “Pheasants” are roasted for food on the street corners, but mentions of their scales and “webs between all of its legs” (164) give an uncomfortable jolt to anyone who might have been hungry for wings. This frisson between the familiar name and the unfamiliar description creates a subtle sense of the uncanny, one that builds with every offhand mention of the wildlife.

The most important instance of this biological-linguistic mismatch are the “crocodiles,” insectile entities who have pincers and tentacles instead of scales and jaws, and who are fully sentient beings. The “crocodiles” have a civilization far removed from that of the humans, but can easily communicate via a kind of empathic telepathy, if only humans would allow them to get close. Instead, humans hunt them for food and consider them a delicacy.

Sophie only realizes the truth when a “crocodile” rescues her from certain death outside the safety of Xiosphant. She gradually forms a friendship with the species, whom she decides to call the Gelet, after a word in her own language that means “mender.” The Gelet want to create all kinds of wonderful inventions, and also want to repair the planet itself, which has been undergoing dangerous changes. They live in a peaceful, collaborative society undergirded by empathy, since their means of communication requires being open to feelings from all others.

But Sophie seems to be the only one willing to accept the Gelet as equals. Others still want to kill them, or use them for their superior strength and endurance. Humans, who really only live on the surface, can’t seem to think beyond day and night, past and future. They inhabit a tiny slice of compromise—the dusk, and the present—and think that it’s all there is, but the Gelet are there to prove them wrong. They live—metaphorically and literally—beneath the surface, their elaborate burrows mingling heat and cold, and their empathic abilities fusing memory and imagination to defy time itself.

The Gelet are paragons of forbearance and kindness, which is both lovely and a little too ideal at times. They aren’t perfect, but mentions of their mistakes or imperfections come very late in the story, long after they’ve been established as saviors. As individuals they are much more interesting, giving nuance to a society that might otherwise seem not too alien, but too far out of reach. Sophie’s relationships with individual Gelet make for magnificently tender scenes, although that’s as much to do with Anders’ skill with character work as it is particular to the Gelet.

Anders is a dab hand at depicting all the little wounds and wonders of intimacy. I particularly liked Mouth’s relationship with Alyssa. These two gruff smugglers may bicker and snipe, but they also bolster one another as much as their issues allow. Sometimes, even more than their issues allow. Watching Mouth fight her trauma-induced anger and silence to try to acknowledge Alyssa’s misguided attempt to help was a beautiful, understated scene that really injected the story with the hope that humans could transcend the past.

The City in the Middle of the Night is out today from Tor.