Would you survive a zombie apocalypse? If it were to happen now, as you read this article, what supplies would you have on hand? Are there people around with whom you would cooperate? These questions and more are the focus of Fantasy Flight Games’ role-playing game The End of the World Zombie Apocalypse. This tabletop game was released December 2014 as the first of their The End of the World RPG line. As a fan of zombies, I knew I must try this RPG, even if I were to be the Game Master and not a player.

The End of the World is a d6 system, relying only on the use of these dice, along with a character sheet. Most checks in the game consist of rolling a number of positive dice and negative dice, as determined by the Game Master. Rather than a system where characters can be badly damaged and magically healed without consequence, this system tracks the stress on a character and results in traumas that can take time to heal (if ever). Interestingly, however, as characters gain more damage, they also become resistant to minor damage in the future – if you have a broken arm, then why worry about a stubbed toe?

Zombie Apocalypse contains 5 scenarios, each with different situations and types of zombies for players to encounter. Each scenario is broken down into “Apocalypse” and “Post-Apocalypse” chapters. Because it is based on the real world, the system does not provide details for every item, character, and location encountered. Instead, the book provides guidelines that the GM can use to determine necessary details, such as the attack and damage bonus for different types of weapons. The book itself is gorgeous and well worth viewing just for the artwork, all of which has a red hue. There are a number of times that I, as the GM, displayed the art of different enemy characters to my players because I could not help myself from sharing it. Based on current artwork on the website, the different RPG books within this line will each have a unique overall color theme. This is a cool feature that demonstrates Fantasy Flight’s dedication to delivering quality products. 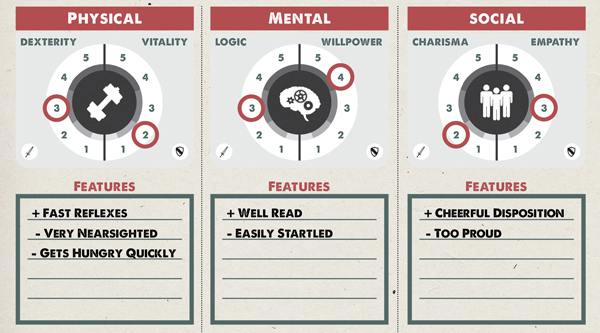 When players create their characters, there are guidelines for creating fictional characters, but the intent of the game system is for players to build themselves as characters. There are 6 base stats used for game play, 2 each in physical, mental, and social categories. The stats themselves range from 1 to 5. The goal of any particular skill check is to roll equal to or below the relevant stat. All players being with a 1 in each stat and are given 10 points to distribute as they see fit, with the limit of 5 being the highest possible result. Additionally, characters are given positive and negative descriptors for each category such as the positive “natural leader” and the negative “terrible liar” for the social category. The book provides examples of features, but players should be encouraged to develop their own, using the examples as guidelines. Leveling up is not the same as many are used to. Rather than earning defined experience points and gaining set skills, the GM and players discuss each other’s performance in a given session and codify performance as new features. For example, if one player failed a critical dice roll in a dangerous situation and that failure led to disastrous results, the GM and players may decide that the player’s character now has a negative feature of “performs poorly under pressure.” When the GM is determining the number of positive and negative dice a player uses for a skill check, these features can add positive and negative dice as well.

One particular area of interest is in the follow-up to character creation. When finished, players vote on each other’s stats. The GM organizes a blind vote for each character in every category.  Unfortunately, this may bog down your initial start to the game but can also be a fun and humorous experience. The group’s familiarity with one another will impact how willing they are to vote whether a character should get a boost to their mental stats, a drop in their social stats, and so on. To maintain a balance, players who receive changes to their stats can then make balancing adjustments to the descriptors of the related categories. Most groups I have played with were hesitant to change each other’s stats. But this step can be skipped if players are worried about hurting friendships or someone’s self-esteem.

As great a time as I have had running this game, I do have a few very minor complaints about the rules as currently provided. One has to do with fire-related weapons. Now this may just be limited to my players, but they frequently sought out these weapons to use against the zombie hoard. Surprisingly the book does not contain information on sustained damage like a zombie being burned to ashes. I am not sure if this was simply an oversight or a feature that the writers did not want to have present in the game world at this time. Fortunately this is easily solved by writing a house rule and keeping a copy with the book.

The simplicity of the overall system makes it easy to pick up and to explain to others. Without any previous experience with the game (or GMing in general), I was able to form quick scenarios and run a game with minimal need to pause and research rules in the book. As a GM, I have enjoyed the games as much as my players and nearly all my players have asked about playing again or even doing a long campaign.

I, personally, have come to love The End of the World Zombie Apocalypse and look forward to playing many more games and eventually developing a long-term campaign. The flexibility of the rules easily allows for implementing custom features and frees the GM and players to improvise as the game continues. Long-lasting effects of character damage make each session have an impact on the players. The End of the World Zombie Apocalypse is published by Fantasy Flight Games and can be found on their website and in your friendly local game stores. The next installment of The End of the World, named Wrath of The Gods, is currently available for purchase in the Fantasy Flight store. According to the website, future planned installments include Alien Invasion and Revolt of the Machines. With the quality I’ve experienced in Zombies, I cannot wait to see what else Fantasy Flight has in store for us. I recommend that you bring this adventure to your gaming table as soon as possible.