As opening scenes go, Paraic O’Donnell’s The House on Vesper Sands has the spirit of Portrait of a Lady or Pride and Prejudice. I’ve seldom read something so perfectly formed in tone, characterization, prose, and mood. Each word is in its right place, elaborating the setting and deepening our understanding of the characters with the kind of deceptive effortlessness that probably took a hundred revisions to perfect.  It felt like walking into a room where more lights turn on with each step you take, only those lights are, of course, gas lamps.

This is the late Victorian era of England, when steam trains and bicycles were the new arteries of the country, and London its dark heart. In one particularly shadowy corner is the home of Lord Strythe, who requires a seamstress to work only at night on a project he cannot use and never oversees. She knows something is deeply wrong, but it will take the combined efforts of a keen police inspector, a heartbroken lover, and a tenacious reporter to put a stop to some very literal darkness invading London. 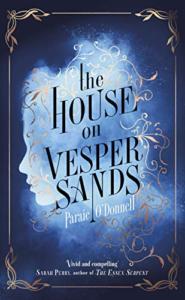 O’Donnell is a dab hand at character work. His characters feel both like specific archetype of the period—a vaguely Holmesian detective, an poor Dickensian lad, and so forth—but also like living, breathing individuals. Their skills make them heroic (or foolish), but their agonies make them human. Gideon is a hapless bumbler, but his tragic innocence keeps his comic moments from turning him into a jester. It is he who finally does something about the missing and stolen girls of London, when most others give up at the enormity of the task. He drags Inspector Cutter into the investigation, and the clever detective does most of the legwork—too little too late, though, to save his own lost wife.

On the other side of the socioeconomic divide is Octavia Hillingdon, an orphan-turned-lady-about-town. Probably no one else will find it funny, but I was amused by the fact that Octavia was plucked from the streets and adopted by a wealthy man, a trope that was exceptionally popular at the time. Octavia makes good on her lucky start by pursuing justice as a journalist, even though her editor would rather she stuck to the society pages. She has access to high society because of her adoptive father, and she wants to use it for more than stoking public awe of the upper class.

The English class system is very much its own villain in this tale, and O’Donnell explores the kinds of excess and exploitation that wealth made possible. Supernatural indulgence in the context of The House on Vesper Sands is not a shock; it’s the natural, ultimate consequence of unchecked power. How it is accomplished, and by whom, are the real matters of suspense.

A few middle sections of the book are slightly muddled, if only in comparison to the absolute clarity of the first chapter. Some of the leaps of logic the characters make are tenuous, even if we the readers know them to be true by dint of the multiple POV characters and literary conventions. All in all it’s not a terribly complex mystery, but then, this wasn’t meant to be an Agatha Christie novel.

It’s not a ghost story either. Oh, I could say that the aristocracy are ghosts, and that they haunt and torment those seeking a modern enlightened society, but let’s save the lit crit for those that want it. This is a supernatural novel that, like much of early supernatural fiction, defies categories because the categories did not exist at that point. O’Donnell actively works against conforming to the tropes and monsters that have been defined since, in part for realism’s sake, but also I suspect because his extraordinary talent does not need any crutches.

O’Donnell has a unique gift when it comes to his prose, and specifically his depictions of light. It’s honestly astonishing; I’ve never read any author who so consistently makes me feel the colors and subtle gradations of sunlight or lamplight quite like he does. He’s like the Vermeer of literature:

“The sun was setting when they came at last to London Bridge, and although they knew they must shortly return to his uncle’s lodgings, they turned and lingered at the parapet. Looking out over the river, they watched its surface cleave and fold in the slow wake of the barges, turning from copper and violet to rosewood and pewter, syrup and ash.” (198)

O’Donnell has played to his strengths in writing a story about “brightness and black air,” and also in shedding light on the subtler gradients of privilege and power. In a way that is thoroughly modern, O’Donnell has somehow contrived to bring the best of the late-19th century novel together with a clear-sighted critique of the era itself.