The X-Files became a cultural phenomenon because of its willingness to go for broke on ideas that, like the truth, were really out there.  The following, in order of air date, are the best examples of that boundary-pushing blended with humor. 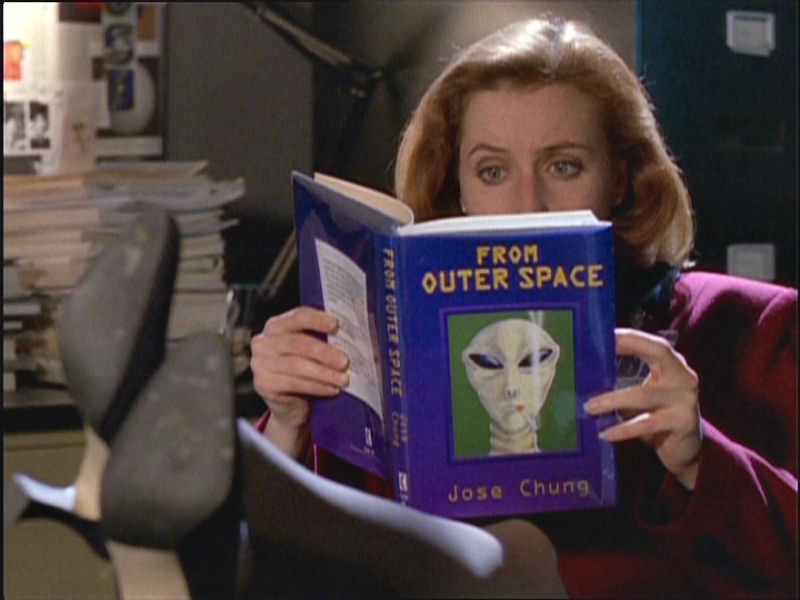 Like “Once More, With Feeling” from Buffy or “The Monster at the End of This Book” (and all subsequent meta-episodes) from Supernatural, this episode was a foray into some fourth-wall-bending (hey, I found the idea for the next Avatar series!) shenanigans that only work when characters are well-established and well-loved.  It was a bit of a risk to take in 1996, when the X-Files was only in its third season, but it paid off, showing some real versatility in the writing and acting.

The setup is an author interviewing Scully for his next book, but rapidly devolves into a variety of conflicting he-said she-said tales.  The characters all claim contradictory things, renege on those claims, prove themselves unreliable, and generally muddy what might be a mundane crime–or an actual alien abduction (or several).  There’s a nice commentary on the show’s favorite phrase “the truth is out there,” because it paints the truth as entirely subjective, a risky move for a show that also wants us to believe.  But the ambiguity works in its favor, setting up some really fantastic jokes at its own expense.  It’s as if the writers are shrugging their shoulders to say, “yeah, there’s a lot of nutty stuff out there.  Isn’t that awesome?” 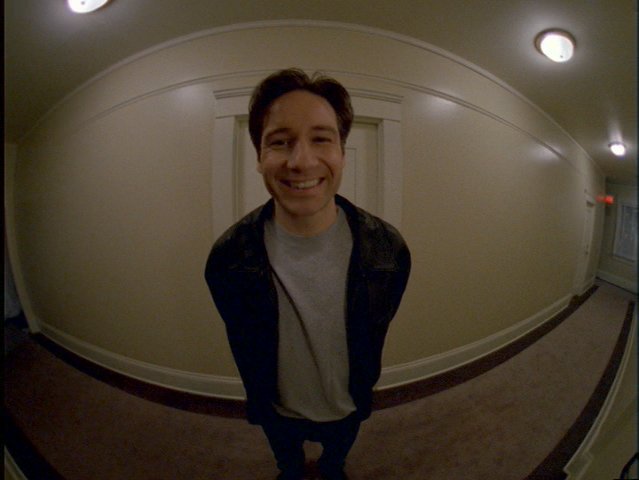 Anything that begins with mistakes at a sperm bank is either going to be stellar or really crash and burn, and fortunately, “Small Potatoes” manages the former.  It’s not really about the babies, even though the episode starts with Mulder and Scully investigating a baby born with a tail to a mother who claimed the father was from another planet.  It’s about shifting shapes and shifting identities–and what it really means to be a loser.  Not the most pleasant topic, but the cast makes deft work of some rather Shakespearean instances of mistaken identity, wringing humor out of awkwardness and oddness.

There are elements to this episode that are uncomfortable, most importantly the issue of consent.  I think it merits discussion, but I also think that, since it revolves around situations that would be impossible in the real world, that we don’t have to treat it as the main or overshadowing issue. 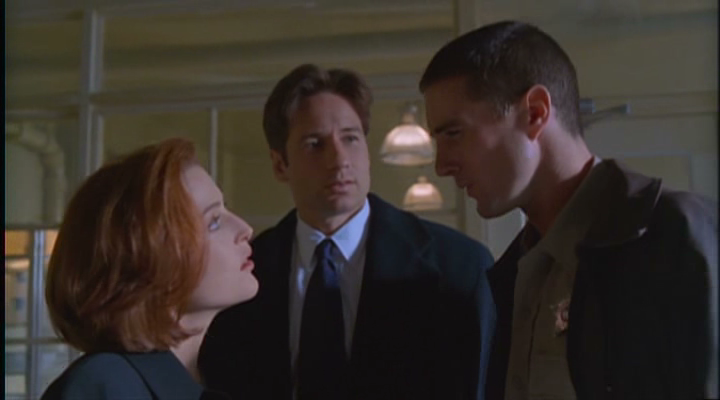 This is another not-quite-meta episode that plays with the idea of subjectivity, only this time, it’s entirely in the agents’ heads.  Mulder and Scully are in deep trouble, and they begin by trying to get their stories straight.  What follows are two wildly different accounts of the same events, from their observations of the hypothetical vampire they went to track down, to their portrayals of each other.  From Mulder’s perspective, Scully is the unreasonably grumpy and never listens to his exquisitely brilliant deductions; from Scully’s perspective, Mulder is like a little kid who’s had too much sugar and goes tearing off to wreck things the minute she leaves him alone.  The contrast is delightful, each version distinct without pushing anything into campiness.  It’s just good fun. 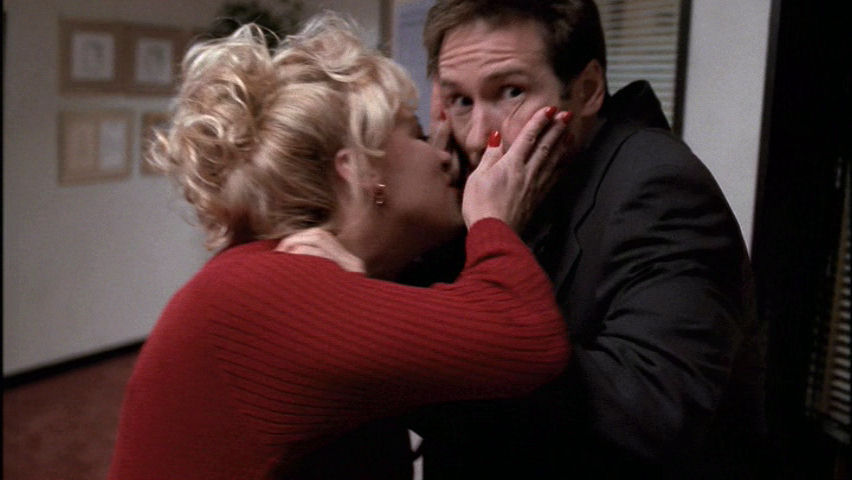 This is an incredibly schmaltzy episode that fans either love or hate, depending on whether they were ‘shippers or not.  Mulder and Scully go to a remote town to investigate a man, who claims he can control the weather, and obviously nothing is as it seems.  Scully predictably drags her feet, Mulder predictably has wacky ideas, and there are some predictable twists and turns along the way.  What makes it fun isn’t the mystery; it’s the characters, who, despite being rather dim collectively and individually, all seem to be in on the big central joke – the assumption that Mulder and Scully are a couple.  The whole episode plays coy and, yes, a bit cutesy with what everybody seems to know except the agents themselves. But, by this point it was a running joke–six years running, in fact.  Nothing to break the (sexual) tension like a laugh.

The characters are somewhat goofy caricatures of small-town hicks, but they’re portrayed lovingly and sympathetically, unlike other episodes in which suburbanites or small town dwellers are uniformly naive or monstrous (see “Home” and “Arcadia”).  We want them to find love and happiness, which is, oddly, what this episode is all about. There’s really no monster in this Monster of the Week episode; just a lot of drama tangled up with some supernatural goings-on, and a whole bunch of winking. 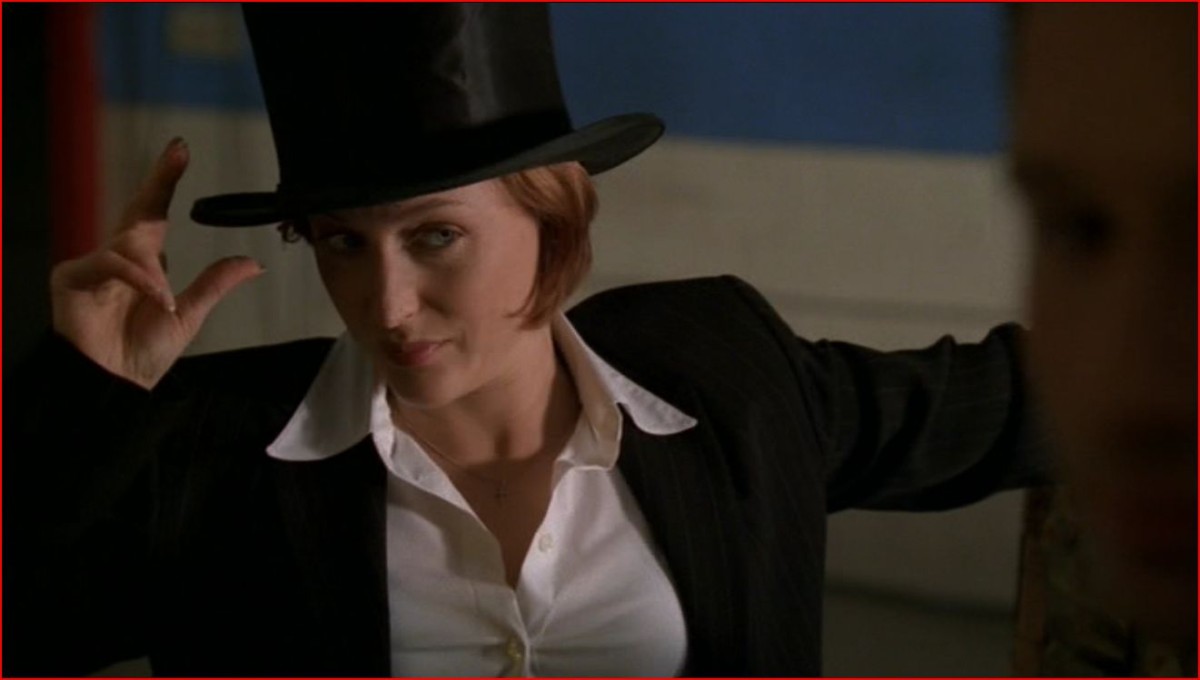 Rather than tweaking the ‘shippers for laughs (which I’m sure was always fun for the writers), this episode nevertheless relies on Mulder and Scully’s relationship to sell the humor.  It’s not about their relationship, but it is about their chemistry, which the show uses as a contrast to another charismatic duo, the magicians Maleeni and LaBonge.  This is The X-Files take on Ocean’s Eleven, an episode that just wants to have cool people running around doing cool things, just to make us smile.  Oh, there are stakes – what with fraud, theft, decapitation, and a whole lot of mistaken identity – but it’s really nothing without the battle of wits and dueling parlor tricks that everyone employs.  The later seasons really eased up on the darkness and horror, not always to good effect, but here we can forget the iconic atmosphere if it means spending time with the agents merrily bantering their way through the hour (and Scully in a top hat).