Imagine that The Martian and Lovecraft had a baby that was raised by the Alien franchise and you probably have a good approximation of Walking to Aldebaran, a novella by the prolific Adrian Tchaikovsky. It features our snark-savvy hero Gary Rendell as he gets separated from the rest of his crew and tries to find his way home. Except that he’s not on Mars trying to grow potatoes, he’s on a massive spacetime-defying object floating near the Kuiper Belt. And he might be alone in the sense that he’s been separated from other humans, but there are plenty of things that really want to make his acquaintance. 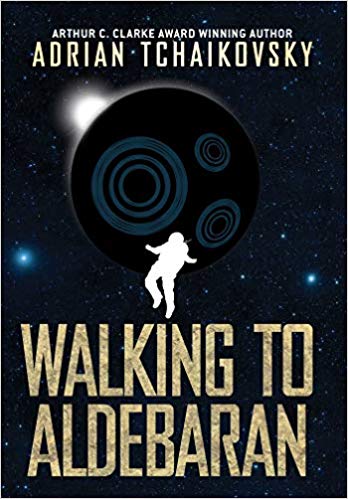 It sounds mostly straightforward, but Lovecraftian elements seep into this evolving disaster at a steady drip. Chronologically, it starts with the object in space, which gives increasingly odd readings to the two probes sent out, and then even to the human crew’s perceptions when they set foot on its surface. It’s somewhat smaller than earth’s moon…probably. But it also might be bigger than all of spacetime, since it contains multiple wormholes that join up different star systems, and even things outside the universe. The only way to traverse these wormholes, though, is to walk. Spaceships won’t fit and probes get lost. And so Gary walks: through strange gravity, through inhospitable atmospheres, through monsters and muck and misery.

The book is split between Gary’s current predicament and the events that led up to the fateful mission. It’s a smart way of increasing the sense of temporal and physical displacement, since the chapters are short and the book moves at such a fast pace that there’s always a slight lingering sense of uncertainty. Are we properly oriented in time? Have we got all the facts right? No time to think, only to plunge on and hope we’ve got everything we need.

Walking through the labyrinthine Crypts, as Gary dubs them, is bad at first. He’s hungry, he’s exhausted, and he’s alone. Then it gets worse. He realizes he’s changing, but without other humans, he can no longer be quite sure what’s normal anymore. Is he crazy? Does it matter? All he wants is to get back to his crew, but will his crew even comprehend what’s returned to them, a creature who knows too much about the paths between stars wearing a Gary-shaped face?

Those astronauts—and this isn’t a criticism so much as an observation—are maybe slightly too stupid and panicky to be the elite team assembled by the world’s nations. They act much more like sci-fi movie character tropes than scientists, but then, Walking to Aldebaran is much more a paean to SF Horror than an attempt to be realistic. I don’t mind that the book took this direction, but be aware that the Martian-like tone is not indicative of a science-heavy read.

Besides all the SF Horror flicks, there are some very nice nods to classic literature, especially Beowulf. You don’t have to know anything about Beowulf to enjoy this novella, but if you do you’ll immediately want to go read Grendel when you’re done. Or if you want (somewhat) more realistic SF Horror with a Lovecraftian twist, you might want to read The Dry Salvages by Caitlin R. Kiernan. That’s about the same length and has several similar themes, though it isn’t funny. Walking to Aldebaran is sly and even occasionally laugh-out-loud hilarious, for all that it’s creepy and deranged. That makes it a quick read, but be warned, some of its darkness will linger.