I promise when you finish the review that title will mean more to you, but first let’s talk about why you should read this comic in the first place.  I mean, with hundreds of  superhero-type comics from big name publishers, why should you venture out of the familiar and read “Saga”?  Well, it’s simple…it has a fantastic story, talented artists, and is from a relatively smaller but well-established publishing company called Image (they also do “The Walking Dead” comics if you are interested).  I won’t sugarcoat anything and tell you I have read an abundance of comics to compare with Saga, because I haven’t (I’ve read a few “X-Men”, some “Deadpool”, “Watchmen”, etc.). But I will tell you that Saga really stands out among the comics I have read.  Now, be warned, these comics are not for people easily offended by either language or questionable activities. Were I to give Saga a game rating it would have to be “M for Mature”, but don’t let that distract you from its greatness.  This review will be for the trade volume 1, containing issues 1-6. (which you can buy here) 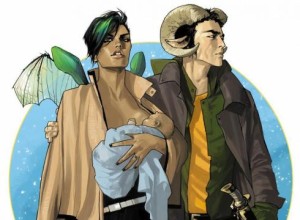 Alana and Marko…it’s hard to pull off fierce breastfeeding, but she is killing it.

Saga opens with a story of forbidden love, a raging cultural war, and a fight for survival all taking place in a beautifully woven science fiction world.  Well, it technically starts with the main female character, Alana, giving birth while she and her husband, Marko, are attacked by military forces on the planet Cleave.  Marko was a prisoner of war and Alana was ordered to guard him, but instead they ended up running away together and getting married and….ahem, you know, which leads us to the opening scene.  The comic follows their perilous journey on Cleave to the fabled “Rocketship Forest,” where they hope to find transportation for their escape.  During this journey Marko and Alana struggle to survive the “Horrors,” evade mercenaries (named for their skill sets, ie The Will, The Stalk), and endure other unexpected adventures. 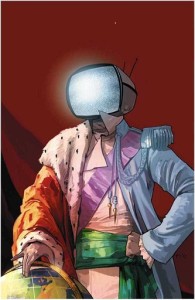 Worst part is there is apparently never anything good on….

You may be thinking, “Okay well this doesn’t sound very exciting…what’s the big deal?” The great thing about “Saga” is the detail in the stories: the characters, the world-building, and the visual aspects of the comic.  Let’s start with some of the characters. There are some normal humans in the story, but for the most part people have horns (like Marko), wings (like Alana), animal bodies, or, you know, TV heads….yeah you read that right.  Prince Robot IV (pictured above) has a normal body and a tv for a head (and not a flat screen, it’s a CRT! Oddly enough, Prince Robot IV isn’t necessarily the weirdest character you will see in Saga. Once you get to the section on Sextillion (yes, it is a place designated for exactly what you think), the “people” get stranger.  In additional to the unique characters in Saga, the language used is engaging for the reader just because it is so colloquial. By using fairly basic speech and a “normal” way of speaking (they aren’t above cursing), the reader isn’t trudging through convoluted, unrealistic dialogue.  The characters are to the point and blunt, making the reader more able to experience the story.

So join me in this “Saga” and read the comic! The details are fantastic and the writers are creating a great story that is FAR different from pretty much anything you will find in your traditional superhero comics.