To be an Archivist in Wasp’s world is a far more coveted position than in our own. For starters, those who don’t make it are killed. And those who do gain possession of the only items known to ward and capture ghosts. They also gain the grudging tribute of a town barely scraping by, ensuring their survival—at least until the next round of competitors come up through the ranks to try to take the title by force. 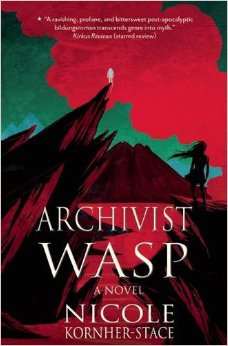 Wasp hates the system from top to bottom, but thus far, her escape attempts have only earned her more scars from Catchkeep’s priest, who mediates between the living and the dead, the blessed and the mundane, the gods and the mere mortals. The goddess she serves is silent, so when a ghost appears and offers her an unimaginable prize in return for her help, she’s tempted. But how can she navigate her world and the ghost’s world while keeping her life and sanity intact?

The world and writing was immediately reminiscent of Caitlin R. Kiernan, so expertly bleak and grim and cruel that I wondered for a moment if there wasn’t some kind of pseudonym switcheroo going on, JK Rowling/Robert Galbraith style. But no, and as much as I love Kieran, I’m glad she didn’t write this book. Kornher-Stace infuses her narrative with much more character development and hope, and actual resolution to conflicts both internal and external.

In short, Kornher-Stace knows exactly how to write for an audience. Her action sequences are flawless: the language and imagery is precise, nothing distracting from the narrative. But when she needs to pull out the stops, her wordsmithing is remarkable to behold. She doesn’t over-explain, but you do get an immediate and thorough sense of the world(s) she’s created. It reminds of nothing so much as Gene Wolfe, the way she drops you into a world of magic and dilapidated technology and gives you just enough to stay afloat and to feed your sense of wonder. I savored her metaphors, and the scenes of emotional revelation were gut punches in the best possible way. This book had more creative juice and emotional depth than books twice its length.

Given how bloated books have become of late—some justifiably so, others not so much—I’m always impressed by a narrative that cuts all the flack. This is a lean, mean book with a lean, mean main character, and among all the post-apocalyptic dross, it’s pure gold.