When Pride and Prejudice and Zombies came out, I was as delighted as anyone else. What a clever concept! I thoroughly enjoyed it for what it was, a not-too-serious romp through Regency England and a droll abuse of copyright loopholes.

And then came the swarm. I would go into more detail, but as with most things, Kate Beaton has done it best.

The sub-genre is still limping along, occasionally rearing up from the larger genre of Victoriana with its parade of Draculas and brooding nobles. A lot of it’s written by Americans who don’t quite get the class system but really like corsets. But hey, sometimes it works. I’m game for the good stuff. 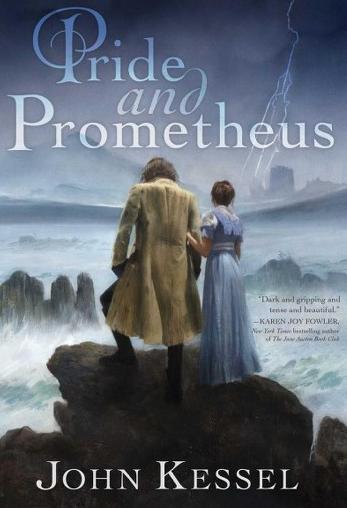 Pride and Prometheus, by John Kessel, is almost, almost the good stuff. Kessel begins with Mary Bennet, the homely and awkward middle sister, having had a few years to grow since the events of Pride and Prejudice. I always did wonder what happened to Mary and Kitty, and I was excited to see a take sympathetic to Mary. She’s always been to Austen what Susan was to Narnia, the one who didn’t fit in. But it seems that she’s matured and grown as a person–just in time for her to meet Dr. Frankenstein, a man who will (sort of) take her budding interest in naturalism seriously, and who will also make a bloody wreck of her life.

With this and Theodora Goss’s The Strange Case of the Alchemist’s Daughter I wonder if Saga Press has some particular fixation on supernatural Victorian mashups with feminist impulses. Which sounds like a netflix category that I would watch, but after so many books on this topic, it’s no longer something I want to read.

I say “feminist impulses” and not actual feminism because I don’t think Kessel really manages it. We get some properly infuriating condescension from men to women, especially where class is concerned, and rebuttals to it. Mary does grow into a more confident advocate for herself, but the men are mostly horrible murderers and neither of them actually respect Mary with their actions. They don’t learn. That’s the problem with choosing Frankenstein: a lot of the conclusions are foregone. There are too many boundaries from the original narratives to really have breakthroughs and still leave those originals intact.

That’s also the problem with taking the mashup so seriously. Austen is a titan of English literature; Shelley literally invented the Science Fiction genre. No one is judging Pride and Prejudice and Zombies by those standards because it’s self-aware and fun. But Kessel isn’t playing around. And unfortunately, he’s just not Shelley or Austen.

Not to say that he isn’t good, though. Mary’s and Victor’s voices are generally consistent with the original works (and if Mary’s sections lack Austen’s wit, at least Victor isn’t self-loathing to quite the same voluminous extent) and the execution is meticulous. This is clearly a labor of love, respect and homage. At least to most of the characters.

I was disappointed to see that one of the characters kind of gets fridged. This character dies to advance Mary’s plot as much as Victor’s, I suppose, but it’s still an uncomfortably convenient demise that serves little other purpose. The characters were motivated by her death but not entirely moved. Little time was given to mourning. The dead girl isn’t murdered—she dies of an illness—so there’s a bit of leeway, but I still felt a bit taken aback. It was sudden and wretched, and the story didn’t succeed in justifying it, especially not when so many other characters secondary characters got tidy wrap-ups.

Consider Mrs. Bennet, who after a lifetime of shrill vanity finally has an inkling of what she has cost her daughters. It’s not entirely unearned, but it also feels like wishful thinking. Or Mr. Bennet, whose heart-to-heart with Mary is more in line with his character from Pride and Prejudice but still feels a bit pat. These are the things we wish the characters would say, and maybe it’s pessimism on my part, but to actually see them say it feels like fanservice and not literature.

Other than these moments of wishful thinking, I don’t know that this book has a whole lot to say that hasn’t been said before, either by the original novels or by other writers (see especially Remarkable Creatures and The Lie Tree). Other than Mary, most of the characters are not terribly changed from the originals, which begs the question of why this was written. To express love for Shelley and Austen? To see what happens when you smash together two novels that express different sides of the word “romantic”? I don’t think it’s entirely unsuccessful, but I also don’t think it transforms or transcends its sources. This is by a fan for other fans. If that’s you, it’s good, it’s well-written and well stitched together, a proper monster. If that’s not you, maybe just read the one with the zombies again.