One of the blurbs on the back of A Borrowed Man describes the book as “Wolfean.” Meaning, that it was written by and is quintessentially representative of Gene Wolfe, one of our modern SFF masters. This is simultaneously a very silly and very true thing to say, because of course what he writes ought to be “Wolfean.” It ought to be distinctly his. But when you get down to it, “Wolfean” is really hard to pin down. This book is a prime example, since it’s an homage to pulp detective novels in subject and tone, the prose at times so purely 1940s that you would be hard-pressed to link it to his other works. But it’s equally hard to link those works to one another. Wolfe doesn’t stick to any one thing, or I suppose I should say: nothing sticks to him. He does as he pleases with time and space and mythology, and does quite well. 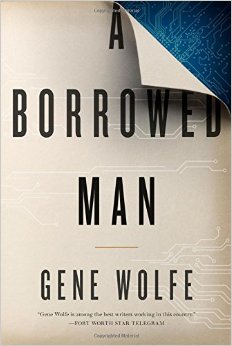 The one thing that might link his disparate stories is the third act rug-pulling. It’s never quite so simple as a twist, although it will spin you around quite a bit. Exactly 2/3 of the way through A Borrowed Man, there is an eye-popping revelation from way, way out of left field. And yet somehow, the narrative doesn’t break down. The characters behave as they always would. It’s Wolfe’s particular talent to shake up his own worlds like snow-globes and then watch the dust settle again. Even here, where the world is so clearly drawing on other authors’ works.

Raymond Chandler and Roger Zelazny were definitely peeking over Wolfe’s shoulder and gleefully crossing out adjectives while he wasn’t looking. It has Chandler’s attitude toward men with guns (namely, that a lot of them should be introduced) and Zelazny’s flair for cool-headed characters in a crazy world. But mostly it reminds me of Jonathan Lethem’s pessimism from Gun, With Occasional Music. It’s not a nice future. Oh, sure, world population is down, but we apparently haven’t gotten rid of murder and organized crime, and our ethics haven’t kept pace with our technology. E. A. Smithe is a reclone, a clone given the personality of a famous author but not the rights. He’s kept in a library on a shelf, a living, feeling human, and he isn’t even allowed to write. People can check him out, and if he’s “damaged,” they’re obliged to pay a fine; if he’s badly “damaged,” he’ll be burnt and a new copy might be requisitioned. When asked what he thinks of this slavery, he’s very matter-of-fact: “It’s worse than criminal. It’s factual.”

And with the panache of any hardboiled detective, Smithe then accepts facts as facts and gets on with solving the mystery. This particular mystery revolves around a book that he wrote–or rather, that the original Smithe wrote–that was the sole item in a dead man’s safe. Conrad Coldbrook, Sr., was a financial genius who kept his family well-supplied with luxuries, but kept them firmly out of his business. His children were left without answers after his death, and now Colette Coldbrook wants Smithe to help her unravel the secret of this book. But secrets beget secrets, and soon Smithe and Coldbrook are on the run, matching wits with the law, their enemies, and even their allies. And only then does Smithe discovers something truly strange…

It’s important to note that this book is very much riffing on the hardboiled classics, because there are elements to it, like the treatment of women and the disabled, that seem at first to be relics of a less enlightened era. But it’s not a slavish imitation, since its aware of these issues and tries to undermine them. I won’t say that it’s a rousing victory over past injustices because it’s not, but it’s not meant to be. Likewise it’s not meant to be pure sci-fi or futurism or anything else.  It’s meant to be an homage from a modern standpoint, and it succeeds quite admirably at bringing the past and the future to us here in the present.