So, I did something dumb and started A God in the Shed, by J-F. Dubeau, late at night. I’m not really a horror buff, and this book is straight horror, no mixer, no chaser.

There’s…something…that lives in the town of Saint-Ferdinand. A spirit, a small god, a devil, an evil—something. There’s a serial killer too, a person or thing responsible for the disappearances of dozens of people over several decades without leaving any clues. And then there’s an eerie carnival, exhumations, ghosts, ritual sacrifices, and some seriously unfortunate artwork. 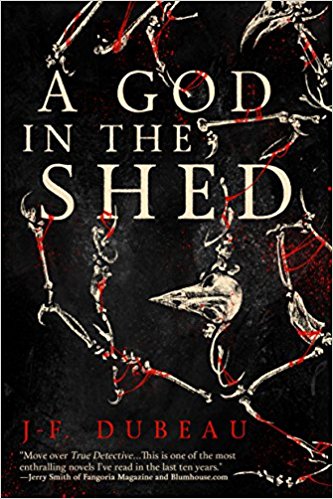 I liked most of the characters. The inspector with an anger problem, his motherly son, the trio of smart but unwise teenagers, the medical examiner who knows far more than he’s letting on…there’s a large cast but it’s well-rounded. They all have pieces of the puzzle, and not the typical ones, either: Crowley, the investigator, knows far too much about cults, and Randy, the medical examiner, is a part-time necromancer. It’s these deviations from the typical archetypes of horror that really set A God in the Shed apart.

If there is a central character it’s probably Venus, a transplant from another town whose grade-skipping smarts and ignorance of local customs make her a target for bullying. She’s managing all right, but then several tragedies hit close to home. She’s looking for answers outside of the norm, and…well, she finds them.

Venus is mostly well-drawn, though she could benefit from some more quirks and specificity of her quirks to really ground her. Mostly we know she opposes her parents for being too liberal and permissive, which is…odd. Well, her parents are also…odd. They don’t really check in about her whereabouts, which Dubeau describes as “free-range parenting,” but sounds to me more like “mind-boggling absenteeism.” He describes Venus’s parents as well-meaning hippies, but there is a serial killer out there who restricts kills to the village limits. What, exactly, is the cause of such insanity? A lot of these little instances of unclear or poorly thought-through motivations litter the text. Nobody suspects the local kook? Nobody clamors for provincial or national help after the tenth or twentieth killing? It’s not that they really impact the thrust of the narrative, but they do undermine the characters’ credibility and the reality of the world.

And yet, there are instances of compelling and insightful psychologies. When Venus encounters a strange presence, her internally conflicting reactions are really very interesting. She enjoys darkness and power as much as she wants to do the right thing, and seeing that come across without assigning her to some kind of larger moral spectrum is innovative. She’s not an innocent girl or a wicked malefactor. She’s just a smart kid with lots of different feelings and needs.

This is also one of the best-paced horror novels I’ve seen. No artificial withholding of information, no infodumps about restless spirits, and no gore-porn. It’s gory, but all the blood and guts at least serve a narrative purpose. It’s meant to unsettle and evoke our sympathy for the victims—not valorize the killers. After far too many would-be serial killer antiheroes, I’m relieved.

It would have been wholly engrossing if not for a small but persistent issue. I cannot understand the author’s tendency to eschew pronouns. He constantly says “the teenager,” “the girl,” and so forth instead of just using “he” or “she.” It is so pronounced that it really started throwing me out of the narrative each time it happened, which was often. There wasn’t any reason for it—the author wasn’t emphasizing the character’s age or gender. It was purely for word choice variation, as far as I can tell (or an unwillingness to believe that readers can understand context when reading something like “he told him”). In addition to being head-scratchingly unnecessary, it was also inconsistent. Daniel Crowley, an older teen, is referred to as “the teenager” but also “the boy.” These designations are different and cause confusion.

Even so, is it weird to be fond of a horror novel? Probably. But I do feel a certain affection for this book. It’s so innovative and clever. Dubeau has it, whatever it is that makes books compelling and characters interesting. Moxie, maybe. Moxie just needs a different editor.