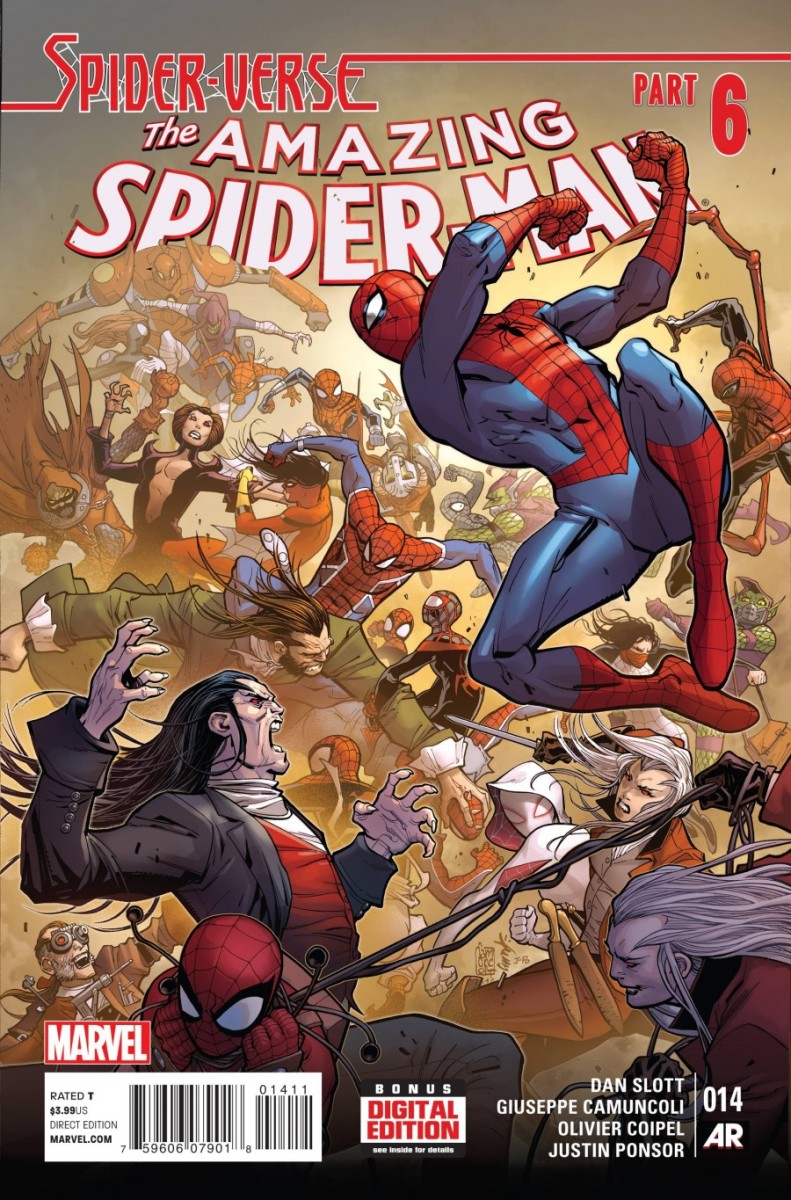 I’m going to be upfront here; Spider-Man is my favorite superhero. This might lead you to believe that I will pour praise over every issue of Amazing Spider-Man that comes out. This would be quite incorrect! By having Spidey as my all time favorite, I can be quite critical of his stories. Case in point this current Spider-verse storyline. It has been interesting in parts but overall, I would say that the story lacks a lot of punch it could have had. This could be from a number of factors but I think the looming event of Secret Wars neutered the potential this arc had with the twists it introduced.

Let me catch you up to speed: this group called the Inheritors have been jumping from dimension to dimension killing the Spider-Men there and enslaving his classic foes to be used to hunt even more webslingers. The remaining web heads band together to finish off the Inheritors once and for all.

There were a lot of great hero moments throughout this book, but Slott focuses too heavily on the action and the individual moments don’t really get their time to shine. This issue boils down to a giant fight where our heroes have to outsmart the bad guys. It’s fun to watch but it isn’t exactly the emotionally rewarding experience you would hope for. There were a lot of story angles that could have played out with much more gravitas, but they are sped over to push the plot forward. I like how Slott writes the character of Spider-man and his cast of regulars, but he unfortunately falls short on executing the plotlines. He has great ideas that often don’t pan out as I think he would like. Slott has been writing Spider-Man for a very long time and honestly, he might need a break. Hopefully the epilogue to this arc (next issue) ties things up better than this one did.

This issue switches artists halfway, with Coipel on the first half and Camuncoli on the latter. Ponsor (the colorist) and the editing staff did a great job making the transition between the two artists mid-book, but the differences can be off-putting. Coipel fills his section with wonderful two page spreads that enhance the storytelling, as well as looking way cool. Camuncoli, while still good, doesn’t seem to take as may risks. He’s another Spidey regular that I feel needs to step away from the character and do something else for awhile. His work has been on a slow decline on this book, and it’s a real shame.

If you love Spider-Man like me, you’re already getting this book and homing in on the parts you love. If you are looking for a jumping on point, this is most certainly not the way to go. Give it a few more issues (once all this Inheritor business is wrapped up).