A husband, wife, and their two children living comfortably in the suburbs is the perfect place for a spiritual manipulator to wreck havoc. The opening scene is of the family hiding from an intruder. Within paragraphs, the intruder Marvin is revealed to be a man who actually met the family the day before at a restaurant. Slowly, but with surgical precision, Marvin morphs from stranger all the way to being Hendrick’s brother.

There’s more than meets the eye in Bedfellow by Jeremy C. Shipp: this seems like a rather normal, happy family but underneath, each member is going through their own turmoil and means of sifting through reality. It’s a reminder that we never really know what people are dealing with behind closed doors. “Be careful what you wish for” is the motto that comes to mind. Marvin offers the family pieces of his consciousness, little “helpers” to the assist and open interesting truths about each family member as their desires are laid before them. Father, mother, son and daughter go about their lives invoking the helpers when possible, until one helper divulges the entire scheme. This story is a perception of domestic life, a tale of desire, lack thereof and how humans will accept anything, even evil, into their homes for the chance at rebirth. 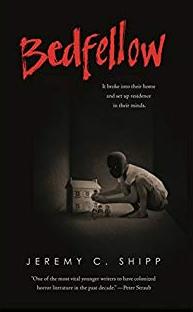 The premise of this novel is incredibly original but uses a common theme to anchor the reader: desire. The way the author gradually moves the characters consciousness from point to point is done delicately and tastefully. This isn’t a typical haunting story. I like that the author stayed away from the usual tropes, yet the imagery is beautifully gruesome.

“Tonight, while she makes her way through the hall, she pictures a man leaping from one of the bedrooms. And after she swings wildly with the bat, she realizes too late that she’s smashed Hendrick in the face, his nose gnarled, his teeth tumbling down a waterfall of blood.”

The characters are incredibly well rounded. There are four main characters: Hendrick, his wife Imani, his daughter Kennedy and his son Tomas. Each section is prefaced with their name, giving a clear orientation of who’s experience the reader is going to delve into. With this, it’s easy to stay surface level but the author really digs into the characters throughout this novel. I could see life moving forward though the setting didn’t change too much.Because at the end of the day, the focus isn’t on the entity that enters the home but them and how they interact with it.

The plot is slow moving, more focused in the individual moments instead of the progression of what’s happening, until the author reminds us not to take for granted what we’ve seen so far. I was beginning to believe that maybe I’d just read the opening pages wrong. That’s great writing: the author just lied to me and kept so true to the lie that I began to believe it. Suspenseful and moderately paced, this was a fairly short read at less than 200 pages but I found myself genuinely intrigued at every moment.

Sometimes horror will use gore overwhelmingly. This title focused more on playing mind games that left the reader mentally exhausted in a delicious way. Bedfellow pulls back the curtain of domestic life, daring to explore the unit that our society often says will give satisfaction and worth. The author takes this notion and not only spins it on it’s head but shows the reader how in which it could be used against someone. The writing was beautifully crafted, meticulously well thought out. Every scene felt deliberate and necessary even if its purpose wasn’t initially clear. If you’re looking for a book to entice your senses and leave you questioning reality, then Bedfellow is a book you’d love to dive into.

Bedfellow will be released November 13.