No, this isn’t any kind of Oz story, but a black-hearted girl with magic powers, a magic ruby, and the meaning of home do feature prominently, so the title is still apt. Ava, our anti-heroine, is looking to get back to her home after being swept up in–no, not a tornado, but certainly in her father’s endless cycling of research and despair. He’s dragged his children to a sleepy little town in the hopes of doing some paranormal research, and want as she does to please him, Ava also just wants to get back to LA.

But there’s no going back. Ava knows this as well as anyone, since she’s been expelled from high school, lost her mother, and watched the family fortune disappear. Or she should know this, but she still has hope. Hope that her father will come back to his senses, hope that she won’t be stuck in the middle of nowhere forever. But it’s clear that to make her wish come true, she’ll need the ruby. 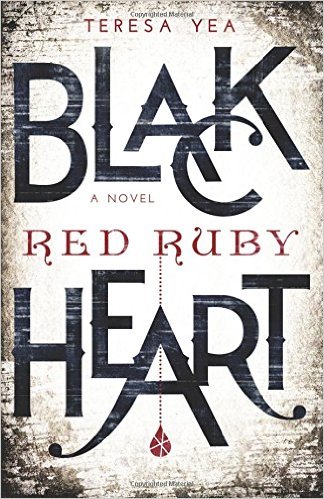 The ruby is called Arabella’s Curse, and it of course has a suitably Gothic origin and significant body count. It has transfixed her father and her new enemy, Ben, a local guy who also has some familiarity with secrets. But Ava is a daredevil and a maniac and a desperate lonely girl, and she knows that the ruby should be hers. After all, she revels in her own wickedness and power, her only consolations. She wants the world on a platinum platter–but first, the gem.

Ava is a definitely crazy and mean, and remarkably sympathetic to boot. But to me, the best Queen Bee can be found in Falling Into Place, a remarkable and rather overlooked novel by Amy Zhang. There, the seemingly irrational or impulsive cruelties of the main character have a much more deeply felt pathos behind them, and piercingly good writing to back them up. Here, Ava’s motivations are certainly impulsive, but lack the kind of clear, strong internal logic of either thought or feeling. It’s not that her motivations are lacking–they are even a little too explicit, in a way I could never have articulated as a teen–but her internal chaos never quite resolves into a consistent character. Instead, she and all the other characters serve the plot, and devolve here and there into melodrama, the kind you’d expect of the CW.

This is a hard thing, to have the characters drive the plot as much as having the plot drive the plot. It’s subtle and difficult to suss out, so I give Teresa Yea a lot of credit. There’s a lot of potential here. But having Ben disbelieve and blow up at Ava a second time, after Willa’s machinations proved so false the first time–and having Ava seek yet more revenge–is too much. Events like this throw off the pacing, make the characters into caricatures of volatile teenagers.

Ava’s mother is another driver of plot, as is Ava’s relationship with her mother. So when certain revelations arrive, the action makes sense. What doesn’t make sense is the lack of reflection. Ava takes one particularly drastic action that doesn’t seem to reverberate as much as it should. Now, granted, there’s a lot going on and not a lot of time for reflection. But I would expect something. Ava reacts so strongly to a crush’s opinion of her, but hardly at all to certain remarkable facts about the woman who raised her and tried to kill her. Then again, Ava undergoes significant transformation by the end–I just would have liked to see the processes at work a little more that led to that ending.

Speaking of–oh, the ending. My god, the ending. It took some serious balls to write that ending to a YA book, and I applaud Teresa Yea. I standing ovation her, in fact. Full marks for avoiding cliche, for letting bad things be bad, and for letting Ava finally realize them for what they are. It was worth the occasional raised eyebrow at Yea’s style to get to that finale.

Despite its flaws, I devoured this book in a few days, and I did thoroughly enjoy it. It’s fast, it’s wild, and it’s fun. There’s horror and magic and romance and murder and even a creepy rich uncle–what’s not to enjoy?