The Bone Garden, due out next week, has already been compared to The Graveyard Book and Coraline, which is certainly accurate in the broad strokes. It takes place in a graveyard, and features two children having dangerous adventures between the tombstones. And like Coraline, the heroine is a young girl investigating a very strange mystery, one that even involves a disembodied, sentient hand. 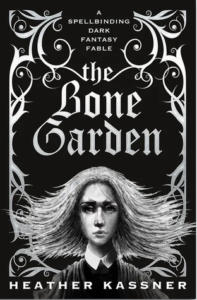 Nevertheless, it’s a bit unfair to compare debut author Heather Kassner to Neil Gaiman at the height of his powers, since The Bone Garden can really only suffer by close comparison. Yes, the themes are similar, but The Bone Garden lacks Gaiman’s concise worldbuilding and mythic prose. Better, I think, to compare it to another creator in a different medium, one whose work is far more similar in tone: Tim Burton.

That combination of charming and creepy that Tim Burton excels at is also a feature of The Bone Garden. Both creators have a world that seems dark on the surface, with graveyards and dead people, but are actually quite full of friendship and delight under the surface. They even share the too-thin, gangly aesthetic, and it’s easy to imagine the bone-born children animated in clay, singing and dancing on skeletal limbs.

Irréelle is a mismatched heroine just like Sally or Emily (the titular Corpse Bride), eager but a little bit awkward. All the characters are a little bit awkward, in fact—slightly odd and slightly akimbo to the world they inhabit. Irréelle isn’t a plucky adventurer, she’s nervous and desperate to please Miss Vesper. Fortunately, the nice thing about both Burton and Kassner’s work is that these oddities are features to be celebrated, not flaws to be condemned. Irréelle might need to get a bit braver, but it’s her eagerness to help and to fix things that makes her so compelling. And like Sally and Emily, she just wants to be loved and cherished. 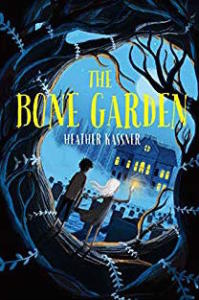 Unfortunately, she wants kindness and affection from the wrong person, her creator Miss Vesper. Miss Vesper is a delightfully spooky villain, cold and malicious with a dramatic streak. She demands absolute perfection from Irréelle, despite her own failures at her mysterious task, one that demands her constant work in a creepy attic laboratory. Her work requires bones, which she makes Irréelle extract from a labyrinth below the graveyard. And when Irréelle makes even the tiniest mistake, Miss Vesper berates her and threatens to turn her back to dust.

It’s a wicked premise with a lovely little mystery at its heart, one that I was glad to read straight through in one sitting. Kassner could have pushed the powers of dust and bone do more, perhaps, but there are some truly excellent turns of phrase and some really heartfelt scenes that make this an excellent middle grade début. It would also make a wonderful Tim Burton film—fingers crossed.