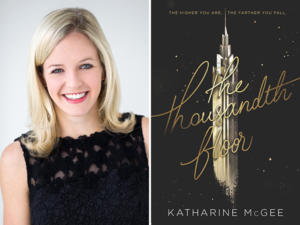 I thought when I picked up a copy of The Thousandth Floor I was basically going to a vending machine to get some brief, brightly colored enjoyment that might make me feel slightly gross but overall do very little. Instead, I got this rich, deliciously indulgent treat of a book. It’s glitzy and gutsy in the best ways, all that sweet, sweet intrigue resting atop some genuinely bittersweet motivations, making all of the characters seem real and relatable.

Well, mostly. It is easy to relate to Avery’s hopeless pining for her crush, but less easy to relate to her life of total privilege, occupying the unbelievably grand top floor of the miles-high skyscraper. Few of us reading this live such lives of overwhelming advantage, and the story enhances the magnitude of that advantage with its 22nd century setting, adding hovercars and anti-grav yoga and a host of other little details to make it feel even more overwhelming–and even further out of reach.

And inhabiting this world of technologically-induced bliss? Teenagers, naturally. Crafted at the genetic level, surgically enhanced, and unfailingly encouraged to craft themselves into the most perfect versions of themselves, these young men and women are disciples of wealth. Wealth, but not ease. They aren’t cyborgs; this isn’t a dystopian commentary on computers (well, maybe a little bit–there is an AI). They have to work to sculpt their bodies, to learn what they need to know, and to stay on the razor-sharp cutting edge of their social world, which exists at the top of the Tower.

Does this seem like a nest of Versace vipers, all feeding off each other’s poison? Well, yes and no. It’s deliciously scandalous and the characters can be vicious, but they’re vicious in the way that teenagers can be, lashing out in part or in whole because they are uncertain about themselves and their place in the world. Moreover, the rich kids aren’t the only ones who have a voice. There’s also Watt–Watzhan Bakradi–the child of immigrants and a genius computer programmer-turned-hacker who lives way down on the lower floors. Below even him is Rylin, a high school dropout who’s trying to support her younger sister and a partying habit in the wake of their mother’s death.

The Tower is New York, what New York has become. Miles high, its base is all of Manhattan and its top is a single suite nestled in the clouds. It’s a very literal interpretation of the economic ladder, with the poorest at the bottom and the wealthiest at the top. But just because it’s basic doesn’t mean it’s obvious or trite. It’s quite clever, and gets all the more interesting when we see how those upper-Tower worlds come crashing into middle- and lower-Tower people who have none of the beautiful advantages of their lofty peers.

But the lower–literally–class characters aren’t apart from the rest of the narrative. They aren’t sainted Lessons to their richer-but-morally-poor neighbors (God how I hate that trope); they aren’t ne’er do wells who deserve their status, either. This is a story that contains privilege but isn’t about privilege. It’s about its characters, plain and simple, and that’s how a good book should be.

The Thousandth Floor has profound compassion for its characters while also not letting them off the hook. Eris is spoiled and self-indulgent and it makes her oblivious to others’ feelings–until a secret undoes her entire life and forces her to start over with everyone she knows. Leda is suffering from the pangs of addiction and heartbreak, but while her secrecy and desperation is understandable, it doesn’t get her a free pass from either the other characters or the narrative. Her brittleness only starts to show more and more cracks, but she doesn’t only expose herself. She’s also trying to expose her best friend-turned-stranger Avery, who is likewise hiding something huge.

Some of the secrets come out and others are buried even deeper by the end, but as we know from the first pages, someone does take a fall, quite literally plunging from the top of the tower. Suicide? Murder? Accident? Read to the end to find out, but there’s still more fallout to be had.

There are other books planned, I believe, and I’m looking forward to them immensely. I do hope that McGee gives a voice to Ming in particular, a side character who seems like a one-dimensional queen-bee wannabe whose gossip-mongering generally only makes people cry. I have faith that McGee could do right by her, hopefully doing even more to advance the complexities of wealth and race she writes about so thoughtfully.