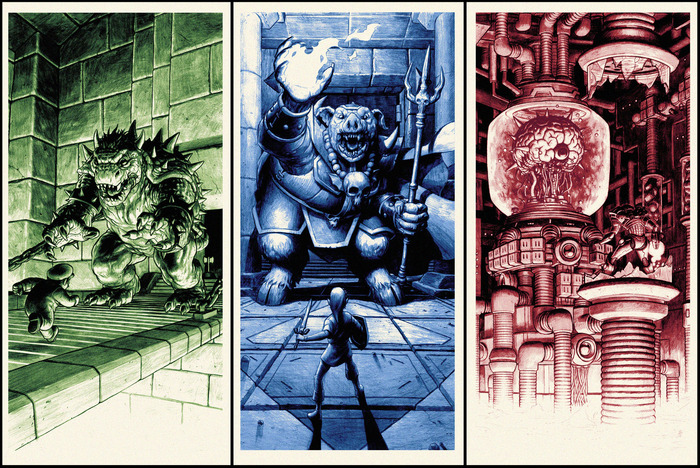 Y’all, check out this amazing project I found on Kickstarter. Austin, TX based artist, Nick Derington is summoning all his nerd powers to craft these gorgeous, video game inspired posters. He has titled his collection, “Boss Fight” because, well  -let’s just let Nick explain it:

This project consists of three illustrations that recreate the nervous excitement that meant reaching a game’s hard earned final moments.  A testament to the hours spent building skills, solving puzzles and defeating all the minions that stood in your way towards the game’s final confrontation. The Boss Fight! A tense and beloved moment shared by everyone who had the determination to see a game to it’s [sic] triumphant, visceral end. Boss Fights were a big deal.  So much larger than what a dozen flickering pixels could ever represent, this art project hopes to interpret and capture that fleeting feeling and make it physical.

Mr. Derington set his original goal at $4,000 and at the time this article is being written he currently has 302 backers contributing $31,582 collectively. There is still time to get in and contribute to make sure you get your paws on some of this great video game art. The Kickstarter ends Tuesday, February 24th.

Will you contribute to the kickstarter? What’s your all-time favorite boss battle? Are there other Kickstarter projects we should know about? Searching for other nerdy things to fund? Check out our Patreon! Comment below or yell at me @patrick_rankin. Until next time, stay Geekly my friends.