While it’s not necessary to read This Raging Light to be drawn into But Then I Came Back, this book is a close companion to Estelle Laure’s debut, although very different in tone. If you’ve read it, you already know what the prologue tells you—that Eden Jones, the cool girl in a cool leather jacket, fell. She fell into a creek after cracking her head on a rock, and then fell into a coma.

In a completely undramatic way, Eden wonders if it wouldn’t be better if she had died that night. Not because she’s terribly depressed (although that’s an undercurrent she refuses to examine) but because the In Between maybe-afterlife of her coma was so blissful. She was free of care, free of the heartache of her failure to impress the Bolshoi dancers on her audition. She didn’t have to cope with her twin brother dating her best friend, or the tragic mess her best friend’s life had become. But mostly, she didn’t have to change. The peace she felt was sufficient to her, and she to it.

But then, as the title says, she came back.

I am extremely skeptical of books that tackle the afterlife. So often it becomes trite or obvious, or becomes some kind of supernatural adventure that isn’t actually about Death—that huge unbearable thing we all have to grapple with—at all. One of the few books I really like that deals with it is the Abhorsen series by Garth Nix, which acknowledges the terrible and frightening aspects of coping with death without succumbing to the temptation to make death itself frightening. But Then I Came Back is the inverse of that, painting death as such a glorious alternative to the messy, unfortunate chaos of life that going on living is the real challenge.

Eden’s recovery is rocky and uninspiring, full of pain and disgusting nutrition shakes. Everyone around her is supportive and grateful for her recovery—and Eden hates it. She doesn’t know why she’s back if her dance career is probably over. What’s her purpose? Why bother being alive if she’s only going to be moody and broken and life on the Other Side is so much better?

She becomes slightly obsessed with the girl in the bed next to hers, another coma patient who hasn’t had the mis/fortune of waking up. Because while Eden has the oft-resented blessing of her friends and family, her mysterious roommate only has Joe, an astonishingly handsome not-brother-not-boyfriend who nonetheless brings her bouquet after bouquet of flowers. 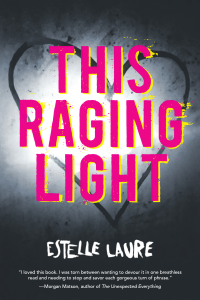 Joe is handsome and might just understand her in a way that her doting family doesn’t. He’s not some stereotypical bad boy or anything. He’s just different. And different is how Eden feels all the time now, so maybe they can help each other understand how to go on living when that coma bed still looms so large in their minds. They try everything from psychics to sky diving, all in the hopes of getting back to the place they used to be. Only–maybe they can’t get there. Or maybe they can get somewhere better.

I wish there had been more interactions between Eden and Lucille. I miss Lucille from the first book, This Raging Light, and I want to know more about how she’s managing. She seems good, but there’s still a lot for her to deal with. Plus, there are few purer moments than the deep and gentle affection that they share. As Eden tries to understand her new self and Joe’s whole situation, it’s clear how precious and amazing this friendship could be, if only Eden would take more time with it. But–and I suppose this is painfully true to life–they each have their own stuff going on, and a lot of it. And it’s just really hard. Growing up and staying connected is really friggin hard.

Laure is no stranger to hardship—This Raging Light ached with it, and now Eden’s story brims over with suffering, too. Laure doesn’t seem to have any blinders on when it comes to the afterlife, complicating it because it seems so good, because it seems so unbelievable. (Believing in the possibility of an afterlife is not a blinder, whatever your religious affiliations or lack thereof. But that’s another discussion I will gladly have in the comments.) She’s also not trying to argue with anyone. She’s just trying to tell this story as fierce and true as she can.

The language is still just so beautiful. Somehow it manages to be both meticulously edited to its most pure state, but also raw and untamed. Reading it, you feel like you have acid in your veins—the corrosive kind, not the hallucinogenic, although a bit of that too—just scouring you down, making you more and more sensitive even as things get more and more painfully intense. It’s gorgeous. Few YA authors can touch Laure for sheer writing skill. As for the psychotropic, well, Eden actually does begin to see black flowers that crowd out her field of vision and weep petals on significant people and things. So it’s a little trippy, but in a way that bolsters the story’s message: that life is frightening and strange and really, really difficult, and near-death even more so, but also kind of amazing.