In an incredibly unlikely turn of events, we have unearthed a cache of historical documents from GeeklyCons long forgotten. We will be releasing them over the next few days as we scan and transcribe them. The first is a letter dated 1783, chronicling the winning of a competition, and existence of something called “House Marewick”. After a quick perusal, many of the documents are related to this tournament and other Geekly factions. The transcription will follow, along with a scan of the original documents.

I write to you with the greatest excitement this third day of September in the year of our Lord, one thousand seven hundred and eighty-three, having just completed the voyage home from GeeklyCon Budapest.

I was saddened to hear that you had fallen ill, as I was looking forward to attending GeeklyCon with you after your many tales of previous exploits and the great merriment you had experienced.

It was quite a relief when I was selected for House Marewick; I was hoping we would become brothers in house and would compete in the tournament side by side. I know it is silly to think, but when I heard you couldn’t make it, I had hoped that you would have written to the selection committee from your convalescent bed to put in a good word for me. It is now my understanding that you aren’t selected by some mortal man, but it is by the very essence of your soul that you are judged and sorted.

Enough preamble, on to my tale! It was an amazing weekend as you prognosticated, and who would take home the banner came down to our own House Marewick, and a dark-hearted sect who I shall not mention by name. I, myself was chosen as house champion for the final task, and after holding mine breath for 4 and 200 seconds, I was deemed victor, bringing home the banner for the entire house! That night, the revelry reached heights I had not imagined, and woe was my head on the next morn.

The brief day’s pain was all worth it, considering the great joy it brought me. I feel like I have become part of history and done something greater than myself. Please write back with tidings of better health, for it would be unjust for us to not attend the next GeeklyCon as brothers in house.

P.s. Rumour has is the next year GeeklyCon will be held in Amsterdam! 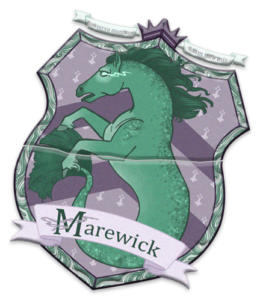 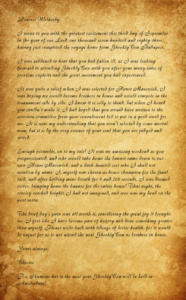