Scarlett and her sister Tella live on a conquered and colonized isle under the iron fist of its governor, their father Marcello Dragna. The governor is a brutal man, but Scarlett has a glimmer of hope. She—and by extension her sister—will soon escape, thanks to a marriage her father has arranged for her.

And yes, her life really is that bad, that an arranged marriage (in a YA book!) is preferable. Garber deploys some heavy physical and psychological abuse early on to make sure we know that Scarlett is in desperate earnest–and that her sister is equally desperate, albeit with very different plans. The sisters couldn’t be more different, but their love is fiercely evident. Tella wants to save Scarlett as much as Scarlett wants to save Tella, but Tella is by far the cannier of the two, and tricks Scarlett into accepting passage to Caraval.

Caraval—the carnival so grand it encompasses its own private island, and so mysterious that its master is known only as “Legend.” Scarlett had long since put her desire for safety above her desire to attend, but now she’s going, and luck us, we’re along for the ride. 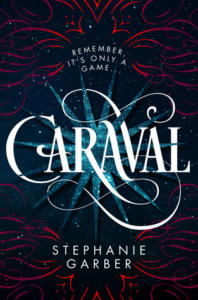 By far and away the best part of this book were the descriptions. They were absolutely scrumptious. Rum-butter clouds and sugar beaches–it was like stumbling into the grown-up version of Candyland. Or—sometimes—the witch’s gingerbread house. But bitter or sweet, the atmosphere was undeniably incredible, and not just for your tastebuds. The entire book was practically lit from within with all the glittering, glowing colors; the perfume and spice was heady; the music echoed and the textures were luxuriant. For black words on white paper, this book was a riot and a feast.

It was also a pretty intoxicating mystery. The “game” mentioned on the front, ostensibly a scavenger hunt of sorts to find the prize at the end, was just as much an extended bait and switch, constantly trying to undermine and confound your expectations. Scarlett thinks she’s going to the island to find a wish, but the wish becomes her missing sister becomes her freedom becomes love–and then around again. It’s a carnival much like The Night Circus by Erin Morgenstern, except Scarlett isn’t in on the rules, and her competitor–the mysterious Legend–wrote them. Legend has all the power, and browbeaten Scarlett has none. At first.

Garber’s mysteries became a little too mysterious–and serious–as time went on, though. It’s perfectly reasonable to juxtapose the absurd and the painful, or use one to draw out the other, but here the two seemed to run parallel and compete for our attention. Scarlett’s horribly abusive father threatens her–but is he really there? Her sister needs her help–or does she? Some of the emotional elements are undercut by this uncertainty.

We have no relief from that uncertainty, either. The one person we might believe as far as rules go–Legend–is never indisputably present, and so the tenets of his game (the bedrock of the story) are in flux. Our main character, Scarlett, is likewise persistently uncertain. Her naivety and timidity were consistent with her background and remain good instances of characterization; however, her nervousness and unwillingness to interrogate herself or her surroundings made everything feel anchorless. In a book like this, we need a main character who will provide us some relief from either the madness or from our own rationality. Someone who will embrace the game and play along (and turn it to their advantage in the end), or someone who will impose order on the chaos and lead us safely to the answer. Scarlett hesitates somewhere in between, never really getting in the hang of the bargaining and sneaking, but never really convincing us she’s on the right track to figure out the secrets around her either. There’s so much uncertainty that even the clues she thinks she’s found are significantly in doubt.

Now, I understand that this book is an emotional journey for one young women who needs to becomes more active in her own life, and throw off the passivity her abusive father demands. That’s a great story to tell. And the book almost convinces me that the answers Scarlett finds are the right ones. Certainly they’re the right ones for her, and lead her to an emotionally satisfying conclusion. But are they the right ones for the game? Because it’s the game at the end that doesn’t feel quite won or quite lost, or even outwitted.

At least until the epilogue. It is my most sincere hope that Caraval gets a sequel (and with all the hype I can’t imagine that sales will suggest otherwise) to give us another shot at this convoluted paradise, this time through another’s eyes. Until then, my take may be somewhat controversial–comments and theories always welcome.