Tim and I had the chance to try out Momentum Volsk’s Castle Assault at PAX East 2016 and decided to commemorate the occasion by doing our very first conversation style article! Maybe we can make this more of a thing in the future?? Gotta use our ridiculous Gchat conversations somehow! 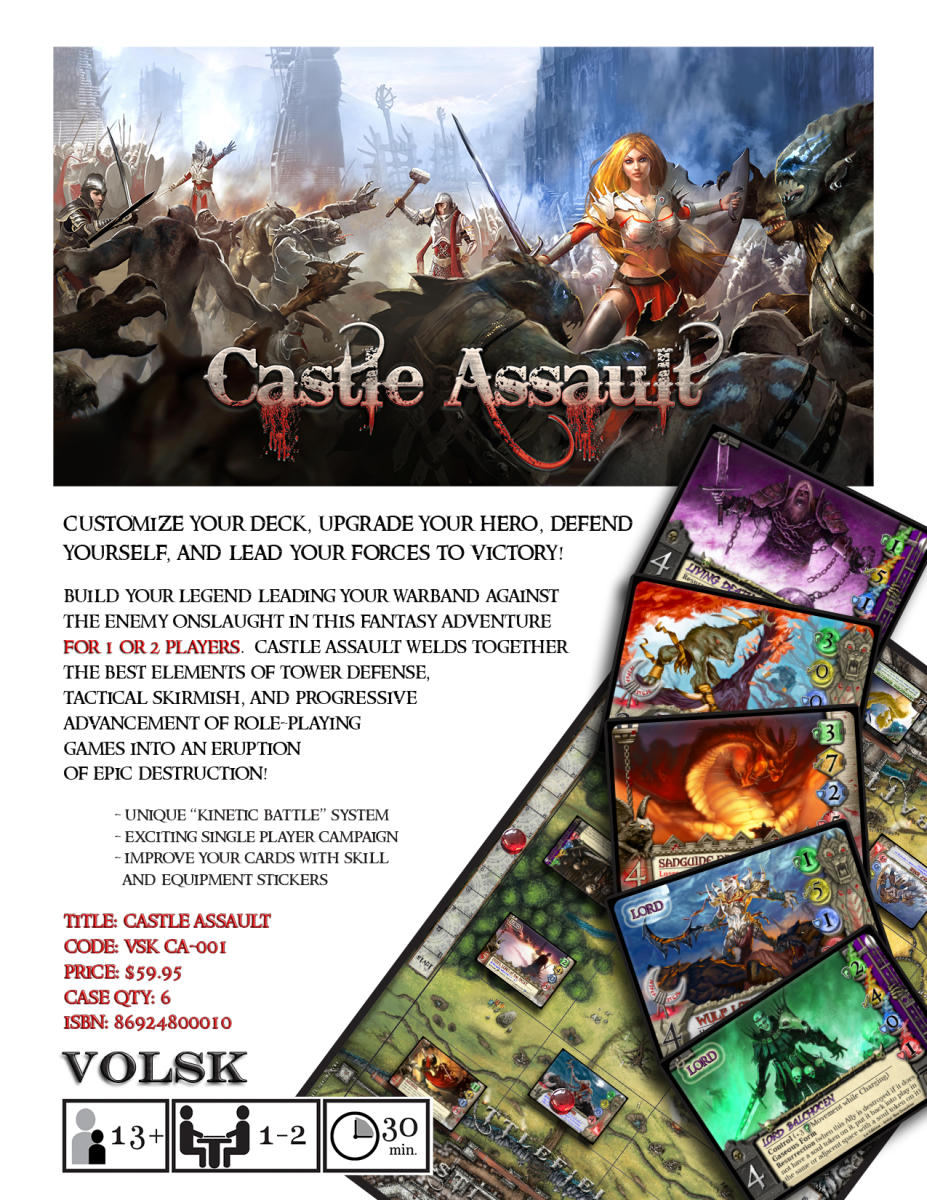 Jennifer: Tim! What were your overall feelings on Castle Assault?

Tim: Wow, getting right to the meat of the dang thing. I respect that. On the whole, I liked Castle Assault. The most basic thing I could say is that it is different. Meaning, even if the game wasn’t good or fun I would still like it since it is a unique thing. Fortunately, the game is good!

J: Yea! I’m always a fan of deck-building games, and this one added some some fun elements that felt different from the games I’m used to in this genre. I liked that there was an actual castle and battlefield involved in the game strategy.

T: Right, many CCGs don’t really have boards, so actually having an illustrated battlefield was a nice touch. It helped keep everything straight as we played. Let’s give a quick overview of Castle Assault shall we?

Castle Assault is a 1-2 player CCG made by Momentum Volsk. Each player picks a Warband and battles their opponent head to head in an attempt to destroy each other’s castles. If you get your monsters to your opponent’s castle – BOOM – you do damage to your sworn enemy’s headquarters. If they take too much damage, they lose.

J: There’s also single-player mode where you can play against a big bad boss! The general mechanics are the same, but it’s nice to have this option even if you don’t have a friend (or foe) available to rumble.

T: Very true. Mechanically, Castle Assault works a little bit like Magic: The Gathering mixed with Clash Royale. You can only place your units in specific lanes on the board and they charge down the battlefield attempting to assault the castle on the other side. But, the twists that are added are real neat. The one that really stuck with me was how you gained “mana” (it isn’t called mana) that you use to summon units and to cast skills. Instead of putting resources in your deck to be randomly drawn and played, you “sacrifice” a card in your hand to become a part of a resource pool that you use throughout the rest of the game. It is a cool mechanic that keeps the game moving and avoids every CCG player’s fear – not having any options to do anything and stalling.

J: Having to decide which of your playable cards to sacrifice to the Resource God is one of many strategic decisions that you’ll need to make as you play the game. Another aspect of Castle Assault that I enjoyed was the way card movement is handled. Once you “ready” a card on the battlefield, in most cases, that unit will keep moving whether you want it to or not! Which is just one more thing to keep in mind as you place your units and get them ready to fight.

T: This was really interesting for my Undead Horde. It felt like a slow creeping march of zombies swarming their way to Jennifer’s Castle. Plus, being undead and all, I could set up much slower creatures who could reanimate my dead zombie soldiers. 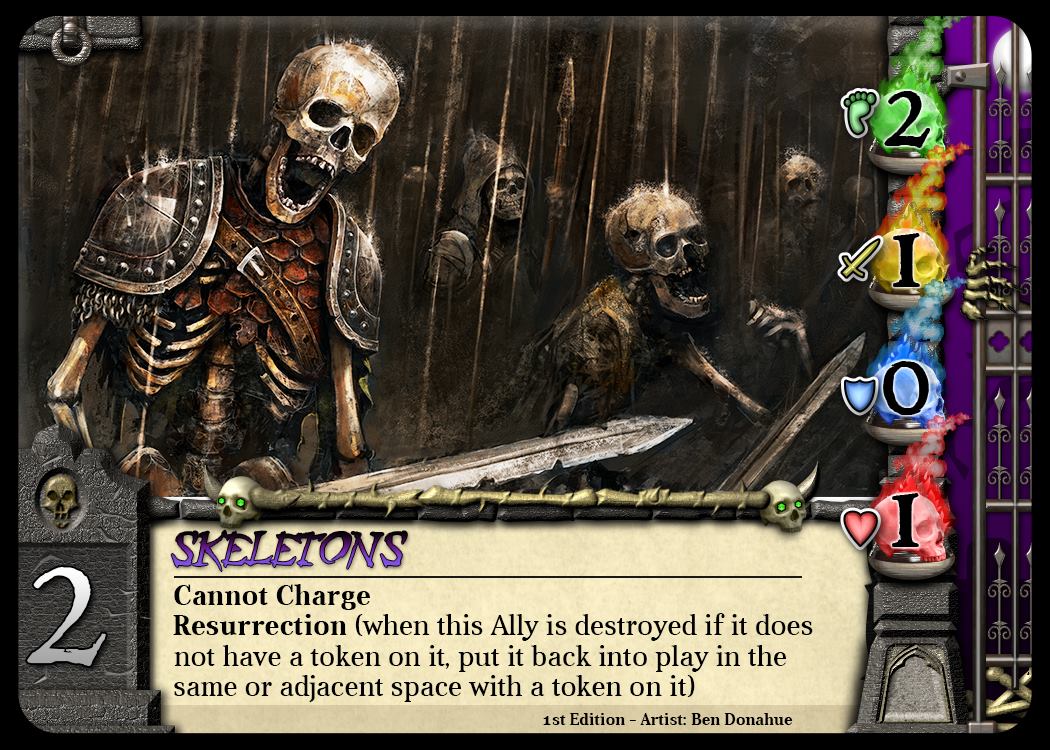 J: I played with a crowd of Rowdy Werewolves, and early on in the game it looked like I was going to easily kick some Undead Ass! The Werewolves were great at charging up the battlefield, and I thought that Tim’s puny skeleton men didn’t stand a chance against my lupine pals. Turns out that for our game, slow and steady undead was the way to go??

T: Yeah, I was real annoying and it was fun.

J: I kept killing his dudes but they kept coming back, which is very rude in my opinion!! No one invited you to the Castle Assault party twice, Mr. Skeleton. How about you go and read some Miss Manners.

T: You could tell by the card art that my undead-boy-crew was really into being rude and stinky. Which is another rad thing about Castle Assault – all of the art is unique and each faction has a different thematic tone. We didn’t play as the humans, but many of them appeared to be anime.

J: Damn, maybe I should have played as the humans?? I could have been a beautiful anime crossbowoman. I did love my Wolf Crew though. I had a card that was a stupid dying moose that you could put on the battlefield to summon a more powerful Werewolf later, which was hilarious.

T: Some of the cards we got initially made us think “Heck, this is just for the Resource God, right? Look at it? I hate it!” Then we would formulate a plan around that specific card later. I won because I had all these small cards that made each of my attacks do a little bit more. Plus, I had a positive outlook and I just knew that the Black Vigil was more deserving than the Lunar Hunt.

J: I had a cool Lord Werewolf that had the ability to change lanes, and I was totally going to use that to destroy Tim’s castle, but alas, it was not to be. 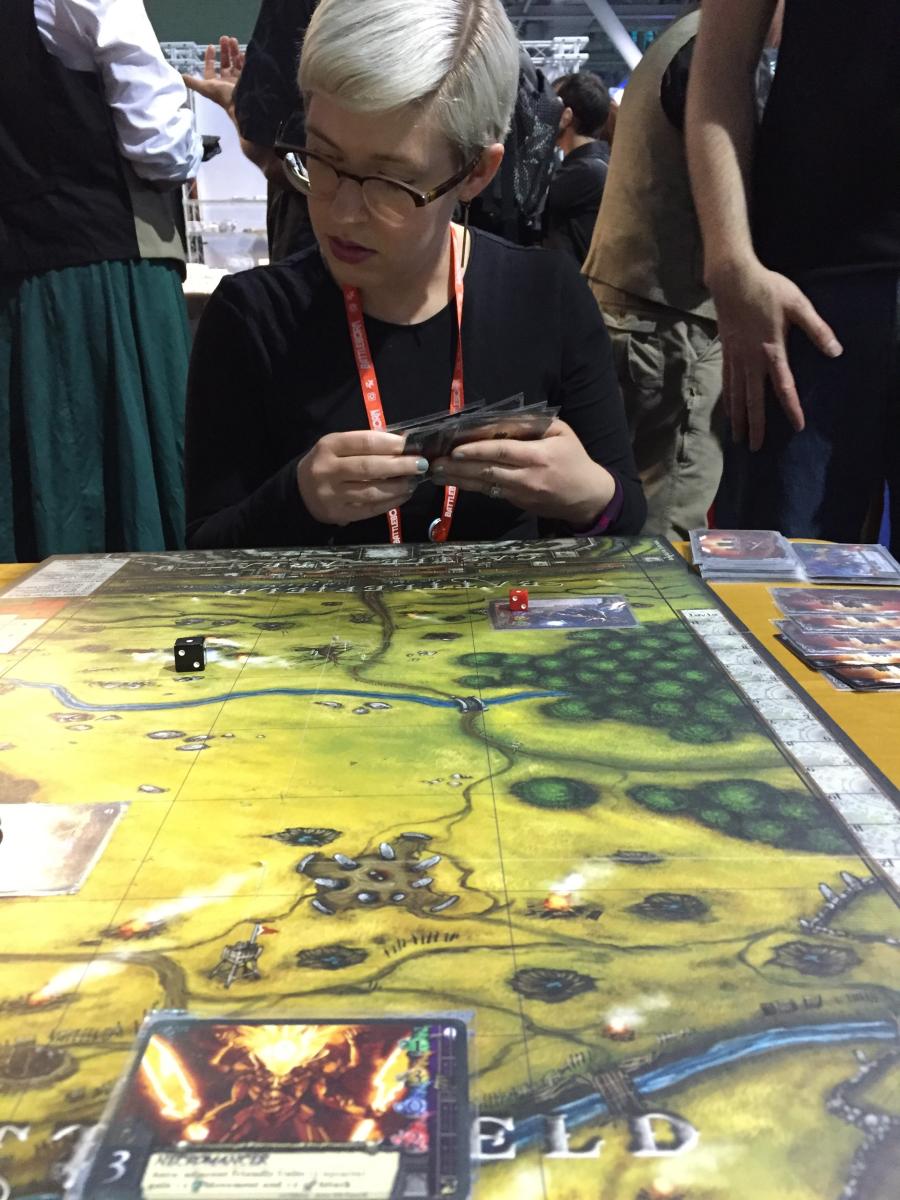 T: Mechanically I won by simply overwhelming Jennifer’s Werewolves. Sure, her units each did tons of damage and moved fast, but my little skelingtons could reanimate. Then I placed these weird necromancers who made everyone else stronger or even reanimated them for a second time. Then I played a ghost thing that could pass right through every unit. So, Jennifer was set to win but in a moment of bravery and tenacity I won.

J: I hate you for this. My Werewolves were Good Boys and would be better at ruling castles than a bunch of dusty skeletons.

T: Jennifer, would you buy  Castle Assault, and for who?

J: I would definitely buy this game! If you are a person who wants to up their arsenal of 2-person games, then this is a great choice. I would also say it is a good game for people who love deck-building games like Dominion, and want to dip their toes into beefier CCGs like Magic.

T: Agreed! We only played it once, and our friends were giving us stink eye because they wanted to leave PAX to get lobster rolls, but despite this I have overall positive feelings. Who knows how balanced each faction is or if the depth is there. I do crave good 2 player games and from what I can tell Castle Assault would fit right into our ever-expanding board game collection.

J: It also seems like a game that has good expansion potential (new factions and bosses??), and I love a good board game expansion.

T: Yep, and out of the box there seems to be lots of replayability and customization. There are six warbands and a set of neutral cards that can be added to any warband to match your play style.

J: Overall I really enjoyed our playthrough and would be excited to play more than just the Werewolf vs. Skeleton showdown!