I’m guessing that the pitch for Catfish Lullaby, by A. C. Wise, was: imagine True Detective season one from the perspective of women and queer people of color. That’s certainly an intriguing premise as well as a welcome one, and I already know Wise is an exceptionally good writer from her short stories. Her work here is no different, evocative without any belaboring, and smart without being stuffy. Even though she stumbled with other aspects of the medium-length format, the novella is still a worthy read to get a few summertime chills.

Wise’s skill with characterization really shines in Caleb, the protagonist whose three experiences with the monster known as Catfish John shape his young, teenage, and adult life. Catfish John, the maybe-monster who hides in the swamp to either help or harm interlopers (especially young women), is little more than a legend at first. But as Caleb has repeated encounters with a less mythical—but no less monstrous—local family, Catfish John seems like as good an explanation as any for the strangeness. 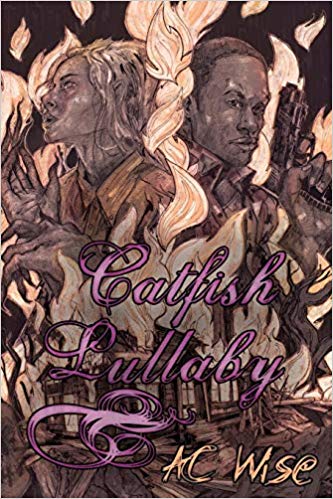 Equally strange is Cere, a daughter of the Royce family and unwilling heir to some of its worst powers. She might have to have an uncanny connection to the swamps and special powers—or she might just be a traumatized little girl. Caleb isn’t sure which, but he knows there’s more going on with her than everyone is saying. And he knows it has something to do with Catfish John, who Cere alludes to but can’t really talk about.

I love the little girl + monster trope. Catfish Lullaby had the beginnings of that, but didn’t fully explore what Cere’s relationship was with Catfish John. Again, the lack of detail really undercut what could have been an absolutely fascinating dynamic, and something that could have given us more about Cere. As it is, Cere sometimes veers off into the horror stereotype of the little girl—you know, the creepy pale one who doesn’t really talk so much as issue pronouncements. Cere also has a tendency to speak in horror movie taglines, “I was born to end the world” and so on. Cere is best when interacting with other characters, showing her vulnerability alongside her bravery. That’s when she has real pathos and heart.

In its broad strokes, the plot is solid. Unfortunately, it probably should have been a novel rather than a novella. We get snapshots of the town of Lewis and its inhabitants, which live in an uneasy détente with the nearby swamp. As is inevitable in Southern Gothic, there’s a small town, a preacher, devilry, and a ton of racism. The racism is definitely clear and present. But the preacher doesn’t really preach, the devilry never really seems that evil, and the town doesn’t feel as suffocating as it could. It’s not even all that isolated in the fens: for all the talk of swamps and catfish, it only ever takes place on solid ground.

Evil solid ground, to be fair. Occupied by generations of an evil family, who seemingly commit torture, kidnapping, rape, and murder without anyone in the town doing anything. This, to me, is the true terror of small towns: people who look after their own far more zealously than they look after the common good.

I like small town horror. I also like action-horror, cosmic horror, action, and straight-up fantasy. The mesh of all of them in such a short novella, though, wants to be genre-defying, but ends up more genre-muddling. The Lovecraftian turns of phrase—references to strange stars, incomprehensible entities, and gruesome rituals—had me believing that this would be like early Caitlin R. Kiernan, but then the payoff was far more straightforward. None of the protagonists or bystanders went mad, and there was far more action than investigation or creeping dread. We know almost from the very beginning that, regardless of Catfish John’s nature and motives, there are some real monsters in the Royce house.

I can certainly appreciate Wise’s argument that true monsters are human. My problem is the context. The central feature of Lovecraftian fiction is that the monsters and non-human forces are indifferent. The drama and terror come from scale (pun sorta intended). In Catfish Lullaby the scale is just as big, but all the forces involved really care about humanity and human power. It’s not necessarily a negative, but it does take away from that sense of sublime horror (and is a bit distracting for cosmic horror fans), a sense that can’t be replaced even by the most mysterious of mysteries.

It seems like Wise withheld a lot of critical information in the interest of creating mystery and suspense. The Royce family wants to destroy what they think is evil, and in so doing become evil themselves. Sure, I dig it, but there really needed to be more backstory on why a family of preachers would become so obsessed with their quest that they commit unspeakable acts. It’s not that it’s entirely unrealistic, but it does require more justification than “religious people be crazy.” Even the most fervent zealots have their reasons.

I really hope that we get some of these answers in future works from Wise. There are solid foundations here (well—figuratively) for more Southern or Swamp Gothic, and the characters and monsters have enormous potential. Some of that potential is already apparent in Catfish Lullaby, which would make a great weekend read or engrossing escape from an airplane trip. But some of it, I suspect, is still lurking beneath the surface.