Please note that this review contains spoilers for the His Fair Assassin trilogy by Robin LaFevers. Courting Darkness is an immediate followup to the trilogy, beginning only a few days after the end of Mortal Heart.

Sybella was my favorite of the three protagonists from the His Fair Assassin trilogy, and I’m thrilled to see her story continue in Courting Darkness. The other two protagonists, Ismae and Annith, also show up, but they have taken on other roles that do not keep them as close to the action. The plentiful action, as it turns out, since the end of a war does not mean the end of hostilities. Sybella knows all too well that violence lingers, since her past is shadowed with some truly horrible events. But as Dark Triumph showed, and Courting Darkness continues to elaborate upon, she has an enormous capacity for love and a burning desire for redemption. 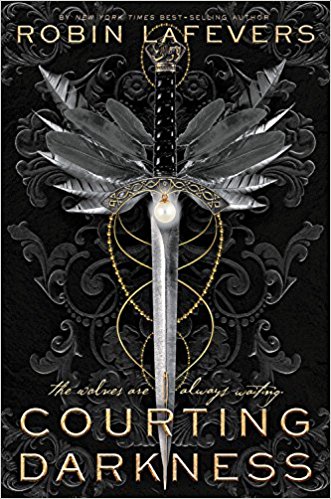 Now Sybella is on her way to the French court to protect the duchess of Brittany—soon to be queen of France—from further threats. All kinds of new danger crops up, from mercenary attacks to the machinations of the French regent, an odious woman unwilling to let go of her power. There are also less immediate threats from the political landscape of fifteenth-century Europe, and LaFevers does her usual excellent work in summing them up and making them accessible. Even though I had forgotten all the finer points of the political situation, LaFevers made it possible to jump right back in with a minimum of confusion.

In terms of its theme, it reminds me of City of Blades by Robert Jackson Bennett, which also grapples with the implications of a world in which the gods are absent and the afterlife is no longer certain. Courting Darkness is on a much more intimate scale, however, since both Genevieve and Sybella are literal daughters of Mortain. Now that their god is mortal, how do these two priestesses re-align their universe? Sybella in particular is tormented by her newly uncertain place in the grand scheme of things, since she spent much of her first book struggling to find that place for herself.

But there is limited time to pursue philosophical ends, since not only are there assassins to thwart, but also a whole court to deceive. Brittany placed the veneer of Catholicism over its pagan beliefs, calling the gods “saints,” and generally ensuring peaceful coexistence. France, however, has no such tacit understanding, and would destroy whatever heresy it found. Sybella, therefore, must be more cautious and subtle than ever before—two things she finds increasingly difficult, as many of the French nobles she encounters are in desperate need of a few stab wounds.

Sybella hopes to find the two deep cover agents placed in the French courts years ago to aid her in her defense, but the girls are not easily found. Genevieve and Margot were sent away at only twelve years old, and have had no contact from Mortain’s convent since then. If they are even still alive, are they in any shape to help?

It turns out the Genevieve, at least, is ready and willing to serve—more than willing. For five long years she has waited for the signal from the covenant, and her restlessness has led her to keep dangerous company. Genevieve is an interesting enough character, but she mostly reacts against things, and it’s a little hard to get a handle on her personality, even though she is, like all of Mortain’s daughters, smart and deadly.

Though there is plenty of action and intrigue to keep each chapter fresh, the overall structure of the plot lags a little on Genevieve’s end. It is much longer than expected before we see her even begin to meet up with Sybella, and her preparations, while reasonable, are belabored. Her suspicious nature may be warranted, but perhaps not to the degree she pursues it, especially when we can tell—by conventions of plot and stipulations of YA romance—that it will not be remotely successful in some areas.

Sybella and Beast’s romance, though stuffed into stolen midnight moments, is far more satisfying, since it is established enough for emotional intimacy and humor. The two really bring out new aspects of each other’s personalities, and it’s a welcome dimension to a book fraught with otherwise tense relationships.

When Genevieve and Sybella’s paths finally do cross, it comes on the heels of a miscalculation on Genevieve’s part, one so glaring that it made me sigh with frustration. There are mistakes characters make, and then there are mistakes characters are forced to make because the plot needs additional drama–or, in this case, a painful cliffhanger. I dislike cliffhangers because they’re usually a crutch. Publishers think you won’t buy the next book unless you’re trying to relieve agonies of unknowning, but for interesting characters and good writing, I’d basically show up to watch them make soup and sing their to-do lists. Robin LaFevers has those characters and that writing. (Sybella’s to-do list would be full of murder, but my point remains (heh).) She spent most of Courting Darkness describing historical realities, which are not the same as literary conventions. There was no single driving plot element, so establishing one in the last fifteen pages was a bit irritating.

Even so, I can’t ding a 500+ page book too much for a final stumble. I’m sure it will be satisfactorily resolved in the next book. I’m sure I will enjoy spending time with Sybella, Beast, the Duchess, Genevieve, and so many more when the duology is complete in 2020. Just as I am sure that this was a thrilling, fascinating read that is definitely worth your time. 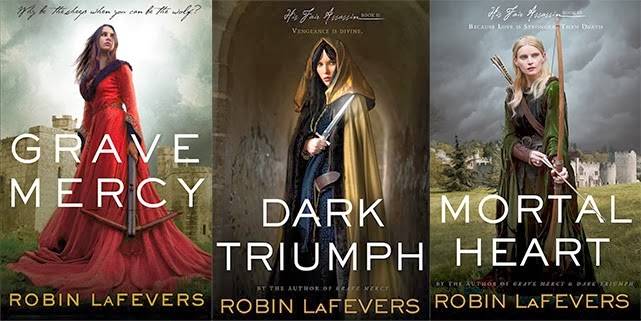