At some point we have all felt the frustration of losing a game and wanting to just knock all the pieces off the board. Not all of us? Okay, well I have at least, so when I got to play Cube Quest: Clash for the Crown at PAX East this year, I knew it was going to be a new favourite game of mine. Cube Quest is a great and fast two player game where each player gets 40 points worth of an army, and the player who gets either all the other player’s army off the mat or knocks off the other player’s king wins. 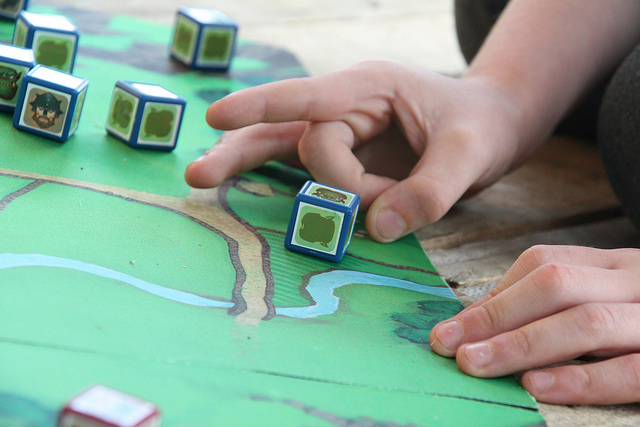 This is me right before I flick that cube halfway across the house.

The game comes with two foam mats that act as your “board” for the game, each one with a castle and nice scenic setting; two colours for the kingdoms (blue and red), and 25 cubes that the player can use to make up their army. Each cube has a different type of minion, one for the King, two Healers (which can bring back 6 points of an army), 2 Helms (that can be flicked twice), 2 Skulkers (that disappear after being flicked on to the other player’s side and can be reused), 2 Freezes (which stop another player from moving any cubes it is touching), 4 strikers (which are the hardest to “capture”), and 12 grunts (basically the infantry/frontline troops). All of the pieces have a designated value, and the game starts with both players assembling their troops from 40 points of available cubes.  Then each player sets up their army in whatever fashion they want- this is where the strategy comes in as you have to defend the castle and keep the king alive. I typically go for a clustered “wall of force” approach or the “mighty V”  (but then again I typically lose…so you might not want to try that). 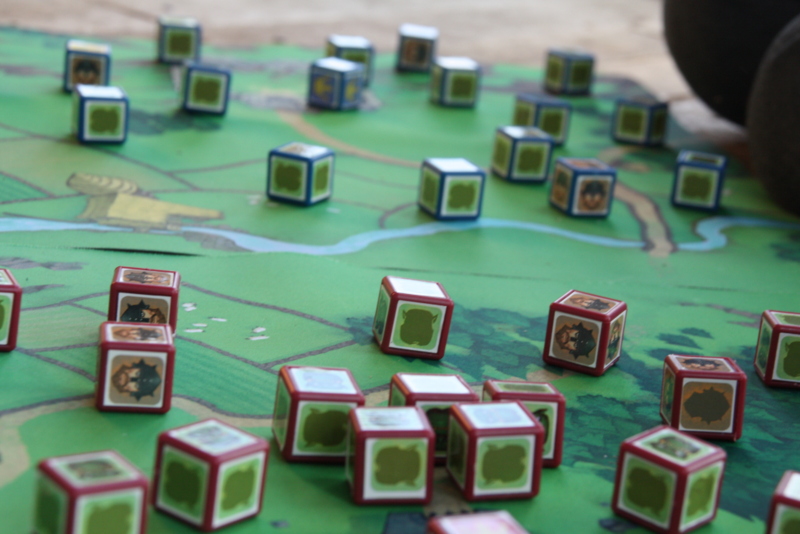 My strategy: scatter patterned, so many you can’t focus on one.

A basic turn consists of choosing one cube to flick across the mat in the hopes of knocking the other player’s cubes (and ultimately the king) off the mat. When a cube is flicked to the opponent’s side, there is a chance that even if it is on the mat, it can still become “captured” and taken out of play. If a cube lands with a blank side up (all cubes have at least one blank side), then the player who flicked it must take it and roll the cube. If the cube lands after the roll with the face up, then the cube remains in play and is taken back to the castle. However, if the cube lands with the blank side up again it is removed from play. If the cube is flicked to the opponent’s side and it falls with a face side up, it remains where it landed and stays in play.

Overall, this is a great game because everyone can learn how to play and pretty much anybody can play. It is really fast to play with the average game taking about 15 minutes, and so far it has entertained everyone I know who has played. There are expansions you can get to include more players, but for me this is a perfect two person game that, for being so simple, can bring you hours of entertainment. I would definitely recommend this game to not only board game veterans, but also people who are just starting to get into board games. So grab Cube Quest, form your army, and flick your way to victory!

Find Cube Quest: Clash for the Crown on Amazon