What a ride it’s been! We went from Murder Hogwarts to Magic Spartacus to this, a dark, Tolkienian triumph I’m going to dub Return of the Goth. Surprised? Me too. But we shouldn’t be. Jay Kristoff may write with some pop turns of phrase (and filthy cussing), but his ambitions have always been Epic with a capital E. And what’s more epic than a reluctant underdog come at last to claim a crown? 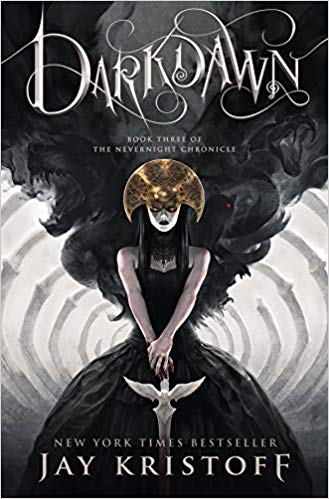 Or so she thinks, anyway. Certainly her quest for vengeance against the three men who killed her parents has been her reason for getting up every time she gets knocked down. But the powers that be have other ideas about what should be taking up her time. The gods have their own family issues to attend to, and just like Mia, they don’t like being told no.

Kristoff does an admirable job of aligning the divine and mortal struggles, centering them on the questions and obligations of family. Who is your family? What do you have to do for them, and what do they have to do for you? These questions become even more complicated in Darkdawn thanks to several revelations both mortal and divine (Return of the King isn’t the only Return relevant here). And the answer is not always “stab.”

Don’t get me wrong, this book is even bloodier and murder-ier than the last. Mia at one point takes a slight detour to become a pirate queen (yes, really), destroy an entire legion, and infiltrate the Red Church. Our little murder baby is all grown up and going after corrupt institutions! But just as Mia rediscovered her heart in Godsgrave, she now has to rediscover her soul. Is her vengeance as important as it once was? Is it justified, now that she understands more about how the world works? And if she survives, will it mean anything for it to be finished? Vengeance looks a lot different after all the things she’s learned and done. After the events of the second book, she thought for a moment that she was finished, and that she might have a chance to discover life beyond her murderous quest. This dangling promise, so quickly snatched away, nevertheless opened doors she had never intended to open. What might her life be, and not the life her honor and family demanded of her?

The events of the book strip away not only her surety in the rightness of her cause, but also her hope and her fearlessness. Deprived of the things that previously drove and defined her, Mia finds new depths to herself—and yes, new depths to her own darkness—that left me quite impressed. It’s not just Return of the King, it’s also Thor: Ragnarok. Deprived of the outward qualities of (anti-)heroism, the protagonist must finally look inward to their core and see what they really want and if they really have what it takes.

Kristoff knows how to escalate tensions with every chapter and every revelation. It’s a lush gothic paradise of a book, full of blood and skulls and shadows. Not since Neil Gaiman’s Sandman have we had a pantheon of characters who so boldly embody Dreams and Death and Shadow and Night. Kristoff doesn’t try to tamp them down into realism, and rightly so. The action is cinematic and the scope is mythic. The characters must be on equal footing with the setting, and Kristoff doesn’t disappoint. Jay Kristoff has always been one of those writers whose modus operandi is to figure out the most badass thing for a character to do in any given situation, and then have them do that thing. Rinse. Repeat. And in Darkdawn, this is true not only of swordfights but of “define the relationship” chats, which is equally impressive, let me tell you. 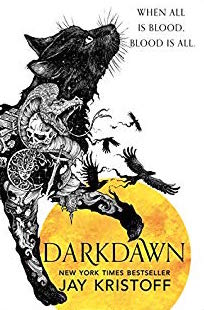 The romance is pitch perfect, the masculinity is non-toxic (for most of the good guys, anyway), and the character development is so much deeper than I expected. Not just Mia’s development, but Ashlinn and Mercurio and others, too. Their progress over the course of their books leads to some compelling drama, the kind that arises from sympathetic characters with mutually exclusive needs and desires. The book is absolutely soaked in tragedy and triumph. And humor, fortunately, or I might have gone mad with the tension of it.

My favorite bit involved a librarian and some bookish humor, naturally. A lot of authors like to do that thing where they say a character has written the book, and therefore that the book exists in-world. Mostly I think this is cute, if a little trite and generally unimportant. Kristoff has been doing this throughout, although his narrator was a lot more present, interjecting and explaining all over the place. I enjoyed it (so sue me, I like snarky footnotes), but I should have known Kristoff doesn’t do anything by halves.

He made the Nevernight Chronicles themselves intrinsic to the whole plot. As in, a major plot point centers on their existence in-world.

It takes some serious stones to pull something that meta, and though it was a bit distracting at first, he did convince me that it was more than a self-indulgent gimmick. It actually worked, and managed furthermore to work in some characters in unexpected ways. And if he got in a few jabs in about the importance of stories and writing, well, I don’t love it when the book I am currently reading feels the need to justify its own existence (I bought it, didn’t I?), but at least it was better than that “hey look it’s A SoNG of ICe anD FIrE” in the Game of Thrones finale.

Darkdawn’s ending might also make you scream and brandish your book menacingly, but only in a good way. No spoilers for the ending, but given the end of other series recently, I must assure you that the Nevernight Chronicles ends with the promised bang and not a whimper. (Well, technically it ends with lots of bangs, both literal and metaphorical, and quite a lot of whimpers, but you get my meaning.) Kristoff has said he doesn’t believe in happy endings. But Dawkdawn ends like the shadow cast by one: the same shape, but not bright and shiny, only dark and deep.