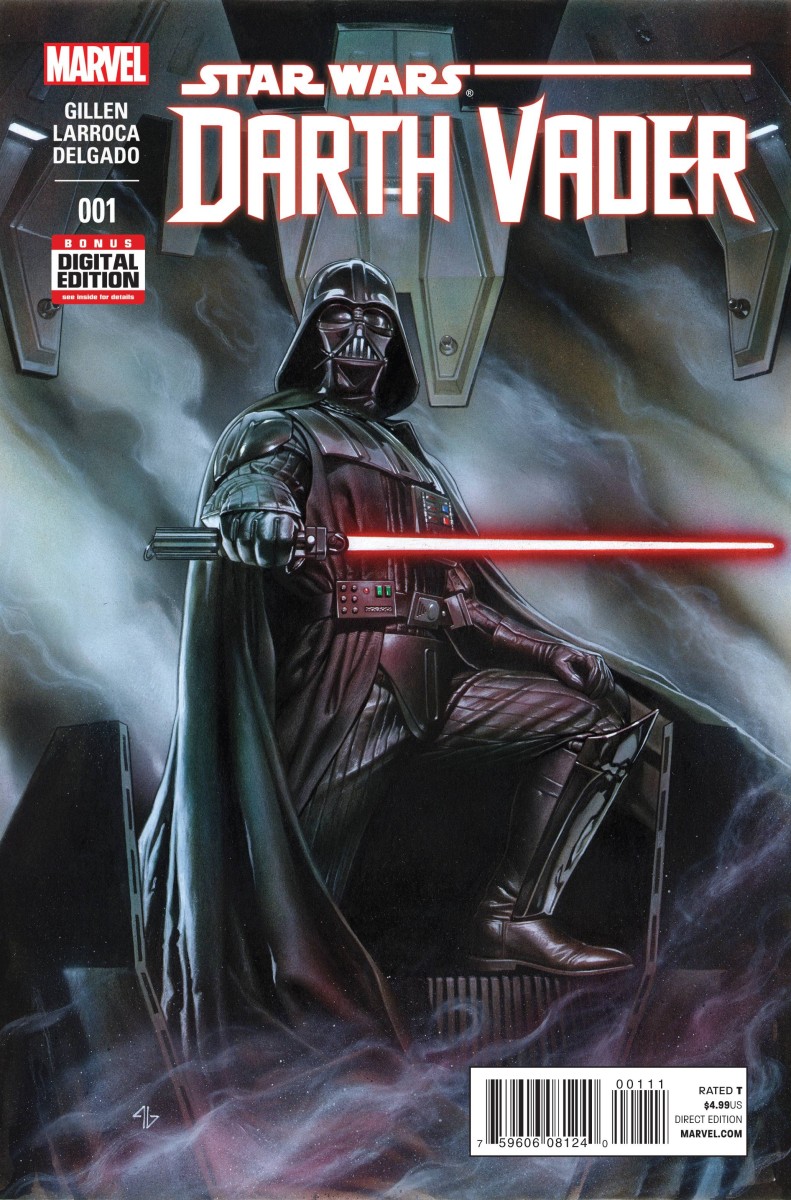 Marvel has recently regained the rights to publish Star Wars comics and they have hit the ground running. The first two issues of their flag ship book for this series, aptly titled “Star Wars” has been a treat. Canonically, these books take place after A New Hope but before Empire Strikes Back. This means the death star is gone but things haven’t gone to hell for the rebellion yet. This week, we get a taste of what Marvel plans to do with side books with Star Wars; Darth Vader being writtin by Kieron Gillen with art by Salvador Larroca. It picks up after the events of issue #2 of the new Star Wars comic. Vader has been attacked by the rebels (Han, Luke and Leia) and is reporting back in with emperor Palpatine.

First thing to say is this book looks great. The interiors are done by Larroca on pencils and Edgar Delgado on colors with the cover being done by Adi Granov. The cover has such an ominous feel to it, with Vader emerging from his meditation pod, smoke billowing around him. I like the touch of giving him an elevated position so it appears he is looking down his nose (helmet?) at you. It really invokes a feeling of superiority from Vader and makes him seem like that much more of a bad ass. Inside, the book continues to convey Vader’s presence on ever panel he occupies. From the first few pages of action where Vader slays some fools, to when he has to play politics with the emperor, I could always feel what Vader was thinking. This is quite a feat for Larroca as Vader’s helmet doesn’t give much away in terms of emotion but it absolutely comes through in spades. I also have to bring up Delgado’s color work. He nails the shiny quality of Vader’s gear on every panel without it looking like he just waxed his helmet. There is also a scene that takes place in a room with a giant window where the sun is setting. The lighting he does throughout this exchange between Vader and Palpatine is gorgeous and sinister all at once. Love it.

The story is also quite good. Kieron Gillen is no stranger to fantastic story telling and I feel like he’s going to have quite a bit of fun with this book. Make no mistake, not only is Gillen going to explore the dark side of the force, but also the dark parts of the universe. This is made quite clear by the first and last scenes of the book. The last being the most hype-inducing pages for any Star Wars fan. You might think that Gillen would throw in some parts to make Vader more of a hero type, harking back to his days as Anakin, so the reader can feel like maybe we will see his redemption through this series. I am pleased to say that, so far, that is no where near the case. Vader is an out and out villain who takes brutal measures to achieve what he wants, and that is what is going to make this book fun; watching our ‘protagonist’ be downright despicable.

This book is an absolute must own for any Star Wars fan. If you haven’t seen the original trilogy yet (who are you?!) then you will be lost, but if you like good storytelling and art then you will still enjoy this romp through the dark side.