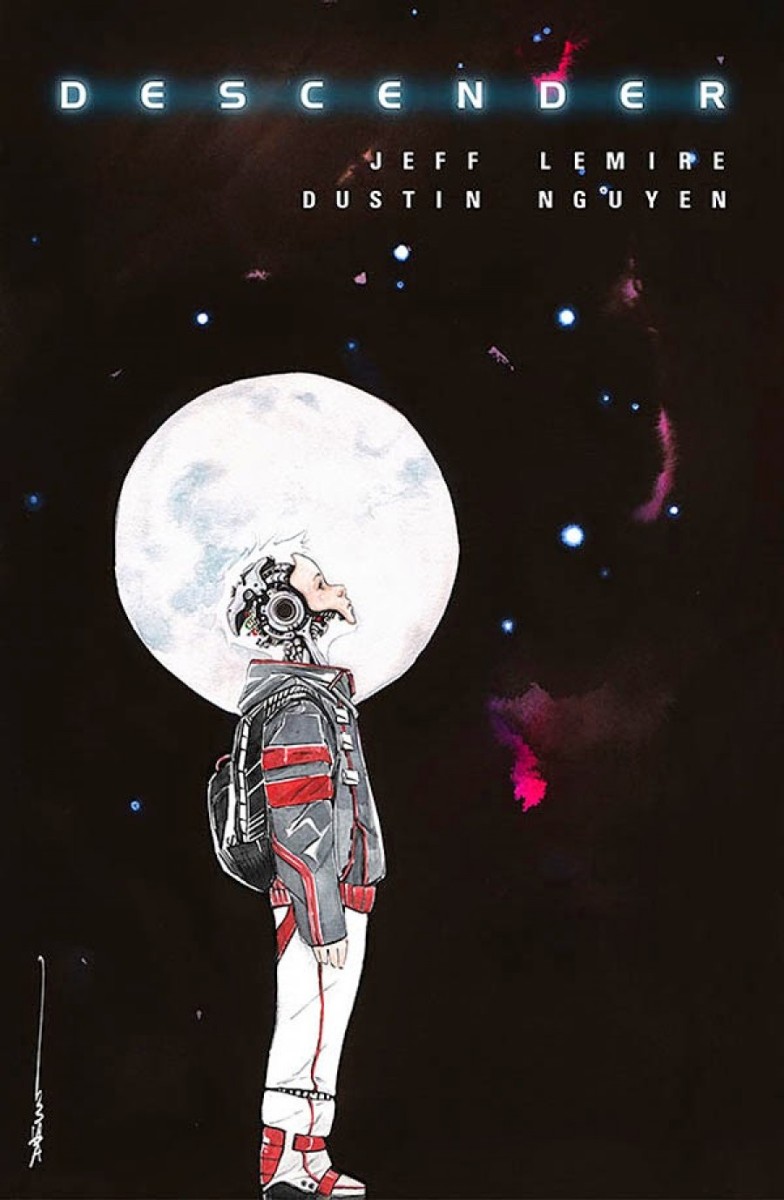 Descender is a sci-fi story set in a completely original universe. There is a lot of hype around this book as it has already been picked up for a movie even before it came out. After reading this first issue, I think the big shots in Hollywood may have lucked into something big.

Our story centers around two main characters. The first one we are introduced to is Dr. Quon. He is a scientist with an expert background in robotics. As we are introduced to him, we get our first glimpse into the world of Descender. It is very much the utopian-type future where everything is white and clean and in it’s proper place. Quon lives on the planet Niyrata in a bustling city. We don’t get to see too much of the world before the big event that sets the stage for the story going forward. Planet sized robots loom over 9 of the major planets in the galaxy. Just as Quon and the team he is with being to hypothesize as to what they are doing here, they all simultaneously wipe out a huge portion of the population on each planet.

We then skip forward ten years and meet, what I assume will be our main protagonist, Tim. Tim wakes up on a mining planet where a terrible accident occurred and he is now alone. Well, not entirely, as he quickly meets the only other resident on the plant, a robot dog. It is in this meeting we first see that Tim is actually a robot himself! Of course, the cover ruined this reveal, but it is jarring how it is revealed as it truly establishes that Tim isn’t some sort of half robot, half little boy. He is all machine.

As the issue goes forward, we jump back to society at large, or whats left of it. Ever since the attack, a huge anti-robot sentiment has swept the galaxy. It has gone past simply decommissioning them to violently hunting down all robots and destroying them. And thus, we are set up for the major conflict with Tim for the story.

This was a good first issue though it didn’t blow me away. Lemire really hammers down the tone of the world while not over-inundating us with exposition and back story. If you have read any other of Lemire’s works, like Sweet Tooth, it definitely feels like this book is going to have a similar pace. The solicitations and hype blew most of the wad for this first issue which is a bummer, though I’m sure Lemire was aware of that and the next few issues will most likely have plenty of twists and turns to hook us in even more.

Nguyen’s art is a site to behold. In particular the two page spread of the giant robot looming over Niyrata is rather breathtaking. The color palettes he chooses for each scene are distinct and speak to, not only the location, but the tone of the environment. The opening panels on Niyrata are very bright and colorful when they need to be. The mining planet that Tim is on is comprised of practically all greys and it strikes hard at that feeling of isolation that Tim is feeling as he wanders around the abandoned facility.

The first issue of Descender is nothing you need to beat down the door of your comic store for, but if you have some spare room in your holds box, definitely add it to your pull list.