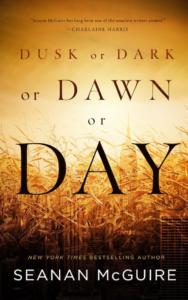 (I make no apologies for the alliteration, and neither does Seanan McGuire.)

You would have to try pretty hard to not enjoy a Seanan McGuire novel. She’s just such a good writer, so assured that the story just flows and flows. So too does the mythology, a world of witches who have affinities for many more things than the classical elements of wind and fire and so on. There are rat witches and steel witches and corn witches, and all of them know a secret or two about ghosts. That’s because ghosts likewise participate in a mythos far from the standard necromantic tragedies or scare tactics.

Ghosts here are examinations of what it really means to have “unfinished” business. So often what is unfinished is either a message of love or vengeance, but what if what goes unfinished is much simpler–the extra/ordinary acts of living and working in the world? For McGuire, ghosts arise when people die before their time. The accidents, the suicides, the murders and so on–some of them aren’t “part of the plan,” as insensitive greeting cards and distant relatives are so fond of saying. And that is a very nice model for a story, one that gives a great deal of agency to human beings but also has a system in place to right those wrongs. When you die before your time, you get to come back. You get to interact with the world mostly as you did when you were alive–which means you can keep making the same mistakes or you can grow, change, move.

Dusk or Dark or Dawn or Day is also a wistful look at the perils and promises of moving from a small town to a big city. We don’t lose our roots–certainly Jenna doesn’t, the way her Kentucky hometown of Mill Hollow pulls at her regardless of where she goes–but we do lose something, all in proportion to what we gain. What these transactions entail is ill-defined both to the traveler and the audience, but it remains affecting. The novella has a profound sense of nostalgia, not for a time or a place, but for feelings themselves: big, overwhelming feelings like Home and Hope and Promise, all the things that get tarnished after childhood. The process of earning these feelings back–or not–is messy and difficult. Especially for Jenna, who lost her sister and then lost her own life and isn’t sure where or how to pick up where everything left off.

Jenna has moved all the way to Manhattan, following her sister’s doomed footsteps in order to exorcise her ghost, if you’ll pardon the expression. Because Jenna is haunted more than she haunts, forever wondering about her sister’s suicide and the time leading up to it. Since her sister, Patty, isn’t a ghost, it was certainly her time. But that doesn’t stop Jenna from taking a job at the suicide hotline to try to keep others alive, night after night and minute after minute. She keeps meticulous track, in fact, because of the other power of ghosts is to play with that time they missed out on, for good or bad.

Ghosts absorb time from others and take it for themselves (if they want), getting them closer to their “dying day” – but they can also give that time back to punish people, making the living older and the ghosts “younger.” They act as anchors to time and the world, evening out the flow, a kind of collective temporal karma.

Or they would, if all the ghosts in New York City hadn’t abruptly disappeared. Who–or what–is behind this sudden absence and silence? And why? Only Jenna can answer that question, but to do so she’ll have to confront her own (metaphorical) ghosts, the revenants of home and memory she’s tried so hard to block out.

The mystery is compelling, but it’s not the heart of this story. The heart is connection to time and place and people, and it’s brimful of melancholic beauty. What does it mean, in the end, to save or be saved, to haunt or be haunted? The characters here lively, living metaphors, even if they aren’t all, strictly speaking, alive, and they have a lot to say on the topic of living well.