Jane Yolen was YA before there was YA, so it’s interesting to revisit a classic author via new work. Especially since that new work is a novel told entirely in poetry. Jason Reynolds and and Jacqueline Woodson are proof that the novel in verse is not just viable, but supremely potent. But what about SFF YA, the category that has exploded but not yet produced a verse novel? 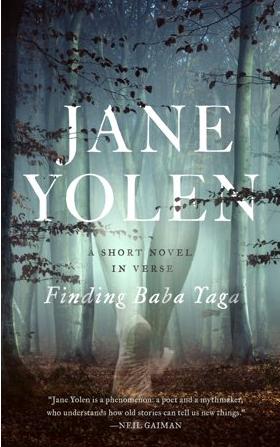 The result is mostly a success. I thoroughly enjoy the writing itself, which works both as a vehicle for the story and on its own, each poem complete. Each verse is smooth and lovely, and the combination of poems is a fast-flowing succession of bright and dark moments, like a stream running through trees. Yolen is conscious of language but not self-conscious, and she lets her storytelling carry her along.

Unfortunately, the story leaves a bit to be desired. The narrator, Natasha, is trapped in a conservative home, until one day she decides to flee with only the clothes on her back. I understand wanting to escape harsh parents regardless of the exact tenor of that abuse, but besides locking her in and washing out her mouth with soap, I’m not sure the situation was so horrifying. True, her father was controlling, and we get plenty of mentions of purity and punishment, but I didn’t really feel strongly that the only solution was to disappear. This felt more along the lines of what a child would shout in a passing fury: “you washed out my mouth so I’m going to run away and live in the woods and live with Baba Yaga!”

That is what happens, though. The tagline is “You think you know this story. You do not.” But…well, I did know this story. It’s pretty clear that Natasha will end up with Baba Yaga when she runs away, and pretty clear that she’ll be fine despite the witch’s occasional cannibalistic streak. A significant portion of the novella also follows the typical story of Vasilisa the Beautiful without much change or insight. Natasha longs for a stronger (and perhaps queer?) relationship with Vasilisa, but Vasilisa goes along on her story, oblivious. Baba Yaga is a bit more aware, but for a novella about language, the characters are not fantastic at expressing themselves to each other. It seems as though Yolen felt tethered to the rigid outlines of the fairytales, and that poetry gave her room only to provide emotional texture, not dramatic difference.

But the moments of connection between Vasilisa and the narrator—few as they are—are still affecting. As are the moments of triumph, of loss, and of reflection. I genuinely like Natasha, and found her journey from censored child to spell-speaking young woman meaningful, although not entirely as unique as the dust jacket suggests (see also “Spelling” by Margaret Atwood, and Leigh Bardugo’s “The Witch of Duva” from The Language of Thorns). Mostly, I enjoyed this and gulped it down in one sitting because the language and emotional core of the story are lovely. The meaning—to speak, to speak true, to make yourself heard—is one I will always support. The story itself could use work, but for a novella in verse, it’s still a treat.