It is not immediately apparently what ship The Forever Ship by Francesca Haig is referring to. The ship that comes from a more advanced country to save a violently divided nation? That same ship, but seen in the light of its potential to doom everyone? A metaphorical ship, bearing the final fate of humanity?

Well, Haig is a poet, and one skilled with multivalence. This final book in her apocalyptic trilogy is deeply layered with meaning as we enter the final stages of a conflict between Alphas and Omegas and their evolving relationships (or lack thereof). Into that conflict has come the emissary from Elsewhere, Paloma, who has a solution if only the two groups can decide whether to take it.

Unlike in Cass’s world, where twins are linked such that the death of one is the death of both, Paloma is untwinned. Elsewhere, her no-longer-mythical homeland, has cured the “plague of twins,” though all babies are born with some deformity, not just Omegas. This promise of equality sounds like a threat to many Alphas who are complacent in their assumed superiority. Even some of Cass’s allies would rather keep the twinning, while her enemies would go further and destroy Elsewhere in order to prevent it. And to do so, they would break the taboo against machines and unleash the blast once again, unwittingly dooming humanity. 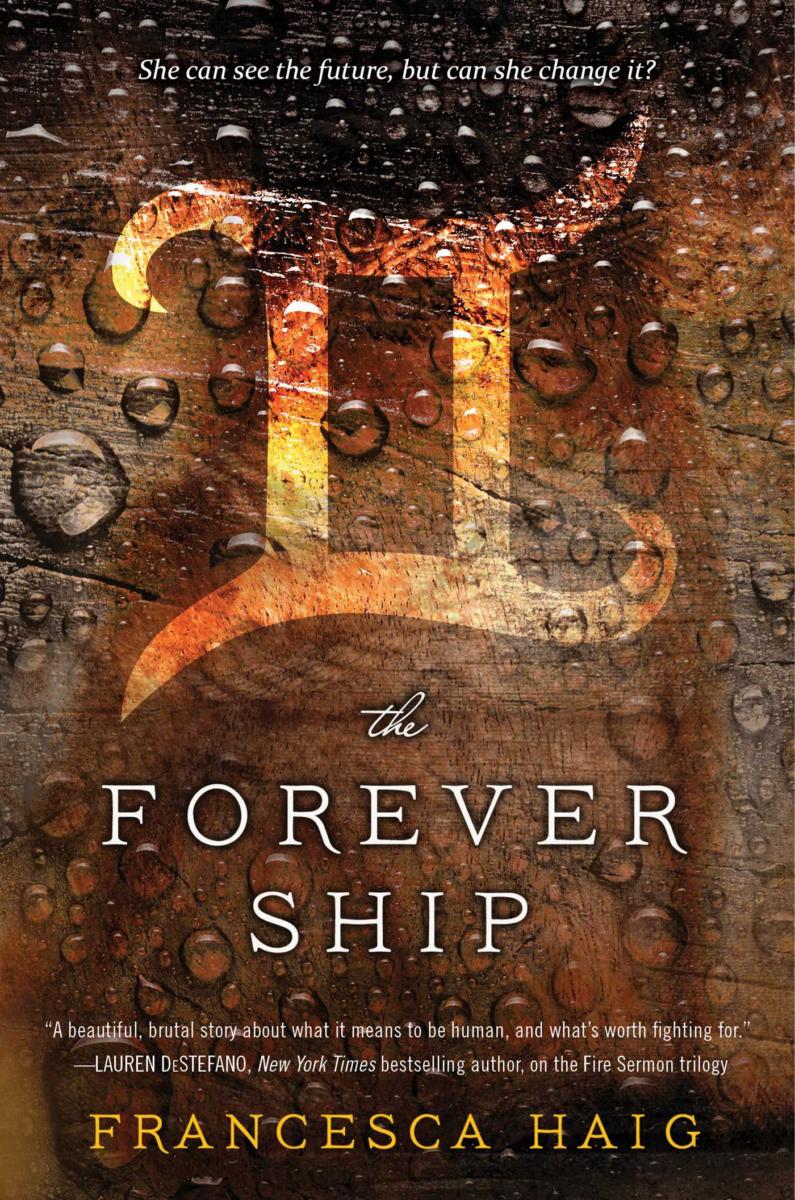 Thus the battle begun for Omega rights in book two (Map of Bones) has evolved into a last battle for the fate of the world. If the bomb is unleashed, Cass knows that it will be the true end. And unlike the Cassandra of the Iliad, many are listening to her visions. But those visions are not clear and not consistent, and boldness and subterfuge are just as necessary. So is argument, and patience. The long waiting of military life, the slow starvation of a siege, the gradual chipping away that familiarity does to prejudice–these are the weapons of change, according to Haig, that will really change the world. Or leave it in ruins.

The Forever Ship tiny bit less bleak than Cormack McCarthy’s The Road. And if it’s less urgent (owing, I think, to  McCarthy’s characters being in constant danger of starvation; Haig’s world is not quite so barren), then it’s also less ludicrous (nobody eats a baby). Haig’s world is exquisitely careful, a precarious nest of overlapping hatreds, alliances, compromises, and priorities. Breaking or even altering even one might send the whole world crashing down, cracking the fragile world like the egg.

The language seems quarried, cut very deliberately and with great effort from a dark place, and carried with infinite care to the light. Even when describing battlefields or tortured bodies, Haig has such compassion for her characters and the terrible choices they face that the effect is gentled, elegiac instead of gory. It’s the only way such a story can be bearable. Choosing between children, allies, friends–how would anyone go on? And yet Cass does, pursuing a future not bathed in fire that even she, a great seer, cannot see.

She does this not with blind slogans but with unflinching tenderness, again and again. I think it would be very easy to focus on the anger or heroism of the apocalypse, all the grand things we’ve come to expect from intentionally spectacular franchises like The Hunger Games. But there is only one battle speech, and while it’s good, the language is pressed on all sides by descriptions of terror and confusion. Battle has never seemed so suffocatingly real, the bodies in it so terribly fragile. It turns the message away from easy glory, and brings us back always from the heroic to the human. Desperation, mourning, healing–these are the focuses of The Forever Ship.

Progress has always been slow, Cass reflects, watching Alpha and Omega soldiers gradually come to trust one another, and victims of violence gradually return to themselves. There is nothing grand in such things, but Haig makes poetry from it, remarking on the heady beauty of a meal after long hunger, of a single breath drawn after the battle is over. Little things have rarely felt so huge or so moving.

No book can do everything, but I do want to point out that there is no religion, either folk or formal. I wonder if it’s a deliberate omission, and whether that comes from thinking there’s already enough zealotry and faith to be had without introducing spirits. Or perhaps Haig felt that the blast destroyed any pretenses that we could end in anything but fire. Whatever the reason, the absence enhances the desperation and finality that permeates the narrative. No one speaks of life after death, or of being saved by anything outside themselves. The only somewhat religious element is that of Elsewhere, the not-quite-paradise that quickly turns from hope to yet another innocent in peril. Elsewhere may have technology to end the twinning and alleviate Omega deformities, but it is vulnerable to the bomb.

Do the Omegas defeat the bomb? Do they defeat the Alphas, or learn to live with them? Does Cass survive–can she, with her wicked twin Zach fighting for the other side? The tension is at times as awful as the tragedy, though kind of in a good way–I really could not put this down. Even though I found the ending poetically apt but not emotionally satisfying. All the pieces come together and fit, more or less, but the emotional crux on which the entire climax turns is weak. I don’t really buy it, even though it’s well-written and contains a good deal of psychological insight into the characters. It just isn’t set up beforehand, making it seem unearned.

This isn’t to say that I dislike it. Maybe that’s splitting hairs, but I don’t. I’m satisfied with the way things turn out for the characters and the world, just not the way that it happens.

The Forever Ship also has more endings than The Return of the King, which, I get it, after three books you don’t want to let go. That’s on the editor, not the author. But the ultimate final ending is another instance of literary completion, a bit too pat and pretty for such a rough and wild world. It makes a certain kind of sense, but again, it doesn’t exactly feel earned. And it’s so frustrating to see the fate of a powerful, compassionate woman come to a close the way it does–not badly, but just so quietly. Haig has obviously given this a good deal of thought, too, and I say this not so much as a criticism as a simple difference of opinion. I think it should have gone another way. But that’s all part and parcel of this series, exactly where lines get drawn and why.

The plot also returns often to the touchstone of whether it is morally defensible to live when you are mortally tethered to a monster. I understand that Haig is saying some pretty important things about choosing the good struggle, and about the sheer tenacity of human life. I can identify with Cass, but I can also see it from the perspective of those around her: is her one life worth it when weighed against the chance to kill a genocidal villain? Much of the horror in these books could have been avoided if Cass had died.

Probably, anyway. That’s a question I’m sure Haig wants you to ask, but sometimes the plot gets a bit threadbare when you realize that the architect of much of the world’s evil could have been assassinated at any time, and all of the bloodshed avoided. I did not want Cass to die, but I had a hard time hating those who saw her as convenient collateral damage. The cost of a life in these books has been cheap, but also very high, and the meditation on that is a good one, philosophically speaking. But in terms of narrative, I do wonder if the case was made strongly enough.

These questions and more are yours to weigh and decide, and like the rest of The Forever Ship, they’re worth examining. I recommend reading this with a milkshake and a puppy, or a batch of cookies and a glass of wine. This is a book about facing the end of the world, and it’s not just that you’ll need the comfort. The Forever Ship really manages to make you feel the weight and worth of the simple things, and it’s nice to have a few on hand to savor as you savor this final book.