How do you top Nevernight, a book that’s basically Harry Potter for assassins, complete with magical, stairway-shifting school accessible only by diving through something that really shouldn’t be dived though? Well, actually the second installment does involve a diary and a giant snake, but that’s where the similarities end. Mia Corvere murders people to further her plans, to get attention, to get paid, to get even, and to get laid. She’s so Slytherin you might as well rename it House Corvere. But Mia has graduated, and to follow up her blood-soaked graduation, she’s decided she needs to become a gladiator.

Godsgrave is told from alternating times several months apart, one beginning with an assassination gone poorly and the other with Mia’s capture by slavers who sell her to a gladiatorial master. Or rather, to a mistress: Leona is a fierce competitor who aims to win big at the games. This suits Mia, who sees the culminating battle royale as the only opportunity to strike at her remaining two enemies. If she can win through the increasingly deadly games to the final clash, she will be within striking distance of Consul Scaeva and the hierophant of the sun god Aa, Cardinal Duomo. 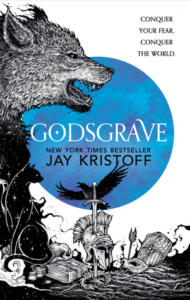 Not exactly. There are people and entire organizations who are not thrilled by her mad plan, not to mention certain…entities. These…entities…want her to stop messing around with killing the de facto emperor and focus on more cosmic concerns. She is told to seek what she does not remotely understand, that for which her only reference is in a madwoman’s diary: the moon. Who—or what—is that? (We know, of course. Jay Kristoff has left generous clues as to the myth that is slowly wrapping Mia in its tentacles, but that’s for her to discover and us to delight in.) She cares, but not as much as she does about vengeance. Not even as much as she does about discovering more about her darkin nature, that mysterious power that lets her manipulate shadows and give berth in her own to now two entities, Mister Kindly and Eclipse. The cat and the wolf bicker like, well, cats and dogs, and have no answers for her. One of her fellow gladiators might know, but she’ll have to survive training and combat to earn more than a few nasty words from him.

She also has to contend with further secrets of the failed rebellion that ended in her father’s execution and her mother’s imprisonment (and eventual madness and death, of course–this isn’t a book that skimps on the body count). These secrets bleed into yet more secrets guarded by the Church of Our Lady of Blessed Murder, until she feels rather queasy about her current vocation. The appearance of an enemy from the past only heightens her disenchantment with the Red Church, which is, on the whole, disenchanted with her as well. They may need each other, what with the ranks decimated by the events of the last book and resources for heretics thin all around, but trust between them has cracked. Whether it can be entirely shattered is the work of this second installment, which delights in undermining everything you thought you knew.

Most distressing of the revelations is that Mia finds that she has a heart. How embarrassing! Though she tries to quash every upwelling of feeling, she’s unable to prevent herself from caring for her fellow gladiators who risk their lives to further her aims (albeit unknowingly). She also sympathizes with Leona, who like her is burdened by vengeance, and begins to recognize some squishy feelings for her co-conspirators. It’s an interesting complication because rather than watching someone slowly go bad, we get to see someone slowly wonder if being bad is always worth it (versus just most of the time). The reversal of the moral quandary would be trite in less capable hands, or tragic in reverent ones. Instead we have Kristoff cracking dark jokes to ensure that nobody gets too comfortable with easy ideas like good and evil. Everyone is evil. There’s only a matter of degrees, and how much sympathy they can drum up to counterbalance it: just as everyone is bad, everyone has had very bad things happen to them, so terrible that they wring some empathy from even Mia’s desiccated heart.

Worse than a heart, Mia’s also finding that she has eyes. As a child and then as an initiate of the Red Church she was not expected to see more than her elders allowed. But now that she’s out on her own recognizance, she begins to see many of the sickening realities that undergird not just the viciously political upper class, but the whole of the empire. Slavery fuels industry, and lives are cheap. To be a gladiator means being a slave—a more valued one, certainly, but that value is distinctly measurable by success in the arena. Failure means swift demotion to a grave or a whorehouse. It’s one thing to know it happens, but when it becomes Mia’s reality, she begins to grasp it.

But she has a deeper goal, a more burning one. What are slaves and allies compared to the revenge that has consumed her for so long? Why care, when she can slip her bonds and be gone from that world as easily as casting a shadow? Mia has spent a long time with a single focus, but here she begins to question the underpinnings of her convictions. Were her parents really virtuous patriots? What will killing the people who killed them actually accomplish? And where does culpability for their deaths really begin and end, when the systems of the world begin and end in blood?

Mia is cool and compelling enough that I (and you) will be clawing at the walls for the third book regardless of her conclusions. It’s incredible, really, to have a character (and a young woman at that) who sidesteps the demands of likability on the basis of her antics and grit. She murders people, many of whom don’t deserve it, and she isn’t sorry. But what’s at stake now is whether we can still sympathize with her. Will she accept any collateral damage as a means to her ultimate end–including her newfound allies? Or will she retain some shreds of humanity that will distinguish her from her enemies? There are three hints—two in the text of the novel, one in the nature of novels—but I won’t give them away. It’s a nailbiter if ever there was one, waiting to see exactly how ruthless Mia is and how much of her heart vengeance has rotted.