Her Silhouette, Drawn in Water, by Vylan Kaftar, never intends to be what you expect. You can feel it gearing up even from the first paragraphs, ready to undermine the darkness and damp through which we watch Bianca climb, already eager to break through. Her companion on the prison planet, her lover Chela, doesn’t want her to examine the strange markings or try to escape. She doesn’t even want Bianca to remember, not her crimes and not even the mundane details of her life before prison. Why invite the pain? 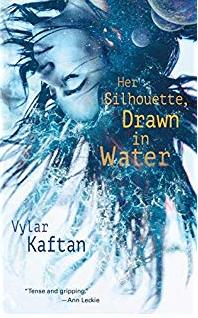 But Bianca knows that the only way out is through. She fights through swarms of vicious insects, through gunfights, and through her own doubts, which are far more crippling than any external threat. Was she really capable of mass murder? Are the things she hears in the darkness really just her imagination?

The “twists” aren’t that shocking, but I hesitate to even call them twists. The goal isn’t to shock. It isn’t even to undermine, since the story isn’t fundamentally about the environment or the mystery. The core features—Bianca’s past and her relationships with other telepaths—remain the focus, which gives the narrative a strong and compelling core. When she begins to remember, that’s when the real drama begins.

For Bianca and many others, memory is an act of defiance. This is true of cultural memory, of course, but also of personal memory. When what you are is considered dangerous, being able to tell your own story and define yourself in ways that run counter to the majority narrative is power. Bianca has that power, but she only gradually learns to use it. She has a head full of bad memories, and she falls into the trap of believing that they confirm the larger narrative about telepaths being inherently bad. Learning to break that narrative is an ongoing process, one Bianca can’t fully accomplish without the help of Chela and another mysterious woman who smells of long-forgotten flowers. For all of them, love—including self-love—is a radical, redemptive act.

The story is fast-paced to the point of being rushed, and it could have benefited from a few additional pages of reflection or a few more memories of a time before the immediate crises. I would also have liked to learn more about “contagious” telepathy, the ability of strong telepaths to gift others with abilities spontaneously. It’s a really great idea and I hope Kaftan takes it further in other stories, related or not—though hopefully related, since I would like to know where Bianca goes next.

Her Silhouette, Drawn in Water will be released May 21st.