If you like horror but haven’t read The Rust Maidens, you’re in for a treat. This story of body horror, industrial uncanny, and all-around eerie ladies is one of my favorite books from 2019. The Bram Stoker awards agree, since it’s also been nominated for Superior Achievement in a First Novel. We were able to chat with Kiste about her impressive debut and about writing in general.

1. The setting for The Rust Maidens is so potent. Did the story arise from the location, or did it come in later?

It was a little bit of both actually! The initial concept started way back around 2015 when I wrote a story called “Reasons I Hate My Big Sister,” which dealt with female bonds, coming of age, and body horror. That piece really stuck with me as a storyteller, and I kept trying to figure out a way to expand the idea without simply retreading the same ground. In particular, I wanted to do something different with the metamorphosis. I love the body horror subgenre so much, and I’ve always felt like it works best when the bodily transformation is not only done in an unusual way but also tied in directly to the themes and setting of the story.

So I put the idea in the back of my mind, waiting until I could figure out how to expand it. It wasn’t until a couple years later when I was writing another story that I’d set in Cleveland that it occurred to me to use the rust and rot and poisoned water of the Great Lakes region as a springboard for the body horror. The decay of the Rust Belt is something that’s always been with me, having been born and raised in Ohio, so taking that setting and integrating it into a coming-of-age horror story seemed like a really exciting way to return to this concept. 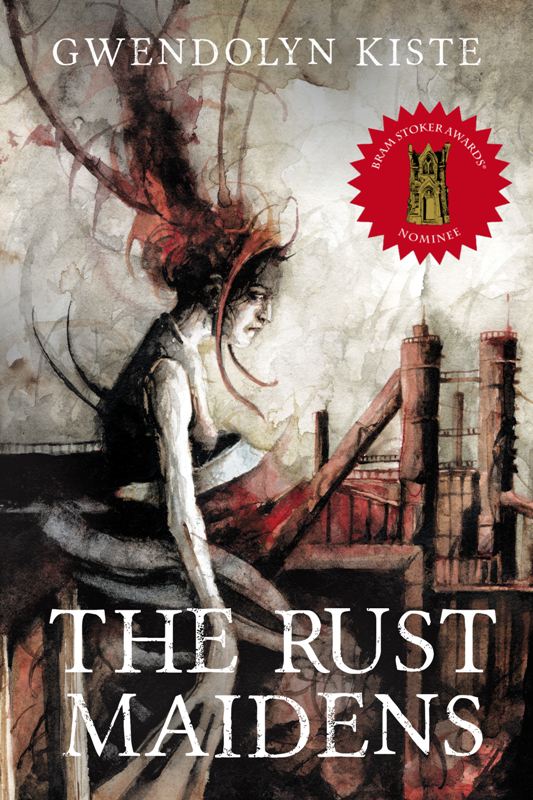 2. Love doesn’t “fix” the monsters or turn them human; it actually allows them to find their fullest form. Do you see monstrousness as an ideal more than a consequence?

I would never have phrased it quite like that, but yes, I really do view monstrousness more as an ideal rather than a consequence or a punishment or anything else negative. Part of that probably comes from my general wariness of human beings. As a species, we can be so incredibly cruel, and from the time I was very young, I’d always hoped for more than that in life, to find something better than the casual malice that runs rampant in this world. That almost certainly fed into my love of horror and monsters in particular. The notion of becoming something more, something that might be even greater than human, does seem to me to be so transcendent. Obviously, there are those who wouldn’t agree with that statement, such as many of the adults in The Rust Maidens, but I definitely have the same perspective as Phoebe does in the novel—of seeing the changed girls not as abhorrent, but instead as beautiful and powerful.

3. Part of what makes The Rust Maidens so eerie is that there is never a full explanation for the cause of the “illness.” Do you ever intend to delve deeper into this mythos you’ve created, or do you prefer to leave us with the ambiguity?

At this point, I feel as though I’ve finished exploring this particular mythos, for the moment anyhow. Leaving the reader with that ambiguity gives them a chance to decide what exactly they think happened to the girls. As I was writing the story, I definitely made up my mind as the storyteller as to what was happening and why, but ultimately, I decided to back off from a complete explanation. This might just be me, but I think too often, trying to painstakingly describe something so fantastical can take away some of its power. As a reader, I’ve always loved that little bit of unknown at the end of a story. It can keep me thinking about a book far longer. (Interviewer note: yes!!)

That being said, I hate to say never in terms of returning to the world of The Rust Maidens. Maybe one day, I’ll change my mind and continue this mythology in some way. I certainly love the characters enough to want to find out what they’re up to. So I guess we shall see!

4. Female friendship is such a source of strength, but also so consistently threatened by almost all the adults in the town. What do you think is so scary about women, individually and collectively?

One thing I’ve considered over and over as both a horror writer and a horror fan is how often women are viewed as “the Other.” I think part of that comes from women’s status as outsiders in society. Historically, we’ve so rarely been given the opportunity to explore who we are and who we want to become. For most of civilization, women have been wives and mothers and not allowed to do much else. Things have shifted somewhat over the last few decades, but not nearly as much as we need.

So when women forge strong friendships and decide they no longer want to accept these limitations, it can be seen as disruptive or even outright terrifying. The idea of an individual simply not accepting their so-called “station” in life is scary to those who have tacitly gone along with the status quo for so long. In The Rust Maidens, female friendship helps the girls not only discover their power, but also assists them in seeing just how much stronger they are when they come together, which is something the families on Denton Street realize as more and more of their daughters start to transform. Even one at a time, the girls seem dangerous to their families, but put together, the adults becomes increasingly horrified at just how powerful the Rust Maidens are, even though the girls are not as overtly threatening as many of the adults trying to keep them in line.

5. A lot of horror starts out with people at equilibrium and tries to make them fearful and isolated. But the neighborhood you describe in Cleveland is already afraid–afraid of a strike, afraid of a shutdown, and almost every individual is afraid of what everyone else thinks. By contrast, the “monsters” themselves are neither fearful nor particularly interested in inspiring fear, and it’s the monsters who are isolated, not the “normal” people. Was this reversal intentional? Do you like to find horror more in the mundane or in the supernatural?

I was definitely looking to explore that idea of disequilibrium from the start. The Rust Belt is a region that’s so well known for its uncertainty, and I hadn’t seen that setting used too often for horror, which only made me more eager to delve into it. Right away, it seemed like the only way to write about the area was to show that deep-seated doubt the characters are experiencing right there from the first page.

The supernatural can of course be wonderful to mine for horror, but personally, I do love to look at the mundane as well. Everyday life can be its own special kind of horror, that unease we face each morning just trying to get through the routine difficulties of the day. With The Rust Maidens, I wanted to integrate the girls’ strange transformations with more seemingly commonplace issues like job security. With the whole neighborhood already under stress from the potential strike and mill closure, one more problem becomes the catalyst for everything breaking apart. I feel like life can be the same way. Girls might not be turning to rust in the real world, but many of us have experienced that moment where something tips the balance and sets our lives in an unexpected and sometimes disastrous direction. Making that so-called final straw be this bizarre metamorphosis was a way to blend the mundane with the supernatural, which was how I tried to keep the story grounded in reality even while things take some very fantastical turns.

6. You’ve been nominated for a Bram Stoker, and many of your works deal with dark and perhaps frightening themes. But do you consider yourself a horror writer? What does horror mean to you?

I do very much consider myself a horror writer, first and foremost. I’ve loved the genre since I was a kid; my parents raised me on Edgar Allan Poe and Hammer films, and I adored every minute of it. As I’ve gotten older, I’ve loved exploring all the different facets of the genre, from slasher films to the more sinister elements of fairy tales. I’m of the opinion that horror is hiding everywhere, in fiction and in life; you just have to know where to look for it.

For me, horror can mean so many different things. It can be something that’s outright terrifying or simply unnerving or at once devastating and even awe-inspiring. At its best, horror explores the darkest recesses of who we are as human beings. It exposes those things that hide below the surface, the parts of ourselves and our psyches that we might not want to face. Those aspects of us don’t always have to be bad; sometimes, seeing who we really are can set us free. That’s the sort of horror I love, and those are the places I hope to explore most in my own work.

7. You have the chance to be one of the characters from The Rust Maidens. Whom do you choose?

Wow, I love this question so much, because I honestly never thought I would be asked something like this! My initial instinct is to go with Phoebe, because she’s probably the most like me, but I’ll resist that urge and choose Eleanor instead. As a baby in the first part of the story and a lost adult in the more modern section, Eleanor goes through so much in the course of the book, but she never loses hope, and she never loses her desire to know the truth about what happened to the Rust Maidens. Even after everyone else, including Phoebe, has tried to forget, Eleanor keeps going. She probably has the greatest emotional endurance of any character I’ve ever written, and to be honest, on my worst days, I could probably learn something from her perseverance. She’s a character that if I met her in real life, I would very much admire her.

8. Can you tell us anything about your next project?

At the moment, I’m mostly toiling away at short fiction. I’ve been fortunate enough to be invited to a number of really fun and exciting horror projects over the coming months, so I’m doing my best to finish up those stories and hopefully challenge myself to take my work in some fresh directions in the process. If all these plans come to fruition, I’ll have some new fiction featuring everything from vampires and body horror to a Final Girl determined to figure out a different way to beat the monster.

Other than those short stories, I’m also embarking on a new longer fiction project. It will tilt a bit more into folk horror than my previous work while also taking inspiration from Angela Carter, especially her collections, The Bloody Chamber and Saint and Strangers, as well as some lesser known but wonderfully strange films like Eye of the Devil and Valerie and Her Week of Wonders. My plan is to have that book done by the fall, so if all goes well, I’ll have something to announce next year. As always, my writing plans are perpetually subject to change, but so long as I’m creating in one way or another, I’ll be more than happy.