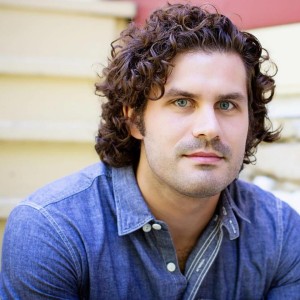 Marvel’s Jessica Jones is set to premiere on November 20, 2015 on Netflix.

GeeklyInc: Tell us a little about your background and how you went from Harlan, Kentucky to California?

Jesse Harris: After college, I wrote/produced this independent film, Surviving Guthrie, with my director/co-producer/mentor Ed Smith. It did pretty well at the festivals so I decided that I didn’t want to work in the bank any more (had been doing that during the day while shooting at night). Used that to get into graduate school for my MFA [Master of Fine Arts]. I moved to Boston to attend Emerson College. Did another short, Sour Notes, did some festivals with it, then moved to Los Angeles to start the slow grind up the mountain. First two jobs were as an Office PA, but through a strong recommendation, I got the writer’s PA job on JJ [Jessica Jones]. Worked my way up through the ranks there, jumped to Executive Asst/Script Coordinator, and then to Writer’s Assistant. Essentially, it’s the job before The Job. 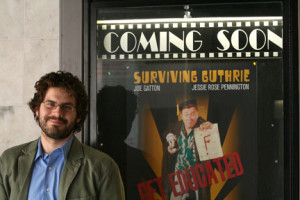 What have your experiences been like writing in Hollywood?

Hollywood is weird and great. Growing up in Harlan, KY gives you a very, very different perspective than most out here. It also forces you to look at the world through other people’s eyes, because growing up, no one was telling stories about respectable people in Appalachia on TV (but thank God that’s all changed…). As a writer’s assistant, it’s a TON of note taking in the writer’s room, but there’s a creative side to it. You’re doing a lot of fill-in (writing outlines, expanding outlines into first drafts, touch-up/rewrites) work for the writers, which mean you have to be able to copy their style – and often they have to mock the style of the showrunner. You have to play everything by ear: some writers really want you to expand on an idea, while others want you to translate theirs exactly. Like everything else out here, you have to fail a lot to learn how to deal with each case. Usually I find the best path is to try and find a creative way to get to the ending they wanted.

How did you get your start with working on Jessica Jones and what has your experience been so far?

It was crazy and fun. Working for Marvel, you’re essentially being asked to go over to a friend’s house, being shown their toys, and then they tell you which toys you can and cannot play with. But the showrunner, Melissa Rosenberg, put together a really awesome team of writers. She has a strict top-down “no assholes” policy, and it translates really well. I would work with any one of them again in a heartbeat. 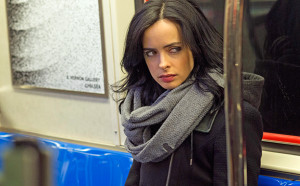 Do you enjoy comics generally or was this just a job?

I went through that stage when I was around 12-14 where I really got into them, and then kind of fell off for the next 13 years, until I got to grad school and got into Neil Gaiman (as was required by Emerson College). Since working on JJ [Jessica Jones], I’ve gotten pulled back into them. Some New Avengers stuff, Southern Bastards (essentially Walking Tall, but a graphic novel), Hyperion. The great part about it is I get to read a bunch of comics and chalk it up as “research.” Much like when I was working on the last failed attempt at a Hot Wheels movie and I got to play with Hot Wheels all day. Now I’m working on this Harley-Davidson miniseries, and we go to the motorcycle dealership about once a week. So essentially every job is just me being a giant child.

How much of what is on the page is actually what gets filmed?

In TV, a LOT. It’s the writer’s medium for a reason. If it’s a shooting version of the script, I’d say 98% of it was on the page. That 2% is usually made up of scheduling conflicts, actor requests, or weather.

If you could only write one genre for the rest of your career what would it be?

I love genre stuff, mostly action-heavy comedies (or comedy-heavy action). And I mainly write for female characters, so working on JJ was a blast for me, as it was right in my wheelhouse. Generally speaking, I just find women more interesting than men, as we’ve seen every iteration of emotionally-stunted asshole man. That’s my life and it’s boring. Don’t need to spend any more time with it, thanks.

If you could write about any comic book character who would you choose?

I dunno. Maybe it’s already being in the system, but there’s just so, so much interesting stuff out there, especially in the Marvel world, that when you get down to random or forgotten characters, you see weird amounts of potential for the D-level (or Z-level) names. Not to be a company man, but with the way that the MCU [Marvel Cinematic Universe] has downsized for Netflix is really interesting; you can do things so much smaller on both a physical and emotional scale. There’s the scene in one of the New Avengers where Jessica reveals to Peter Parker that they went to high school together, and she had the biggest crush on him, and he had NO IDEA of any of this, until she mentioned she was in a coma and he goes “Oh! Coma Girl!” And she’s just crushed. Replicating that moment, I’d really like to do that. 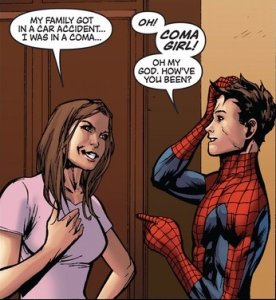 What do you think about the advent of cinematic universes?

It doesn’t matter if it’s a comic or a book, film and television are completely different media than comics/books. People get upset all the time about changes that are being made once things hit the screen, but there are just some things you can’t do. Like Tom Cruise as Jack Reacher. Jack Reacher is 6’6”, 300 lbs. in the books. Tom Cruise is… not. Tom Cruise can get a movie made (and is a big enough personality that you can make the jump), and unless you’re Dwayne Johnson, there’s not a ton of 6’6”, 300 lbs men that can get a studio film green lit. People need not be too precious.

What are your favorites when it comes to TV and movies? What are you excited about seeing?

I don’t have a lot of time right now, so I don’t watch many hour-long shows. Red Oaks on Amazon is fantastic. The Wet Hot American Summer prequel made me extremely happy, and then terribly sad that I didn’t have more. Every week that Last Man on Earth is on the air I’m amazed; it’s just so stinking good. Like, at some point Fox is going to realize this is on and stop this, right? Mostly, it’s just Futurama and John Oliver and Kitchen Nightmare At the movies, Pawn Sacrifice has been my favorite thing I’ve seen this fall (it’s crazytown in all the right ways), with The Martian being a close second. The Martian is going to rightfully win everything. Aren’t we all just killing time until Christmas waiting for Star Wars or The Hateful Eight? And of course, Jessica Jones, because I really want to talk to people about it without the fear of S.H.I.E.L.D. agents burning down my apartment.

What advice would you give to aspiring writers?

Write. Whenever, wherever you can. Having a great idea means nothing. Tons of people have great ideas. Not many actually get them to paper. And be open to notes: again, don’t be precious. You’re making movies for an audience, not for yourself. And if you’re breaking into Hollywood, just work hard and don’t have an attitude. You’d be surprised how far “being competent” will go. 99.9 percent of people start out as a PA. Don’t act like you’re better than the job; that gets a lot of people in trouble.