We have uncovered more information about the final GeeklyCon House, as well as some interesting facts about the tournament. From a printed email from 2006, we learn that House Nahvalr was winning the House Cup when the tournament was abruptly canceled.  The reasons are still a mystery to us. We will continue to research and report on the cause of the cancellation when possible.

We have also decided to bring the House Cup back for GeeklyCon 2017! You can read up on the House Cup rules here. The first step to joining in on the fun is to be sorted into your house. Only GeeklyCon ticket holders will be sorted.

Do I have a story for you?!  So, you know I was at GeeklyCon 2006 in Bangalore, India.  GC was a blast like always and all 5 Houses were competing for the House Cup something fierce (well, fierce but still in a semi-friendly manner like in the years past…you remember!).  Well anywho, through the whole time at GC, House Nahvalr was winning…like we were poised to win the whole damn thing.  No other house was even close to us but then all hell broke loose.  THE GC ORGANIZERS FREAKING CANCELED THE HOUSE CUP TOURNAMENT!!  CAN YOU EVEN BELIEVE IT???

Obviously, House Nahvalr was broken hearted.  How could this even happen?  We were so close to winning!! The organizers gave no reasons as to why the tournament was canceled – they were holed up in a secret meeting for hours before and after the announcement.  Of course everyone has their own theory about why the tournament was canceled but I have the real answer: THE ILLUMINATI.  I mean, they’re probably reading this email as we speak – they have their hands in everything.

Well, I hope everything is going well with you.  I know you were sad about missing GC this year but there’s always next year!  I’m at the airport, waiting on my flight back home.  See you soon! 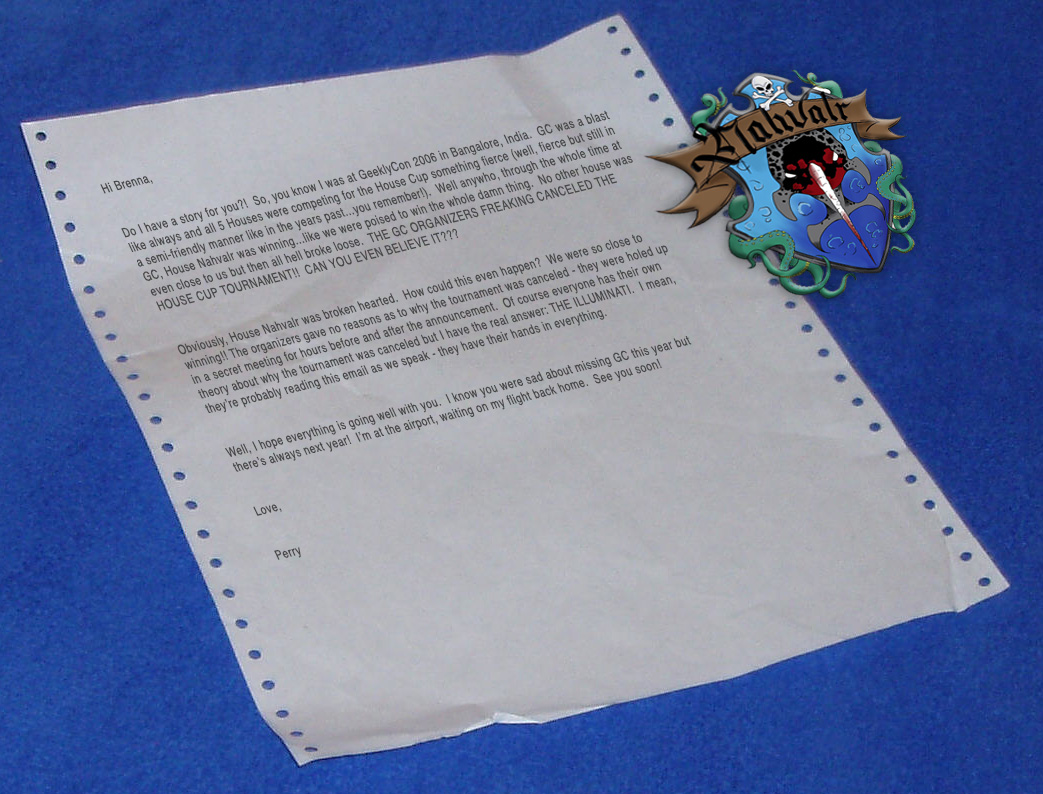