Loonacy is the rapid fire card matching game from Looney Labs, the makers of Fluxx. If you ever played the classic card game Speed while growing up then you’ll love this new twist on the classic game. Like Speed, when playing Loonacy players attempt to simultaneously match cards in their hand to cards in a discard pile all while racing to get rid of all of the cards in their hand. Rather than basing play off of card values as you would in Speed, players in Loonacy must make matches from images on either half of a given card. 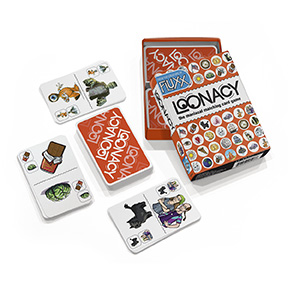 Sound simple? That’s because it is, and in this case the simplicity is beautiful. The game takes around two minutes to learn, and once you’ve started to play, stopping can prove difficult.

One mechanic that makes Loonacy unique among other card matching games is its reset phase. The game moves at a lightning fast pace while all the players are trying to make matches, but from time to time there are simply no matches to be made. When this happens play stops and each player draws a card to add to their hand. The result is a change of tempo that more often than not creates opportunities for players with several cards in their hands to catch up and can change the game completely. A great byproduct of this is that as a player you never feel like you’re completely out of the running to win the game. This change of tempo also allows ALL of the players a brief chance to relax before the onslaught of furious card matching action begins again.

Loonacy is recommended for 2-5 players, and I found that the more players involved the better the game gets. Grab some friends, deal the cards, and let the loonacy begin.

Get Loonacy on Amazon