Have you ever wanted to play Dungeons and Dragons but wanted to ease into the roleplaying, world, and throwing of dice? Well then definitely check out the Lords of Waterdeep board game. It gives you a canonical introduction to the world of Faerun (a Dungeons and Dragons location in the Forgotten Realms campaign setting), including not only the places, but also the people-providing the players with information on the roles and backstories of key characters.

The basic premise of the game is that as the player, you get to play as one of the Masked Lords of Waterdeep. Waterdeep, called the “City of Splendors”  is the most influential city in Faerun, a large trading port town, run by a group of 21 lords. The Masked Lords are these 21 individuals,  20 of whom remained masked to protect their identities. As the player, you get to act as one of these Masked Lords through the a card; which lays out their main focus for the quests that can be completed. The different types of quests players can take are Piety, Commerce, Skullduggery, Warfare, and Arcana and each player gains more points for the preferred quests indicated on their lord card. Players take quest cards and then use the spaces on the board to gain resources so you can complete the quest. Each quest card comes with a different number of victory points (which allow you to move around the board) and in some cases a small “reward” for finishing the quest-such as being able to place your marker on an occupied location or take additional gold/resources. Once completed each player moves their token around the board (similarly to Ticket to Ride’s point system) and at the end of the game the person with the most points wins. 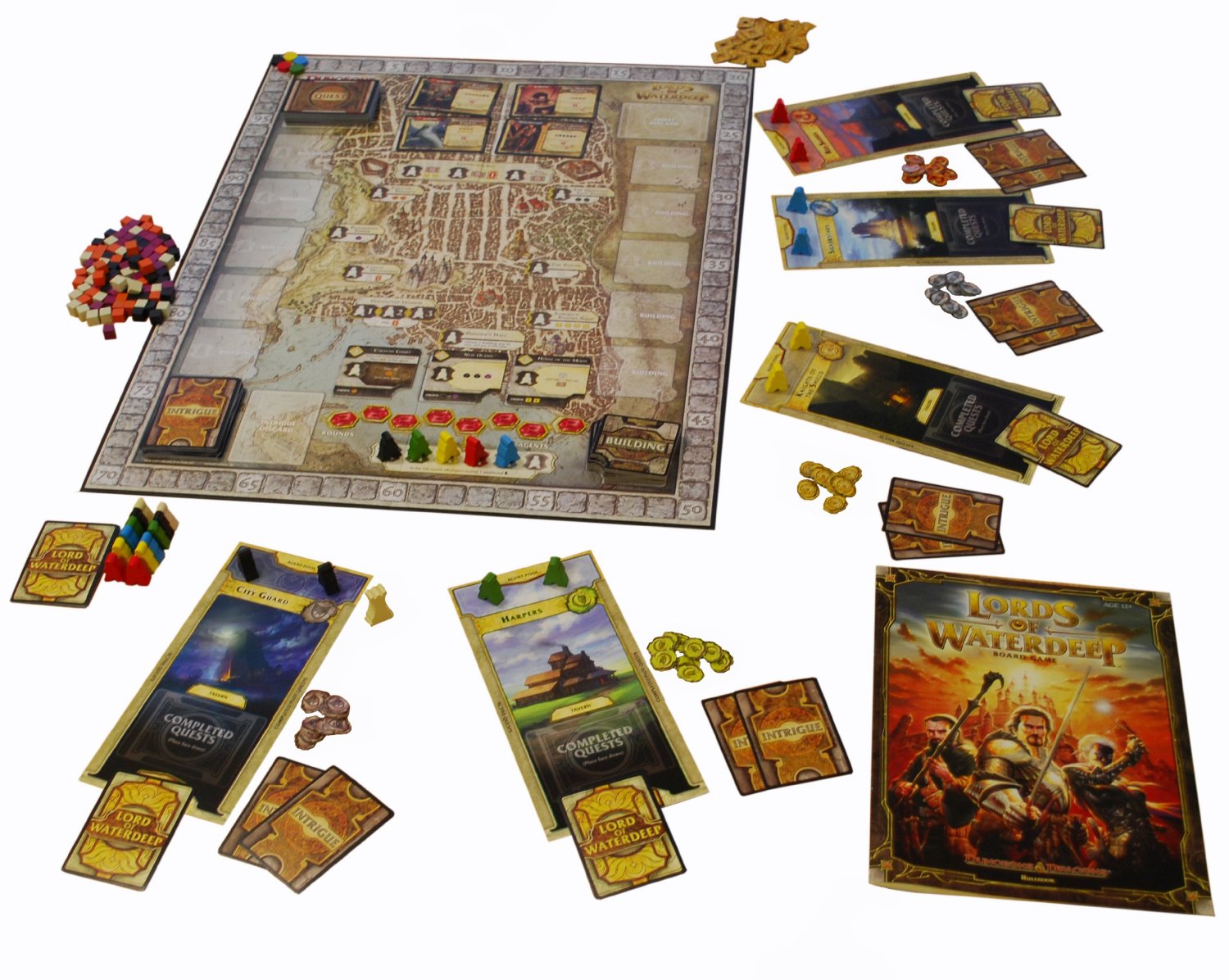 Sounds easy right? Well for the most part it is easy and doesn’t take too long (an average game will take about an hour or so) to finish so it is great for people who are just learning to play. Although there is some strategy in the game, such as where you decide to place your markers. Each player is granted a set number of “meeples” that you then place on different sections of town. The strategy comes in that there can only be one meeple per location and that it is possible to change the order of play. Players can also use certain cards to give other players forced quests that they must complete before doing anything else, which when only one quest can be completed at a time, really gives an opportunity to sabotage their game plans.

Overall, I think this is a great game that can equally enjoy with D&D players and people who just enjoy board games. Also there is an expansion Lords of Waterdeep: Scoundrels of Skullport that allows you to increase the number of players from 5 to 6 and also adds in loads of new content. Oh the other good thing about this game? It can be played with only 2 people, which can be really great if you don’t quite have a bunch of gaming friends. I definitely would recommend this game to anyone, it is entertaining, allows for some introduction into the world of D&D, really fast to pick up, and is good for pretty much anyone!

Buy Lords of Waterdeep on Amazon