It’s something everyone has experienced: a school room filled with boys and girls giggling gleefully while passing notes that read: “Do you like me? Circle yes or no.” In Love Letter, Alderac Entertainment Group, makers of Smash Up, invites players to go back to those simpler times in order to win the affections of their beloved.

Love Letter is a role-based card strategy game where two to four players compete against one another to ensure that the princess receives their love letter and no one else’s.  The game consists of a series of rounds, each of which culminates with one player winning a token of the princess’ affection.  The number of tokens required to win the game varies depending on the number of players; the more players the fewer tokens needed to win. 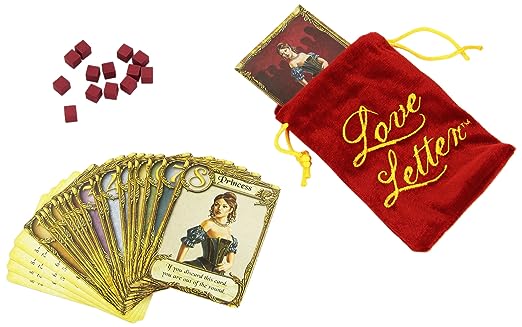 The fun in this game is in how players win those coveted tokens. Love Letter has a deck of 16 cards, and each card is assigned a value ranging from one to eight.  Some cards have two copies in the deck, some cards have only one copy, and one card has five copies. Each round starts with players being dealt one card, and on their turn they draw another and must choose which to discard.  All of the cards, in addition to having values, are named after various members of the princess’s court, and each has a unique effect that must be applied when discarded.

For example the eight card, the princess, has an effect which states that a player loses the round if they choose to or are forced to discard this card. Some cards target the player who holds them while other cards target other players. The person with the highest value card at the end of a round wins the token.

I’ll be honest, when first asked to play Love Letter it did not seem like it would be a game that I would personally enjoy, but it took less than a round to get me hooked.  The game is deceptively strategic. Players who play too many low cards risk their opponents assuming that they’re holding a high card. Players who play high cards risk not drawing a high enough card to win. Both the rounds and entire games are quickly played and one game takes around 15 minutes to finish, though I can say that I haven’t stopped at just one game yet. Another great thing about Love Letter is variety. Right now there are six editions of Love Letter each with a different theme, including Munchkin Loot Letter and Letters to Santa. AEG has even announced Love Letter: Batman Edition that will be released March 9th 2015.

The game can be played with two players, but I preferred it with four. The two player game is much more of a chess match, while the four player game feels more like a crazy variant on poker.  Love Letter is great fun, is easy to learn and will provide hours of entertainment. Needless to say, I think this game would make a fantastic addition to any gaming library.

Get Love Letter on Amazon