Do you remember your first game of Magic?

I’ll never forget mine. I learned about Magic in the August 1995 issue of Disney Adventures magazine—the literature of choice for the sophisticated ten-year-old, and also a giant advertisement I paid Disney to send to me. In between page-turning news of the upcoming Power Rangers movie, there was a short article on a weird-looking card game. I didn’t want to read about Magic at first, but it was summer and I got bored. Then I got interested, and when a friend mentioned he had a few decks, I asked him to teach me to play.

Our first game lasted for almost an hour, with my giant green creatures stymied by my friend’s [mtg_card]Drudge Skeletons[/mtg_card]. Fortunately (for me), even between my friend, the rulebook, and the Disney Adventures, I didn’t quite grasp the distinction between “mana pool” and “lands I have in play.” (Hey, lots of people do it.) So every time I tapped my [mtg_card]Llanowar Elves[/mtg_card], I assumed I got an extra [mtg_card]Forest[/mtg_card], to keep in play forever. This went on turn after turn; when we ran out of physical Forest cards, I started using tiny pewter soldiers as Forest tokens, stretching them out in a line across my friend’s bedroom floor. Eventually I had enough lands in play to hit my opponent with a double-digit [mtg_card]Hurricane[/mtg_card] for lethal damage. 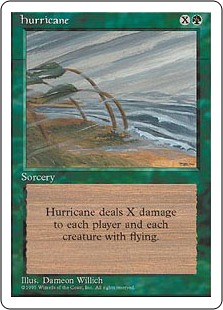 The fourth grade finisher of choice.

I found myself thinking of that first game a few weekends ago, when I spent the weekend at Boston Comic Con running demos for my Friendly Local Gaming Store, Pandemonium. Teaching people to play Magic for the very first time brought into focus how much I’ve learned—and how much I’ve learned to take for granted—over the last twenty years.

Magic is a complicated, complicated game. Of course, that complexity is what makes it so interesting—still interesting—twenty years later, for someone who avidly reads about and plays the game. But with all that practice, it’s easy to forget what it was like to read your first mana cost. It’s not just the basic mechanics that have become second nature, but abstract theories like tempo, best practices like “hold instants” or “play lands and cast creatures in your second main phase,” and bedrock concepts like card advantage.

The brand-new players I was teaching, on the other hand, had a different set of challenges to navigate:

Almost every item on this list comes from a misunderstanding a new player made during one of my demo games. Lest anyone question the sample, every person I interacted with was bright, and many were experienced gamers. But it’s important to note that there is a lot that experienced players have internalized. New players are learning all of this at once, and it’s a lot to learn.

I didn’t go into battle empty-handed, however. To help intrepid game demo-ers like me along, Wizards of the Coast produces handy demo decks for exhibitors to use as teaching tools. They come two to a pack—two thirty card decks, each a single color—and are meant to be given to new players to keep after the demo is over. (That part is especially rad; everyone I played with was elated to get cards for free.) You can see decklists for those sample decks here.

Useful as they are, these decks each contain a number of cards which I think are a bit too complex for new players:

There are also some troubling power level disparities: 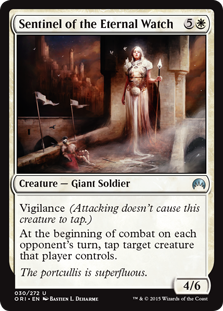 Welcome to Magic! Hope you like feeling ineffectual and helpless.

I played the white demo deck a lot, and never once did I cast this card. It’s great to have big creatures that can swing the game back in your favor if you’re behind—dramatic comebacks are a great way to get a new player hooked. But did they have to include a card with a recurrent triggered ability, one that requires sophisticated knowledge of the turn structure, whose utility isn’t clear if you don’t already understand how to attack? Particularly if it’s one that drags the game out and makes your opponent feel helpless? After all, Mark Rosewater’s first rule of teaching new players is “make sure they have fun.”

Lest I be too harsh, I want to recognize that there’s some reasoning behind the madness. In the first place, WotC’s decision to make the demo decks consist only of Magic Origins cards makes sense, as the demo decks are gifts to new players—you wouldn’t want to give them cards they can’t use. Giving new players a few powerful cards also makes sense from that perspective. (The decks do include a few cards from earlier expansions—technically Standard legal, though not printed in any current sets and unlikely to see play in any tournaments).

Like most expansions these days, Origins has only one cycle of vanilla creatures (creatures with no abilities) at common, and the developers used all of them in the demo decks. Moreover, what vanilla creatures there are has to be dictated by the Magic Origins limited environment. So in some ways, the goal of “make the demo decks easy to understand” is at odds with “give players useful cards to get their collections started.”

But given that the designers do add a few additional cards in the demo decks (like the aformentioned [mtg_card]Flesh to Dust[/mtg_card]), it’s a little curious that they didn’t use those slots to load the decks up with simple, staple effects to balance out the relative complexity of the Magic Origins cards. Something like [mtg_card]Oakenform[/mtg_card]—just the simplest expression of an aura—could have gone a long way.

A Different Set of Demo Decks

Playing a few games with Wizards’ demo decks got my gears turning. Magic is a great game, but a complex one. How could I most effectively teach it to someone who had never encountered it before? Could I reduce the complexity for new players? What are the most important things to emphasize? How do I make sure the game is still fun?

Wizards pondered these questions themselves after the Time Spiral and Lorwyn blocks, when they noticed that new player participation had started to drop off. They theorized that the game’s complexity was one big reason newer players were finding it difficult to learn and stay engaged. (It didn’t help that Time Spiral intentionally called back dozens of mechanics from throughout Magic‘s history.)

Wizards’ solution was a set of design principles they dubbed “New World Order,” aimed at simplifying the game’s complexity in its common cards. This included both simpler mechanics (on average) and simpler cards—more straightforward spells and creatures that were easier to understand, fewer activated and triggered abilities to create ice cream headaches from keeping them all in mind at once.

Inspired by these “New World Order” ideas, I decided to try it myself: I built two demo decks riffing on classic themes: a red-green deck stuffed with big monsters and a few burn spells, and a blue-black deck with some flyers and good defenders:

[If you prefer, you can see the decks on my tappedout.com account here (red-green) and here (blue-black).]

I built these decks around a few overarching design principles which I hoped would emphasize key points for new players:

So how did my decks fare? Well, but not perfectly. A few card choices turned out to be poor in practice: [mtg_card]Rotting Mastodon[/mtg_card]’s 8 toughness felt oppressive; [mtg_card]Mental Agony[/mtg_card] seemed a bit too feel-bad as I had it in my hand; [mtg_card]Natural End[/mtg_card], while cute, never really came up. I wanted to include [mtg_card]Child of Night[/mtg_card] as I thought new players would find lifegain neat, but it’s not the most resonant of vampires.

I also realized it’s important to build progressions into these decks—that is, to know beforehand how the game will play out, so that each player has clear choices and the game itself doesn’t stall out. I moved in this direction by making starting hands for each deck and stacking the top seven or eight cards, but I think I should have thought specifically about what each deck should do on each turn of the game, and planned accordingly. (As luck would have it, my first games with the decks were against precocious kid who absolutely insisted that we shuffle the decks beforehand because that’s what you do with a card game.)

The nice part about scripted games is that the demo-er can plan to introduce new concepts into the game organically, as new creatures are drawn. My [mtg_card]Maritime Guard[/mtg_card] versus your [mtg_card]Goblin Piker[/mtg_card]? Good for me. Wait, you drew a [mtg_card]Centaur Courser[/mtg_card]? Hm, that changes things. But here’s my [mtg_card]Wind Drake[/mtg_card]! And so on. Moreover, when you control the cards each player has, there’s no moment when you have to make suboptimal plays to keep the game interesting. No need to be pedantic; Magic players, even new ones, are smart.

For all these reasons, I can see why the Magic Duels game is such a useful too for teaching new players. The game can walk players through reading cards, casting spells, attacking with creatures, and so on, step-by-step. There’s no need to play with hands face-up or to dictate plays—the game can make its own suggestions. And the game designers control what the new player sees, so he or she can encounter new game concepts in a logical sequence along a manageable learning curve.

I’m glad I had the chance to teach a lot of people how to play Magic for the first time. It really brought back a lot of memories for me, and creating my own demo decks was a great challenge for the game designer in me. It’s a topic I look forward to returning to, especially as I try to make multiplayer variants like Commander more accessible and more fun for my friends.

What about you all? What was your first game of Magic like? And what’s the funniest story you have from teaching the game to new players? Sound off in the comments or let me know on Twitter (@cutefuzzy_)!