While the rest of GeeklyInc.com is off at PAX East this weekend, trying new games and writing them up on the website, I’m stuck at home.  Fortunately, that meant I was able to dodge the crowds and catch the livestream of the Magic: The Gathering panel.  It was a doozy!  Let me tell you all about it: 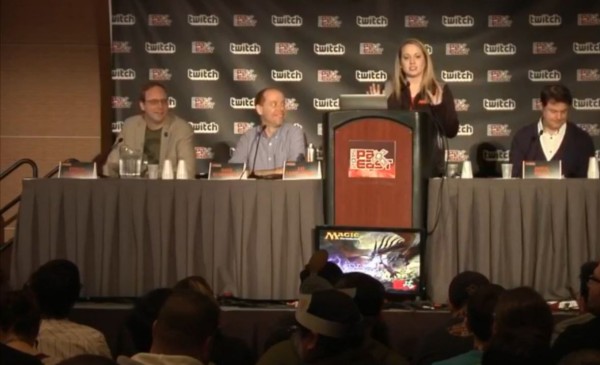 First, our panel.  From left, we have Magic designer Ethan Fleischer, developer Dave Humpherys, emcee and brand team member Liz Lamb-Ferro, and creative team member Doug Beyer, who will hereafter be styling himself “Superpresident,” in honor of Sarkhan (actually not a name but a title meaning, “great Khan”).

We also had guest appearances from two awesome cosplayers.  Take it away, guys: 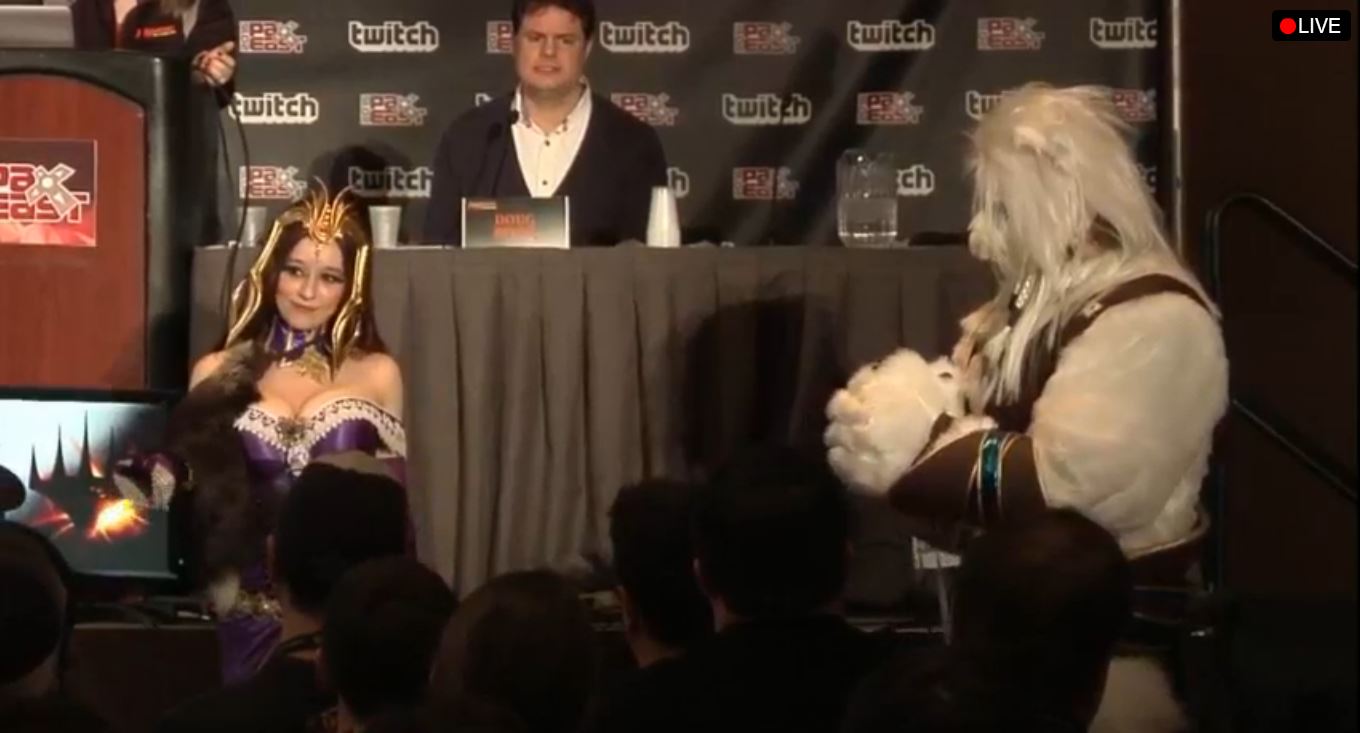 The panel covered four major topics with time for questions.  Let’s take it step by step.

The panel kicked off with the new upcoming set.  First, we got our first peek at the trailer, in which Sarkhan narrates the story of the block and describes how he went back in time to save Ugin, the spirit dragon planeswalker, altering Tarkir’s history in the process.  Alterna-Tarkir is now populated with dragons who rule its human population.  I’ll let the screencaps speak for themselves: 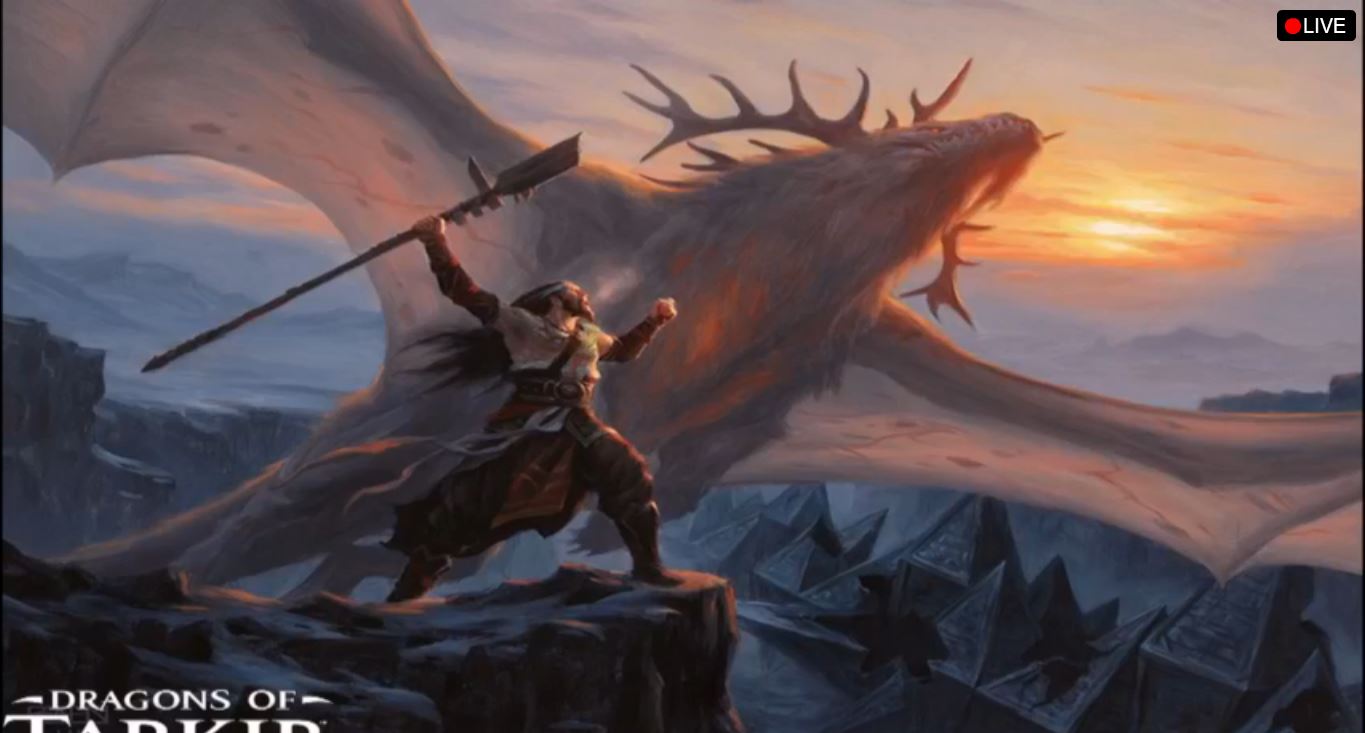 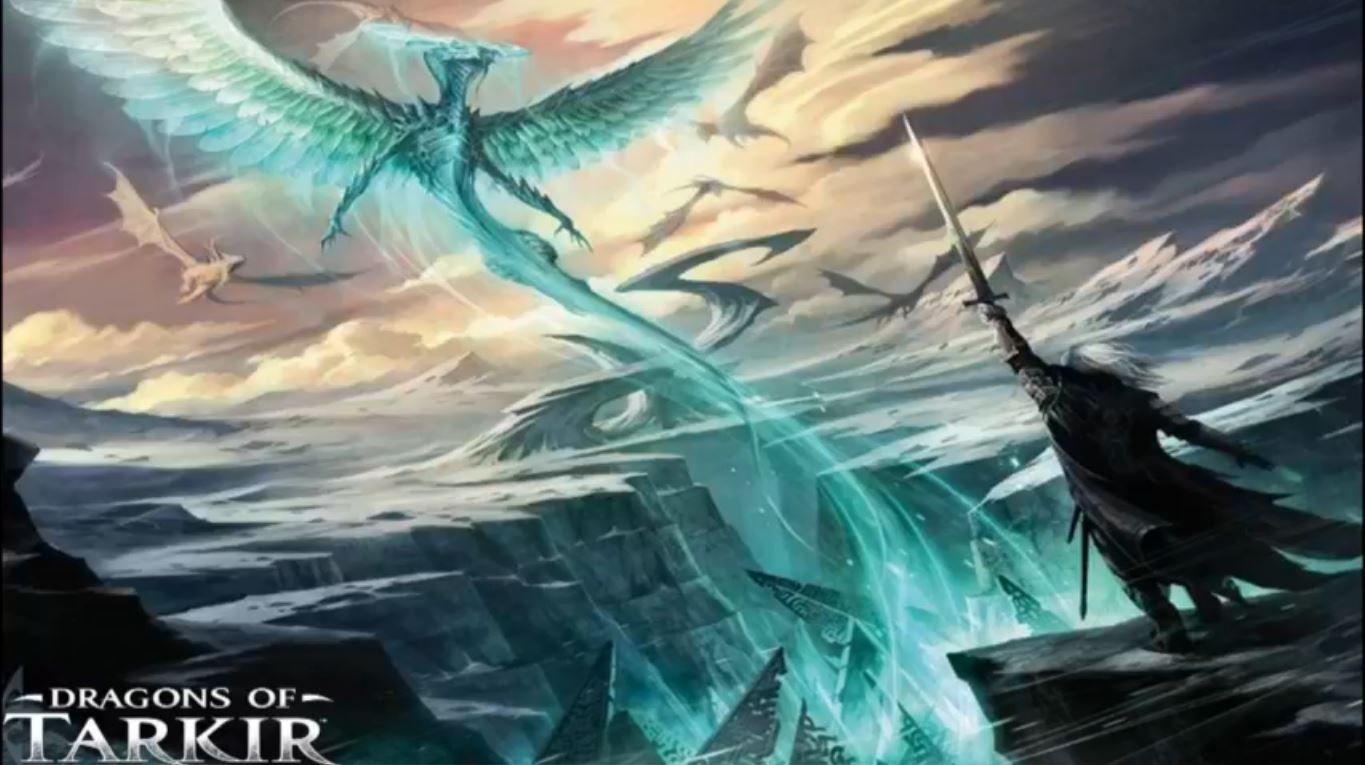 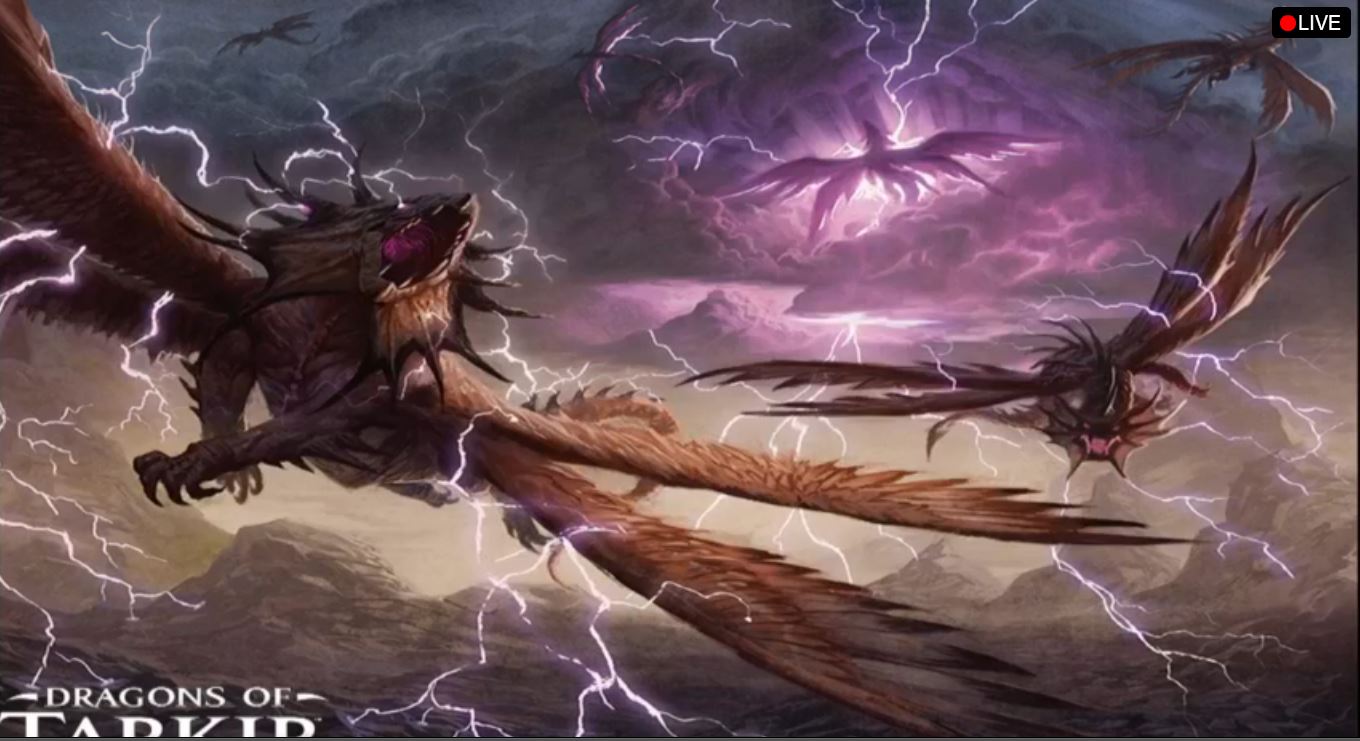 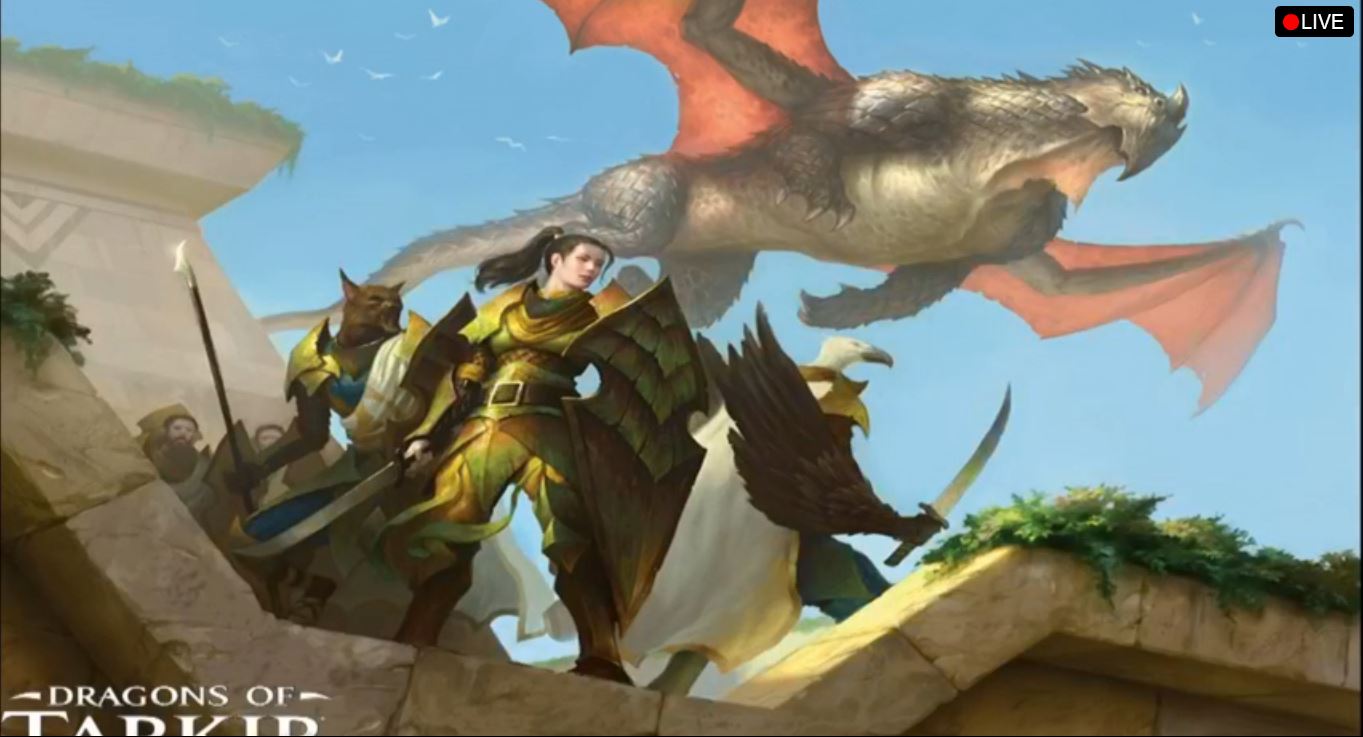 Doug gave a flavor and story overview, explaining how each of the clans have changed.  They’re each ruled by one of Tarkir’s five elder dragons: Dromoka (green-white), Ojutai, (white-blue), Silumgar (blue-black), Kolaghan (black-red), and Atarka (red-green).  The humans and their masters coexist in varying degrees of harmony: Ojutai is a revered teacher, while Atarka’s followers are mostly trying to feed the dragons enough to keep them content.

Dave and Ethan jumped in to talk mechanics.  There are TONS of dragons in this set, it turns out.  (Shocking!)  There are multiple cycles at uncommon and rare, so you should expect to see dragons in a lot of your packs.  They previewed a new one: 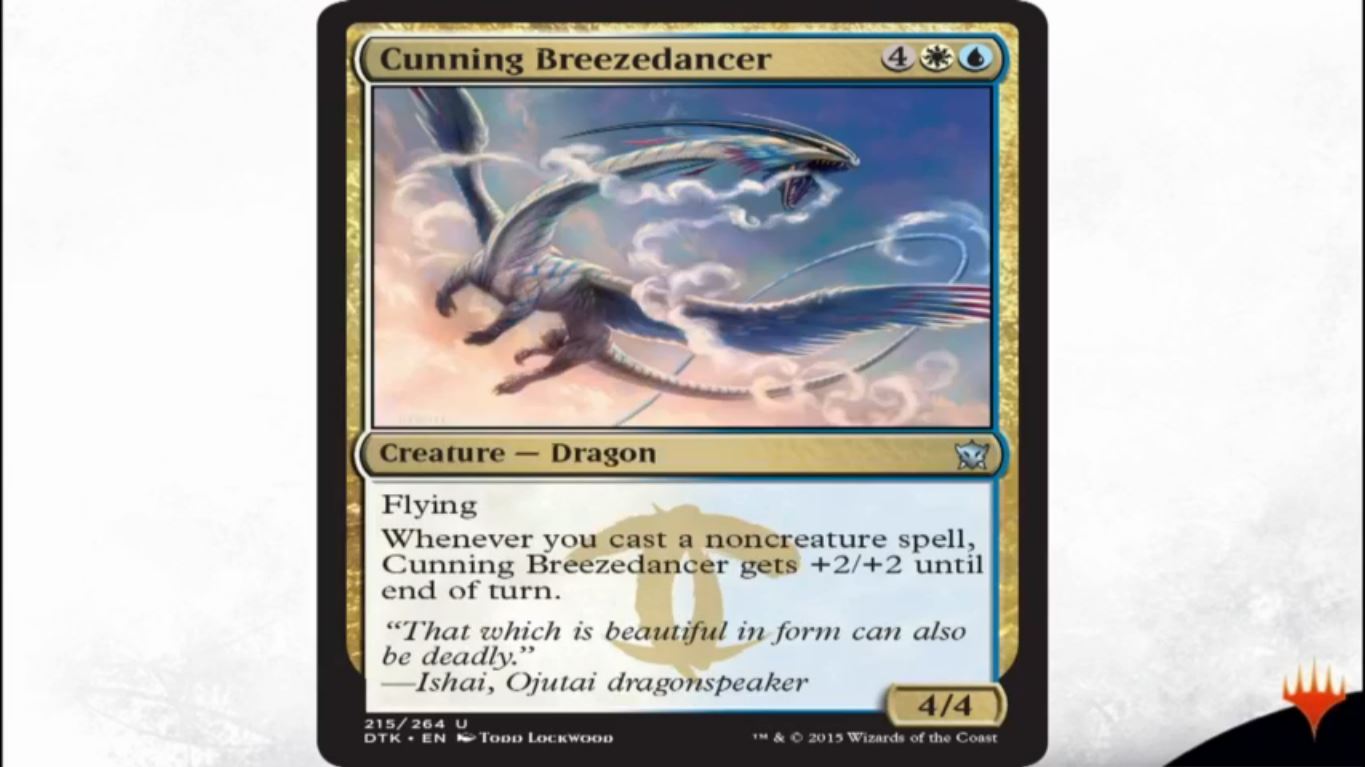 Each “clan” also has its own signature mechanic.  Bolster, the Dromoka clan mechanic—which we saw in Fate Reforged—got a preview as well: 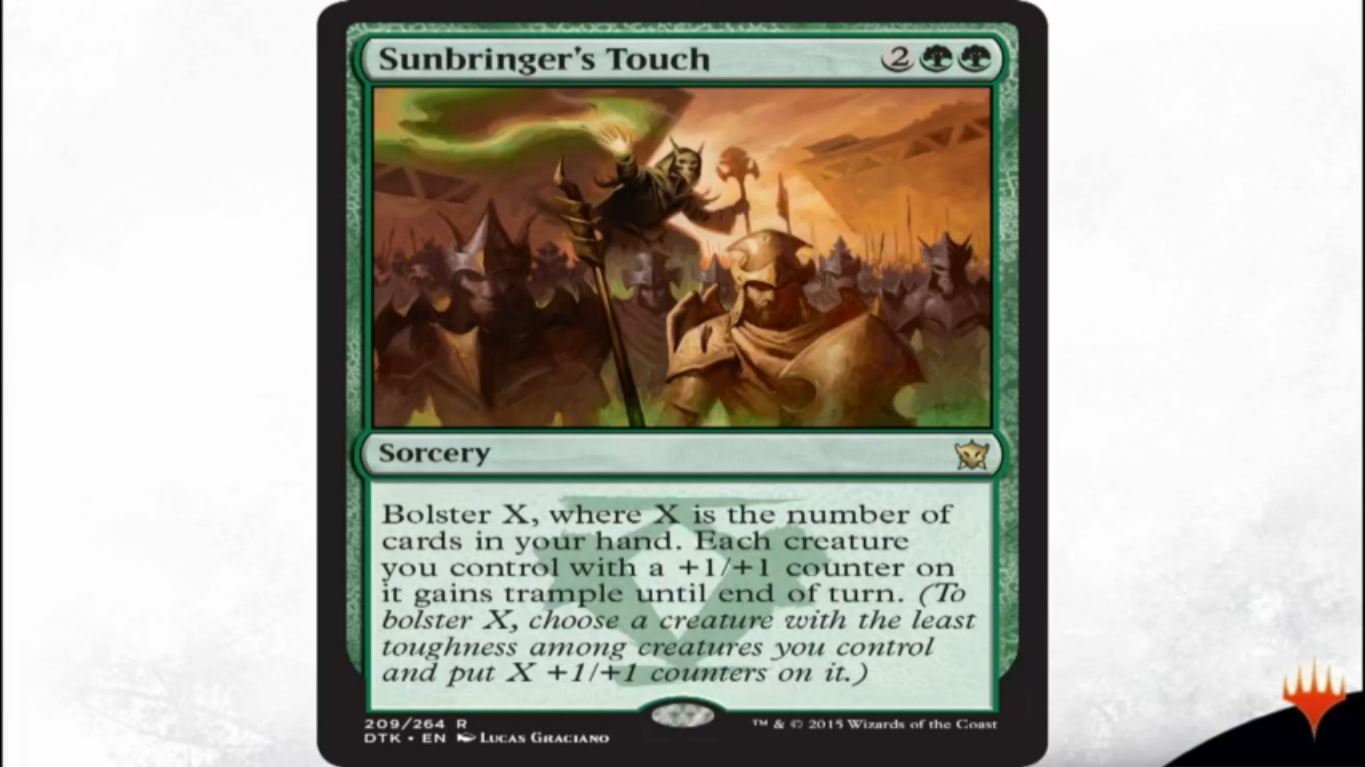 Not to be outdone, Ojutai made an appearance: 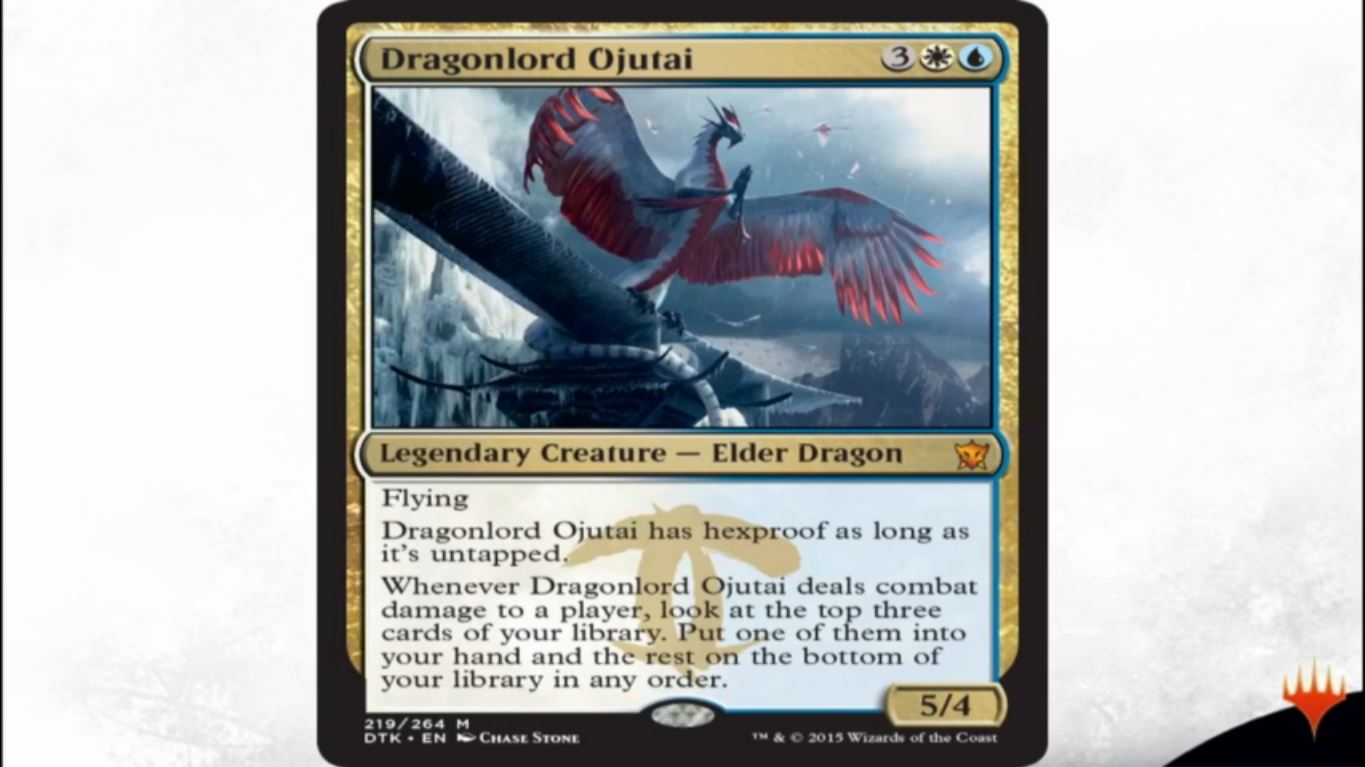 If you were afraid we’d lack for bear-punching, Dragons goes one better than [mtg_card]Savage Punch[/mtg_card]: 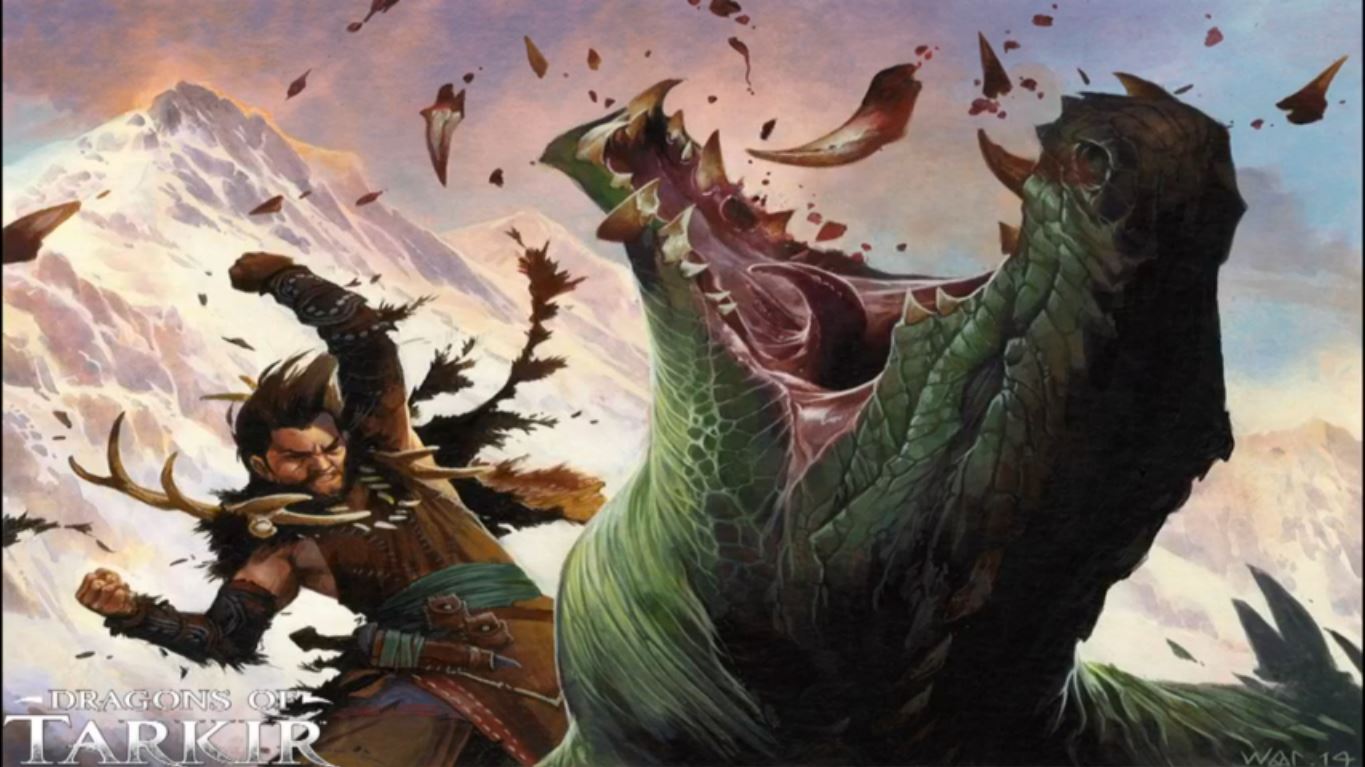 They also previewed the second planeswalker from the block, Sarkhan Unbroken: 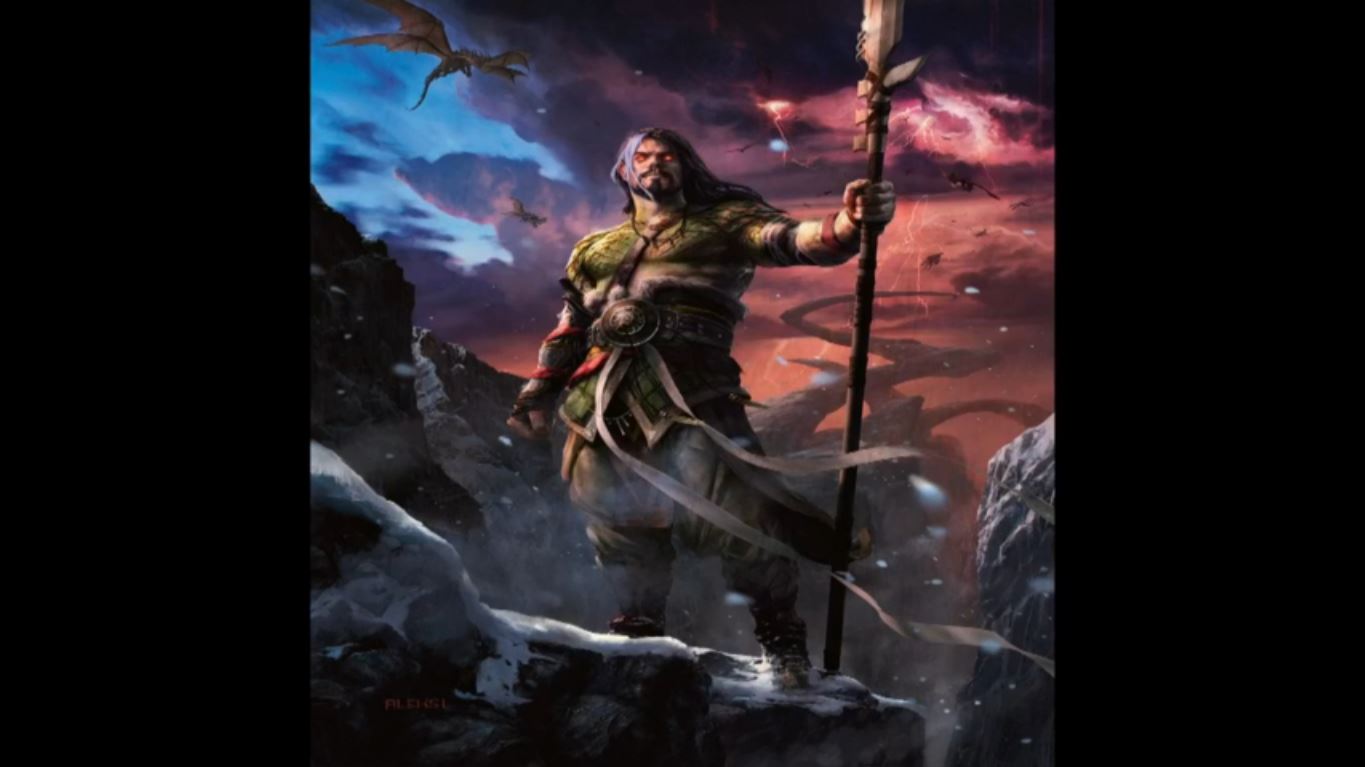 Wait, whoops.  That’s just the splash art, awesome though it is.  Let’s see if we can’t find the card: 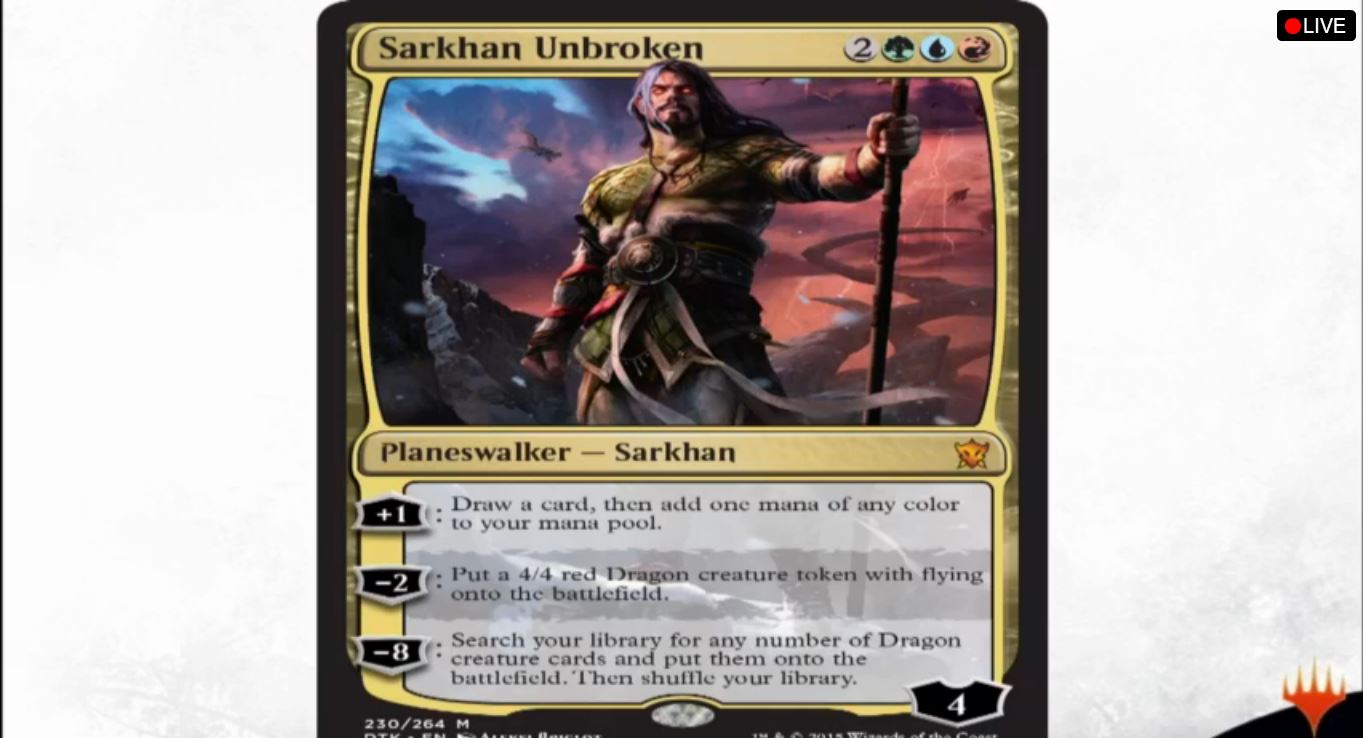 Not bad at all.  The new colors are a surprise, but I look forward to the story twist that adds blue to Sarkhan.  Doug explained during the Q&A portion of the panel that Sarkhan is now an “orphan of time”: in this new history he has created by changing Tarkir’s past, Sarkhan’s parents never met, and Sarkhan himself was never born.

Mechanically, that +1 ability seems very strong to me, as does the -2.  You’ll have to play Sarkhan in a Temur (green-red-blue) deck, but the power he offers is a strong draw to a strategy like that.

Liz chimed in to remind us all about the prerelase (March 21-22), which will feature this dragon breath-weapon minigame you can play with your promo spindown life counters: 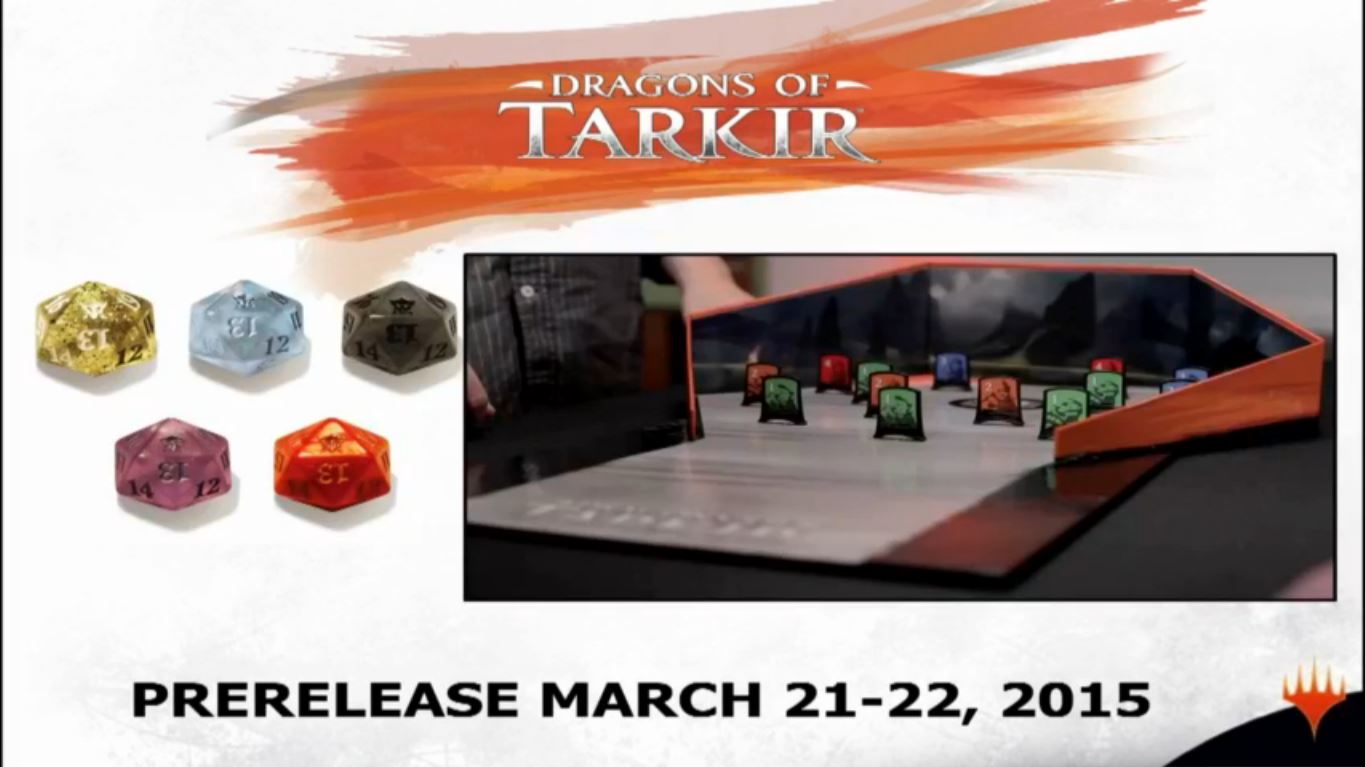 Not a whole lot new here.  The panel emphasized the Modern Masters Weekend which will accompany the set’s release, as three simultaneous Grand Prix tournaments will be played in three cities around the world: Chiba, Japan, Utrecht, Netherlands, and Las Vegas, USA.  GP Las Vegas has a 10,000 player cap (which they are expecting to meet), so this could be pretty epic.

They confirmed that [mtg_card]Tarmogoyf[/mtg_card] and [mtg_card]Karn Liberated[/mtg_card] will be reprinted at Mythic Rare in Modern Masters 2015.

The set will explore the moment of transition when these characters’ planeswalker “sparks” ignited, turning them in the ‘walkers we know today.  Doug emphasized that these characters were chosen because they have important roles in the story to come: so stay tuned.

To emphasize that moment of transition, WotC is pulling out the big guns: double-faced cards are making a return.  Specifically, the set will feature five double-faced planeswalker cards.  As a teaser, they showed us the before and after of Liliana’s origin card: 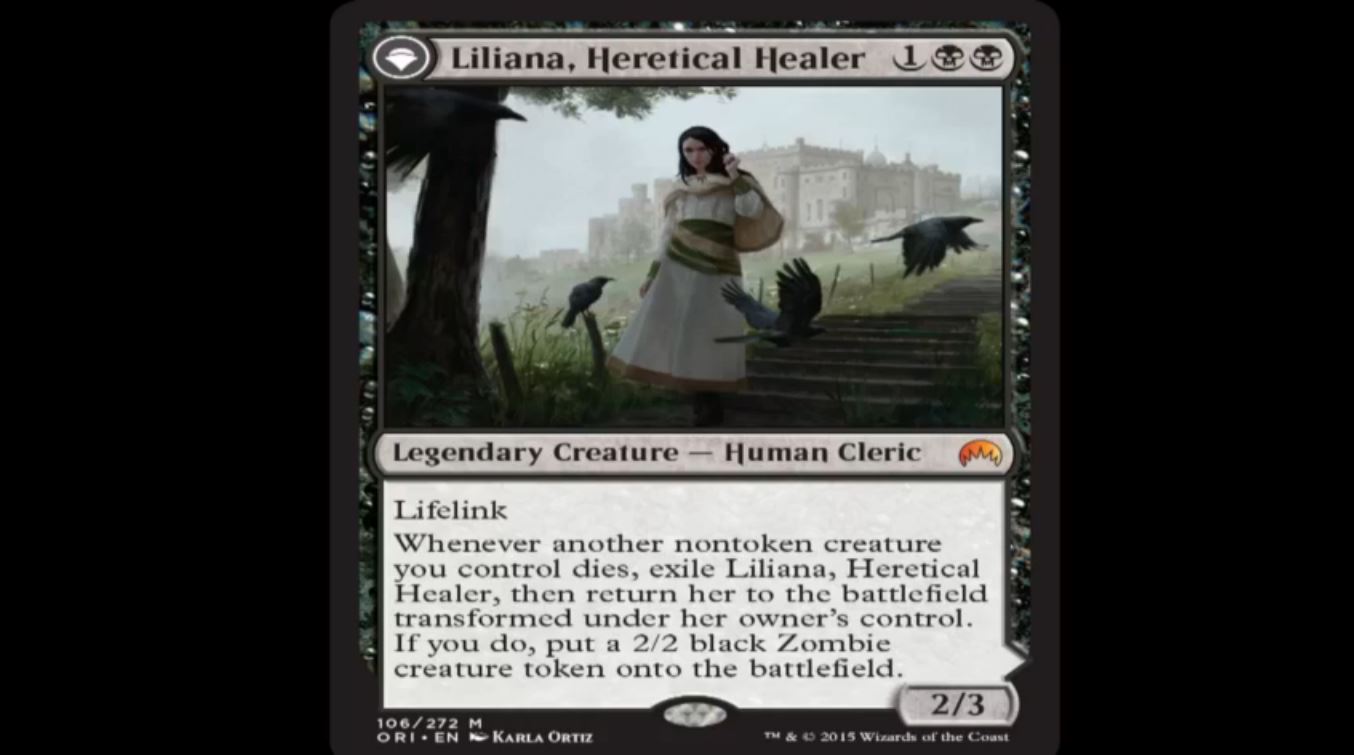 This is a pretty cool little story for a playing card to tell.  As Ethan explained, Liliana used to be a healer, who started investigating forbidden magics in a search for a spell that could save her brother.  She accidentally killed him and reanimated him as a zombie, and the trauma ignited her spark—a tragic moment represented on the card by the transformation condition (which brings back a cute zombie for you to boot).  When Lili transforms, you get her doing all kinds of Lili things: 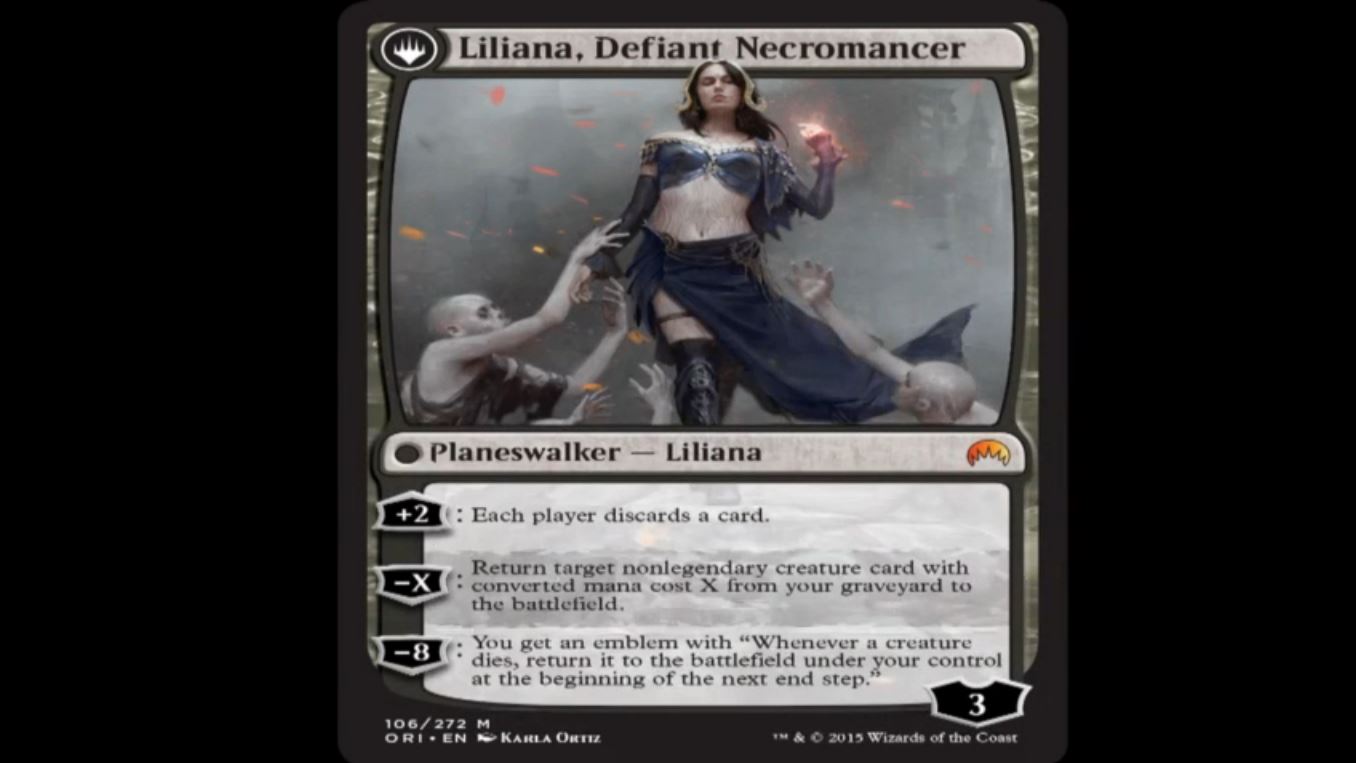 Again, pretty sweet.  The +2 recalls the +Loyalty abilities of both [mtg_card]Liliana Vess[/mtg_card] and [mtg_card]Liliana of the Veil[/mtg_card], and sets up the -X nicely.  My friend Aaron points out to me via email that all you need is a self-sacrificing creature to make Lili a three-drop planeswalker who immediately goes to 5 loyalty (with a 2/2 former brother blocker).  You can also reanimate whatever you sacrificed, if that’s not enough.

Dual-faced cards returning is a pretty big shocker.  In his podcast series, Magic Head Designer Mark Rosewater has repeatedly mentioned the logistical difficulties (especially printing costs) which keep double-faced cards from being a tool Magic can use all the time.  It would be a major surprise to see just five double-faced cards in the set.  During Q&A, Liz mentioned that there will be checklist cards in boosters, like there were in Innistrad, so I wouldn’t be surprised to see more cards like this.  No clue what they might represent, though.

The panel closed out the “Magic spoilers” portion by plugging the upcoming Magic Duels Origins game, which looks to continue the popular Duels of the Planeswalkers series. 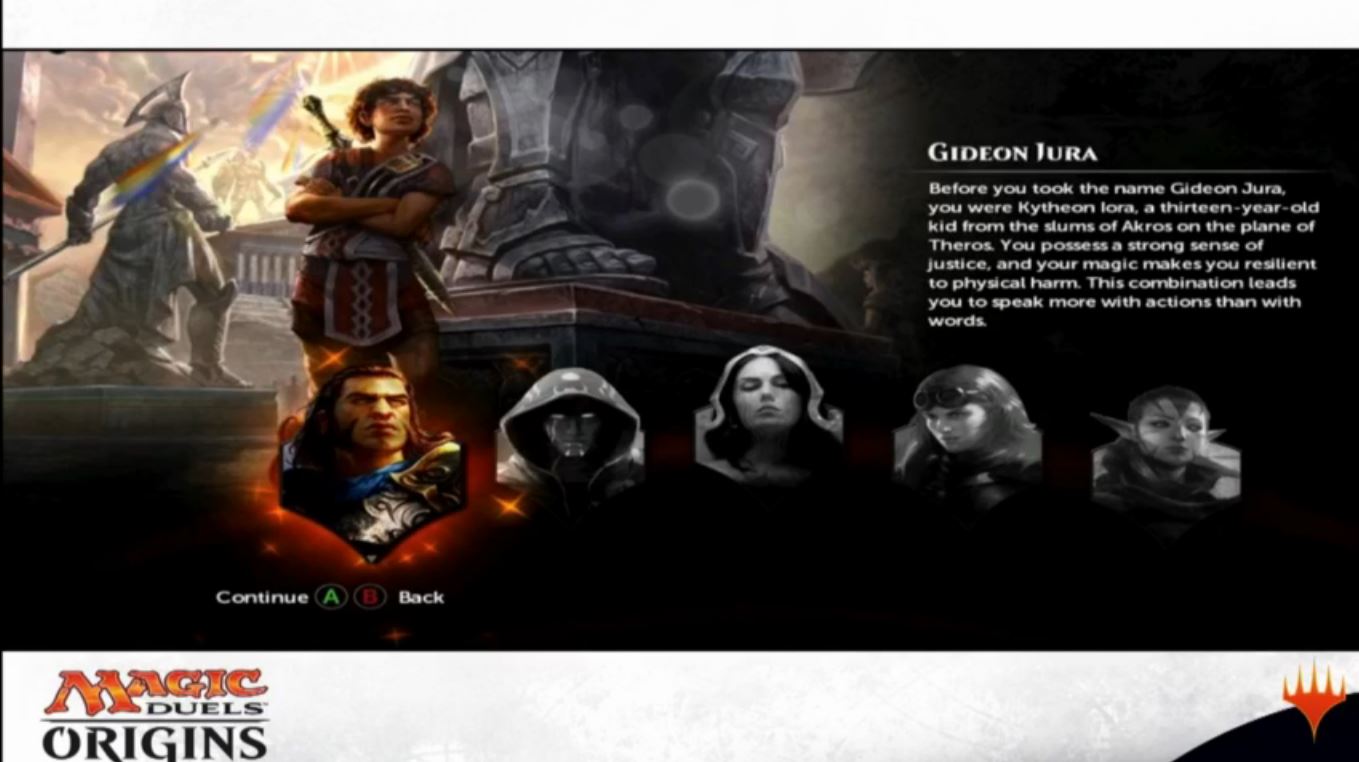 The game will give you the opportunity to play through the origin stories of each planeswalker.  The popular Two-Headed Giant mode from Duels 2014 will return.  The biggest news is that the game will be entirely free to play: “all gameplay 100% earnable,” to quote Liz.

Duels origins will be available on iPad, Steam, X-Box One, and PS4.

The panel concluded with a half-hour Q&A, including questions tweeted in from viewers at GP Liverpool.  No big news was spoiled here, although the questioner asking if we would ever see a third Un-Set (Magic’s joke-set series) got a big ovation, so hope is still alive.  We also got to see an adorable eight-year-old ask everyone who their favorite planeswalker was.

OH WAIT: the last thing in the panel was a short clip of video, which showed floating islands, a hedron stone, and this screen: 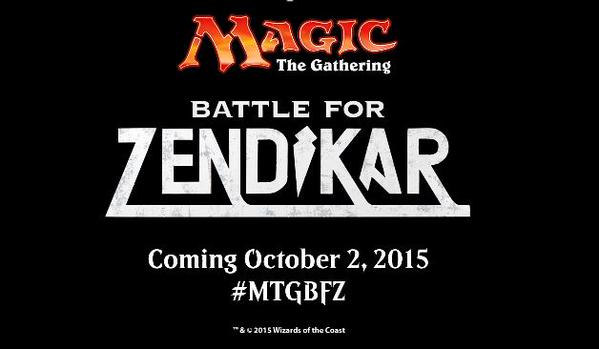 Personally, I’m most excited about those double-faced planeswalker cards, but I’m curious to hear what you’re most pumped about!  Sound off in the comments—and if you’re having fun at PAX East, let us know what you’re up to!