Graham-Jones’s Mongrels was a sleeper hit for me from 2016, a story about a young man who’s a late-bloomer in his family of werewolves. Did it say anything new about that beaten-to-death subject, the werewolf? Not really. Did it say anything new about the people who are werewolves? Hell yes. It stripped away all the stereotypical glamor of money and power and sexiness from the human side, turning werewolves into trailer trash, and then made everything newly beautiful and tragic because of it. Tragedy is old hat for creatures of the night stories, but Graham-Jones pulled a rabbit out of that hat anyway (and then his characters promptly ate it).

I was excited, then, to see a novella in the works, and Mapping the Interior is much in the same vein. Junior and his family used to live on the reservation, but after his dad died, his mother moved them away. They get by on their own, with Junior providing a lot of care for his little brother when his mother isn’t there. Dino has a seizure disorder and some kind of developmental delay, and Junior does his best to teach him and protect him from the bullies at school. But Dino really needs more help than Junior can give. 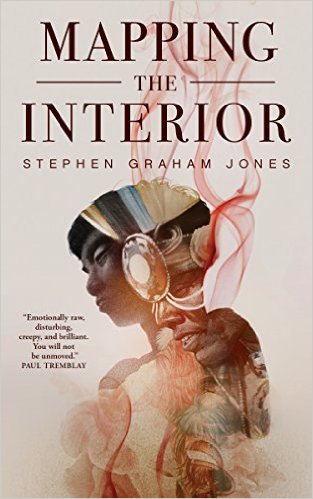 But one night while not-quite sleepwalking, Junior discovers that he isn’t alone. There’s a presence in the house. Around the house, above and below it. Something that leaves a bead, the suggestion of porcupine quills and feathers. A ghost shaped like the fancydancer his father always wanted to be, and never became in life.

Junior knows his father has come back–knows it with the immediate conviction that children can have but that adults lose, and so his mother doesn’t really get it. In her defense, she’s working full time trying to support her sons and has no family or other community. There’s something about the way her husband died, after all: something that will come out in stories that she doesn’t want her boys to hear, and so she moved them far away. But Junior wants to know. And he wants his father back. He knows it will make everything better. So he sets out to help.

Junior has an instinctive certainty of how to go about this, doing his best to see and encourage his father, his brother, and his mother all to return them to the family they were before. He’s sweetly naive in this way, but also quite hardened in others. Poverty and responsibility have jaded him, which make his pure-hearted determination all the more affecting. He has lost his home and his father; his brother is getting worse; he has only gained bullies and a vicious neighbor and a ghost. Let him gain something, for once!

Tragedy awaits him, of course. Ghosts don’t heal homes; their mere existence is a reminder that something was taken, not added. What Junior craves is permanence, but ghosts are not stable entities. They’re tied to purposes, to places, but not to people, because people are always changing. Especially boys on the cusp of puberty and, more ambiguously and ambitiously, manhood. The dead are a poor substitute, capable of dramatic action but not sustained contact. Ghosts and kids are in some ways distorted images of each other: their wanting outstrips their abilities. The need so much to be a part of the world they see, and they have so much unspent potential. But time is against them, and Junior especially finds that time can be cruel. And dangerous. 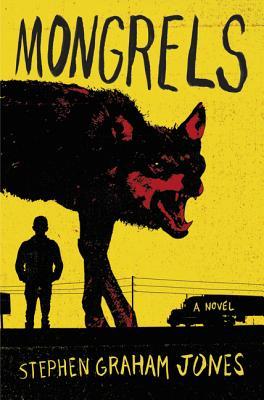 Speaking of time, there are two major shifts in the book and both are a little sudden. I love Graham-Jones’s narrative style and could easily have done with more exposition, but it’s still sufficient to the story as is. Both of these shifts (I hesitate to call them “twists” since the term is overused and is more about revelations, rather than permanent changes in tone) were very unexpected but made complete sense, something that always makes me happy. Mongrels had a similar tendency to pull the rug out from under the narrative, showing you that the world you thought you understood was really more the result of the characters’ (subjective) psychologies than any kind of absolute reality. Graham-Jones’s ability to destabilize reality without falling back on tired “unreliable narrator” tropes (aka, “the main character was the murderer the whole time” or “the main character and this other character are the same person”) is a great way to then examine the supernatural because he doesn’t make it a matter of absolutes. It’s not real/unreal or good/bad. It’s just a lot of people–dead, living, between–on the brink. Of what, you ask?