Assassins are popular these days.

His Fair Assassin trilogy, which I thought was going to be stupid but which was a dazzlingly well-researched historical and religious drama, and Godsgrave, which was a crazy-cool assassin rock concert at full blast. Hit is about corporate assassins, and Throne of Glass is a competition for the best assassin. I was thoroughly underwhelmed by the latter, and I was ready for a new take. Linsey Miller is taking up that challenge with Mask of Shadows, also about an assassin competition, but more like The Hunger Games in that the competition involves picking each other off to win.

Sal is our assassin, a bandit who has larger and darker dreams than ripping off carriages by the side of the road. As a child, Sal witnessed the bloody end of a bleak and cruel war, and now they want their vengeance. 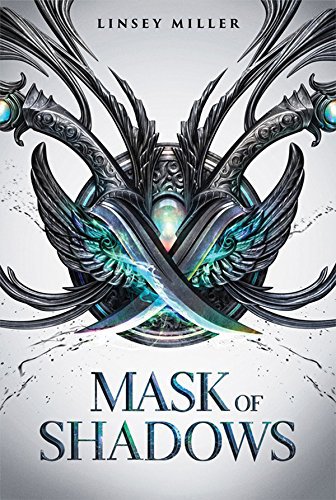 Yes, they. Sal doesn’t hold to one gender, and they are male or female or neuter depending on how they feel. For the sake of convenience, they dress according to the pronouns they want others to use. Mask of Shadows is a great exploration of gender but it’s not about gender. I see a lot of stories focused on self-discovery—and that’s awesome!—but not everyone has the luxury of protracted self-examination. Sal found out who they were while under the thumb of a ruthless gang lord, and asserted themself as safely as possible while also having to make concessions to make their changing gender identity apparent to others. They had so much to cope with, and they found a way. That’s an important story to tell too, and I applaud Miller for doing it so well.

Miller likewise pays attention to the realities she has set up with her world—the flux of commerce and power, the economic consequences of the loss of magic, and the difficulties of peace. The setting is solid: two nations uneasily united under one conqueror-queen, a woman whom Sal worships as the woman who ended the war. This almost chivalric devotion is unusual in modern fantasy, so it’s pleasant to see such uncomplicated faith and optimism.

The queen has empowered her Left Hand–her closest confidants and deadliest assassins–to choose a new member after one of their number is killed. The Left Hand calls for “auditions,” and Sal volunteers, thinking it will get them closer to both the queen and revenge.

The members of the Left Hand seem vaguely likable and interesting but not terribly distinct from one another as characters. Other auditioners are likewise hard to distinguish even when Sal begins to know them a little. They die quickly but (with a few exceptions) not very notably. There are no gruesome or heart-wrenching details of their deaths, no impressive feats like getting killed in a locked room or a bare field. And since Sal has no emotional connection to any of them, they barely make any impact. That’s not really what you want when you’re telling a story about a competition to become the next Super Awesome Death Ninja.

Their successes and failures also feel muffled by the writing. Some authors are adept at throwing you into situations and then gradually peeling back the layers, making the whole book a mystery you’re constantly examining. Gene Wolfe is a master, and Genevieve Valentine isn’t far behind. But to do this, you have to reveal what but not why. Unfortunately Miller stumbles at times with revealing what. There are frequent instances of scenes that do not properly introduce the action, and I don’t just mean the fighting. I mean that I had to frequently page back to determine that, yes, people were suddenly reacting to things that had no antecedents. Let me give you an example: some of the candidates are eating dinner and then suddenly they are reacting to someone talking about important notes. We don’t see these notes described and we don’t understand how (or even if) they get from one person’s hand to another’s until specific characters react. And the conversation does not reveal the action in any way–they could be hiding these notes, passing them out, having servants take them to hand out, etc. I may get the gist (sooner–or later) but I can’t actually picture things.

Now, I sympathize with this impulse. You don’t want to over-describe, and snappy scenes feel good to write and to read. There’s also perhaps a certain new-writer shyness or embarrassment around writing too much and having your prose seem purple or amateurish. But Miller is leaving us out of basic mechanics, making it harder to picture the flow of the action, not easier. She’s also shooting herself in the foot a little, since mechanical actions are just as useful as dialogue or emotional descriptions at conveying mood and intent. As she settles into writing I think this tendency will fade, but right now, it’s really distracting.

The narrative as a whole is also bumpy. The auditioners’ training is oddly protracted, and I’m not sure I like the structure—it seems unfair, and not terribly interesting on top of that. Perhaps it’s a good way to gauge candidates’ ability to learn and adapt, but it seems rushed. They’re supposed to learn a huge range of skills, but only the basics, and we don’t even get to see most of those basics. We don’t learn cool or interesting things along with Sal, we just hear that Sal learns about archery, or poison, or what-have-you.

Sal seems more lucky than skillful—they depend very heavily on their servant Maud despite frequent assertions of mistrust, and they find ways in and out of places without anything going wrong or putting in much time or work. I like to see characters who either work harder than everyone else, or who are cleverer or more talented than everyone else in a tangible, demonstrated way. We understand that Sal is a good thief, but we don’t see a whole lot of it. At several points they pick locks on buildings within the palace or owned by very dangerous people—yet they are able to overcome these locks with equal finesse and blasé. How did a highway robber learn how to get through the best locks that money could buy? Their former master didn’t seem the teacher type, and lockpicking isn’t always simple.

The politics of the realm are also far from simple, yet Sal doggedly persists in assuming they are. Vengeance can make a person myopic, sure, but even as Sal learns how complex some situations and people can be from their romantic interest, they fail to apply that lesson elsewhere. They murder nobles and believe it will help the realm, yet they have no idea what kinds of long political games the Queen they profess to adore is playing. They could be ruining things and would never know—but of course, they aren’t. Things work out for Sal. Sal gets to be the hero, even when others have to be borderline incompetent for it to happen. And Sal gets to keep their illusion of righteous vengeance while also sidestepping the hard questions of compromise and the greater good.

A hypocrite would be an interesting flaw for a character—so often we have characters who are conflicted but ultimately honest—but I think it’s not one Miller meant Sal to have. We’re supposed to sympathize with Sal’s purehearted vengeance, but they were willing to kill strangers on command. That’s morally grey at best. Sal doesn’t get to condemn other’s hard choices and retain credibility as a paragon of virtue, and it’s a huge misstep for Miller to demand our continued sympathies for them in that light.

The ending sets up a sequel, which I will probably read so long as it comes out next summer. Mask of Shadows was a good beach read, enough for a weekend away. It was fun enough and diverting enough, but the next book will have to be more than enough to compete.